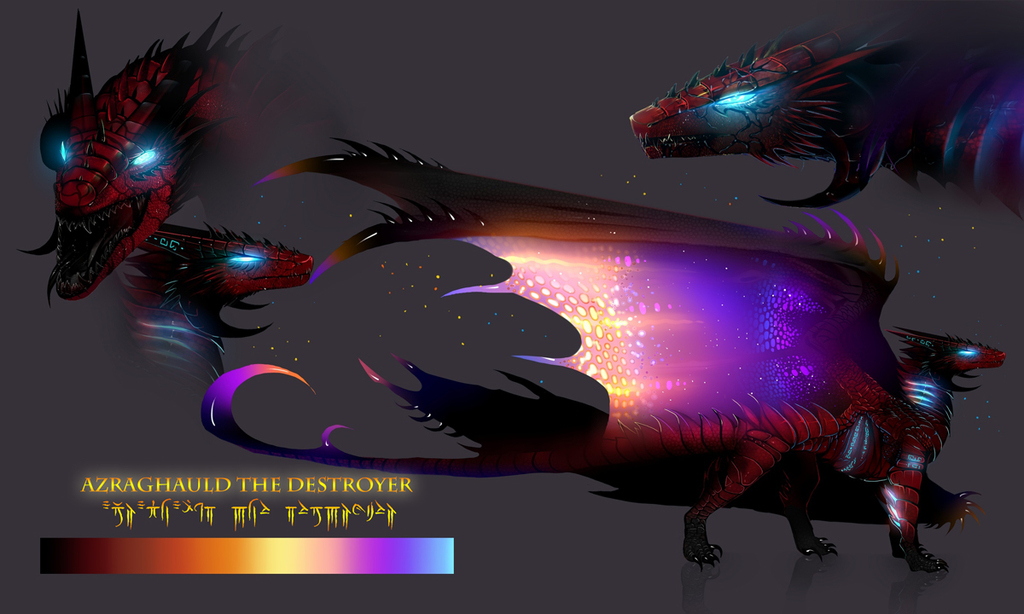 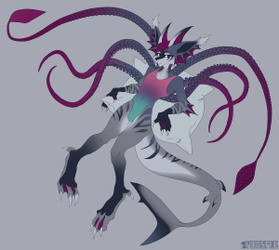 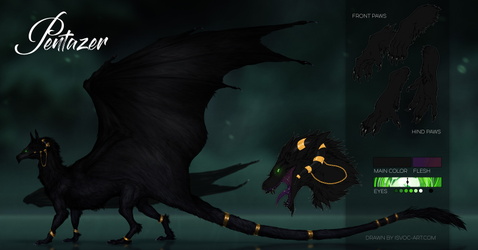 Azraghauld the destroyer first appears in historical accounts during the year 5,766 of the Second Era. Initially Azraghauld was the slave dragon in service to a powerful arch mage who kept him as a mere guard dog and for nothing but prestige. Little did the dragon realize that one of the servants of the wizard was actually demon loyal to Cargain, the supreme god of passion and master of ambition. The demon in disguise whispered words of encouragement of the disenfranchised reptile, coaxing him toward rebelling, grooming him for something far greater that the demons had in store. Eventually Azraghauld did rebel, with a well setup plan faciliated by the demon. From there the dragon went on a campaign of domination to grow his own power, eventually inheriting the legendary Demon Castle: Firegate in the blasted lands of Nadir's dark wastes. There, Azraghauld set about establishing his power base, becoming a dragon lord of terror and master of demons. As his soul fused with the dark powers of Firegate he inherited the awesome power of the Black Flame, an eternal source of magic, ambition, tyranny and domination. With the immortal power the Black Flame gave him, Azraghauld donned the infamous title of "The Destroyer" and unleashed his fearsome ability to grow to a titanic, mountain-sized dragon (albeit only temporarily). Over the course of the next few hundred years, Azraghauld used the chaos of the New Gods war to unleash chaos and havoc upon the Realms. He disappeared from most records during the first decade of the 6th Millennium, when the legendary Heroes of Dawn defeated him on their way to slay the rest of the New Gods. Azraghauld would go on to be the greatest threat to the Realms after the gods were dead, up until his final defeat sometime during the second century of the sixth millennium. Azraghauld's death resulted in the shattering of his soul and the scattering of the Black Flame across creation where the dark power tempts mortals with promises of grandeur and ambition. Azraghauld seeks to draw all his disparate parts together and eventually return to power one day, but that was over 6000 years ago from the present date of the Chronicles of the Realms. Whatever happened to the great dragon and where, or how he exists in limbo when all the gods and divine realms are dead, is a mystery... to most.

This fantastic piece of art was an adopt from CaaVaran17

Thanks for finally providing me with the art to one of my very first dragon characters in the Chronicles of the Realms!