Strangers and Rumors (Story) by Pattarchus 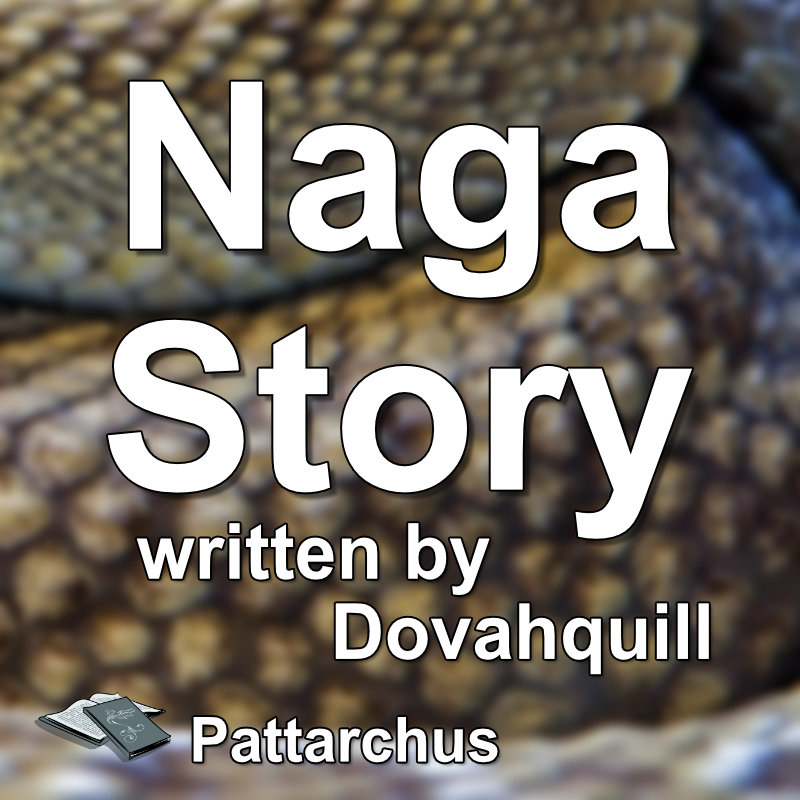 Over the next two days, Deliah and her family participated in the festivities and gift giving. As the merriment began to wind down on the third day, Granny Gisela visited the young doe once again to bid them farewell.
“You should visit more often,” the crazy cat lady admonished, “your family gives me something more exciting and sensible to look forward to. Most town ladies still believe your family has some kind of enchantment with those fancy dyes you use.”
“We might,” Deliah answered warmly, “father said he struck a new deal with one of the local guilds for those same dyes. We will at least visit next year again.” As she bid her older friend goodbye, her thoughts turned back toward the enigmatic stranger she’d met earlier. Her curiosity had vexed her greatly, and she regretted her childish fear around the serpentine male. “Have you seen the um… the deathsman since the first day of the festival?”
Granny Gisela shook her head, “He usually only comes out the first day to buy the barest necessities. As I told you,” she wagged her finger this time with her other hand resting on a gnarled walking stick, “he’d about as interesting as drying paint.”
“I don’t know,” Deliah protested, “he struck me as aloof.”
“Oh,” Gisela placed one hand to her sagging forehead, “has the brooding stranger captured the heart of the young maiden?”
“No!” Deliah denied even as her fur reddened in embarrassment, “I just enjoy meeting new people, and this is the first time I’ve seen him.” She crossed her arms and frowned.
“Calm down, girl,” Gisela chided, “let an old lady have her jests. It’s one of the few reprieves from old age. Furthermore,” she again began to wag her finger, “if you’re so curious, why don’t you bake him something and knock on his door?”
“What? Why would I need to bake him something?” Deliah continued to work on packing up the bolts of undyed linen as she asked with a confused expression.
“Well, it would be rather obtuse to show up with no other reason than to interrogate him,” the dry tone Gisela answered earned a scowl from the young doe, but the elder merely smiled and continued, “if you do, I’ll go with you.”
“Really?” Deliah asked, her curiosity rising. With her older friend, Deliah felt the lingering anxiety settle, “Okay, if you come, I’ll bake and visit.”
“Good,” Gisela answered with a huff, taking a seat on a packed crate, “it’ll be the most excitement I’ve gotten in years. I still remember…” Deliah tuned out her friend as she busied herself. If she were to bake something and pack, she needed speed.

Another two hours passed as Deliah finished packing. Her father had elected to stay another night, so the young doe nabbed a spare pastry from the family kitchens and slipped away with her eccentric friend. The sun sat low in the west. Sunset lay only a short time off, and her father bid her return before dark.
Gisela promised they would have time as the executioner only lived a short distance from the town’s edge. Deliah tried to keep the pastry warm by wrapping it in a spare cloth, but it smeared the frosting on it. The Granny went on and on about some of the more interesting she’d met during her long life in the town, one of which was her second husband.
Deliah paid the rambling little mind aside from the wry comment to herself that Granny Gisela conspicuously forgot to include herself on the expansive list of interesting and eccentric townsfolk. Her thoughts mainly centered on pondering what the interaction would be like. In her short life she had walked or ridden through six different countries, and each had a unique flavor to itself. This stranger hadn’t been like anything she had seen, so her curiosity matched that of Gisela’s.
“I think his name is Ashy or something,” she said when his house was in sight. It lay just a short distance beyond the hangman’s scaffolding outside the town’s entrance. “Wouldn’t surprise me. He looks like a shiny fire-pit.”
“Granny,” Deliah said in exasperation, “please show a bit more propriety when we visit him.” They now stood only a few feet from his door.
“Propriety, hmf,” Gisela harrumphed, “Hey, Ashy! Come to your door! Two fine ladies want to talk to you!” Deliah’s ears flicked back in embarrassment and dread. Granny merely offered a smile. Despite their glaring contest, both could hear a dragging sound from the other side of the door.
“Yesss?” A cool voice asked with a hissing tone, “What do you need?” Deliah found herself mute at the foreign sight before her. His muscled, sinuous form slid down into a serpentine form. It struck her as truly alien to not move on two legs.
“This gawking lass thought you left-out of the celebration,” Gisela said with perfect candidness, “so she brought you a pastry.” The doe moved her eyes up from his snake-half to his eyes and mechanically offered him the pastry.
“It got a little smudged by the cloth, but it should still be warm,” Deliah said softly. She watched inquisitively as he unwrapped the berry filled dessert and used a single finger to taste it.
“It’sss good,” he said in monotone, “Thank you.” He paused for a moment, then glanced back and forth before he asked, “Am I sssupposed to sshare thisss with you or invite you in now?” The question came out in the same even tone he used in each interaction. Deliah found herself again slow to speak, but the ever witty Gisela didn’t hesitate to respond.
“Not really, though I could use a box to sit on,” she suggested, “You could answer a few questions to sate her curiosity if you’re feeling generous for her attempt to include you.” His slitted eyes shifted back to Deliah who offered a nervous smile. Rather than resenting Gisela’s unfiltered words, the young doe wished she possessed the same carefree confidence.
Without further words, the naga fetched an empty crate and turned it upside down for the old cat to sit on. He then folded his arms and waited for the questions. Silence lingered awkwardly for another minute before he voiced his readiness, “What questionsss did you have?”
“Well,” Deliah said, finally mustering her courage, “what is your name?”
“Ashoszzz,” he answers immediately.
“Do you usually join in festivities?”, she asked.
“No,” a short answer silenced Deliah as her earlier anxiety began to resurge. Finally, she felt compelled to ask.
“We’re not bothering you are we?”
“No,” again the same direct answer. His foreign appearance didn’t help her in discerning his feelings. Despite the embarrassment that accompanied it, Deliah once more lapsed into silence, and she regretted the mistake when Gisela commented again.
“Do you eat dead bodies of those you execute?” Deliah blanched at the blunt and question. Deliah thought she might’ve glimpsed a shift from Ashosz. Did that mean anger or offense? She couldn’t tell. The naga simply turned his gaze to the old cat and answered as he did.
“No.”
Silence again reigned until Gisela muttered, “Told you he wasn’t that interesting.”
“I’m sorry,” Deliah finally apologized after the comment, her anxiety at the brim and regretting the venture. She felt like a fawn again who spilled dye all over fresh linens.
“It’sss fine,” he answered evenly, “I sssatisfied your questionsss?” Deliah hastily nodded while Gisela shook her head. He brought a fist to an open palm and flexed out his hood to its full extent. Deliah stumbled back a step surprised by the gesture, but Ashosz bowed low. Not knowing how to respond, Deliah gave an awkward imitation of the motion. When the both rose, Ashosz gave tilted his head slight, “Thanksss.”
With a nod of acknowledgement, Deliah took Gisela by the arm and helped her stand. With no other words, the pair of women stood off to the side as Ashosz retrieved his crate and went back inside his house. They stood in silence for a moment.
“I think he appreciated the gesture,” Gisela finally answered, “but he’s pretty boring.” Deliah just sighed in exasperation and began the walk back. 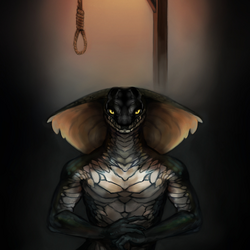 At the autumn festivals of the village Deliah meets their Deathsman for the first time. His very different appearance immediately catches her eye. But a rumor is going around about this Naga. Deliah needs to know the truth and ventures out with a fairly exceptional companion in a quest to find answers for this quest.

Do you enjoy writing stories and are you looking for a place where you can hone your skills, attend workshops and lectures or just meet other like-minded writers?

Consider to visit the

Curious readers and those looking to get started with writing are also warmly invited to stop by and pay a visit!