Li Bao: Monk of the Open Paw - 2011 by OurMassHysteria 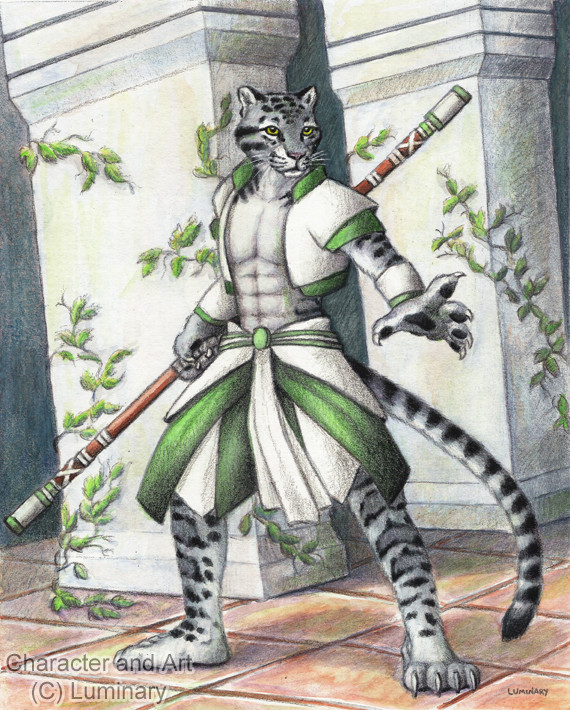 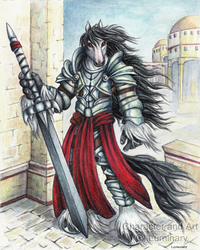 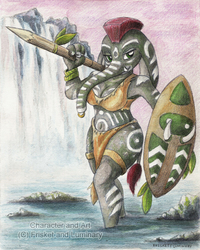 Luminary: Frisket and I took a trip to the Omaha Zoo last spring and I fell in love with the clouded leopard that was there. I had never seen one in person before and had never drawn one until recently. Pretty cool animal!

Color version of the pencil drawing I did earlier. Watercolor and color pencil. More to come!

Story by Frisket! Thank you, Frisket. :)

The dust under his paws sifted as the bison bellowed his challenge. In all his years of training under the great Master Zhu, it was this moment he had prepared for.

The woman and her infant lay behind him, and the leopard lowered his weighted staff. He glanced back to her and nodded. "Go!" he shouted over the rising din of the marketplace. She understood, the deer scrambling to her feet, clutching her baby as she ran. The movement caught the bison's attention and he charged.

Li Bao's claws extended briefly - the years of harsh training and discipline kept his deadliest weapons firmly sheathed as seven hundred pounds of raging death thundered towards him. The shackles on the bison's wrists and legs had snapped in its blood fury, and the steel links whipped around the marketplace, whistling with their deadly intent. Baskets, crates and barrels exploded out of the bison's way as he thundered towards the running deer, focused on her - for what reason, Li Bao did not know.

The leopard stood firm, shifting into his stance easily. His weight was fluid, able to shift at a moment's notice. He waited as the bison charged, the ground shaking as it roared again, this time his eyes shifting to the feline.

Control, he chanted inwardly, his claws begging to be released. He tightened his grip on the weighted staff.

The world seemed to slow as Li Bao focused on the mighty beast, his paws aching to battle, his legs burning to run and fight head-on.

But that was not his way. His way was one of discipline, of courage and compassion. His eyes fell again to the shackles so crudely bolted to the bison's wrists and ankles. By what means came this creature to Zhong Bay? And for what reason was he loose? He was not a marauder or soldier - this creature was little more than a prisoner, a slave.

Five meters. Four meters. The ground shook. The staff swirled before him, and the cat leapt.

The bison had never fought a feline before - or was too far gone. Li Bao landed squarely between the creature's shoulder blades, the sudden weight causing the creature to land in the dirt, snout-first. Li stood atop him and gripped his horns.

The creature snorted and shuddered. Standing atop him as he was, Li could see it was emaciated and starved. That last charge was all it had left. He placed a paw on its head.