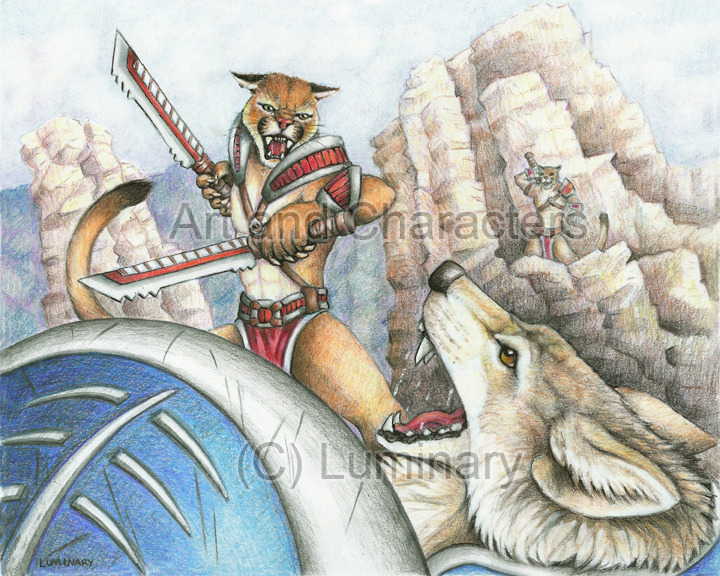 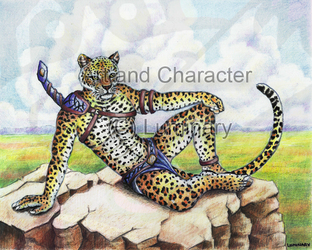 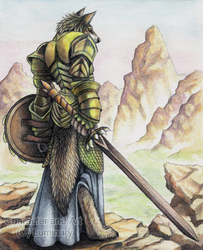 Luminary: Slowing down again. All color pencil with a little bit of white marker. The scanner has REALLY bleached this out. The real drawing looks so much better, I'm mad I can't get it to look right on the computer. Anyway, I hope to make a few prints of this to take to Nakamacan of our artist table. Hope to see you there! :)

Things had turned quickly. Beren's chest throbbed with the hot, stinging pain of the initial strike; warm blood trickled down his flesh, matting his bare fur. He grimaced, his eyes falling on the cart a hundred paces away, already being prowled over by more of the cougars. Inside was his breastplate, the one he'd pilfered from that fat cyon back in Hillsport. His mind drifted momentarily to the relative safety of the Known World, devoid of these beguiling clawhands. He pressed a paw to his stinging chest wound and let out a low groan.

The lithe, earthen-colored feline had surprised him with the desperate attack, and even now the creature flicked the blood from his claws, a look of disgust mixed with amusement painted across his strong jaw. Beren snarled and drew his blade, raising his shield in defiance. He could see another of the felines prowling above on the rocky cliff – why they had chosen this pass, he would never know. The presence of so many cats proved that his own scouts had been ineffective; money well spent, the coyote snarled inwardly, spitting into the dirt.

“Such a long way from your palaces and kings, clawless.” the feline hissed. The coyote said nothing, readying himself, the shield held up to cover as much as possible while he loosely held his blade, trying to predict the cougar's next move, desperate to return blood for blood. The cat laughed and smiled. “This land is not your friend, clawless. It fights you, even now.” the cougar pointed down to his paws, and Beren stiffened. He couldn't bear looking, leaving himself open for attack. His eyes flicked down in a momentary glance and widened, shock and fear rising in his throat. He'd never heard the scorpion's approach, and now it sat poised to strike his foot. It's black carapace shone in the desert sun.

In a flash, the cat struck. Beren's eyes spun as the faster cat caught him in the chest with a strong, lithe shoulder. He fell with a breathless snarl, his blade falling from his paw. Regaining his senses, he brought his shield up in reflex; surely the cat would be upon him. But the cougar stood laughing, his steel shoulders jostling as he stood, his paw crushing the black scorpion with little effort.

“Come, clawless. Fight!” Beren snarled. Things were about to get interesting.