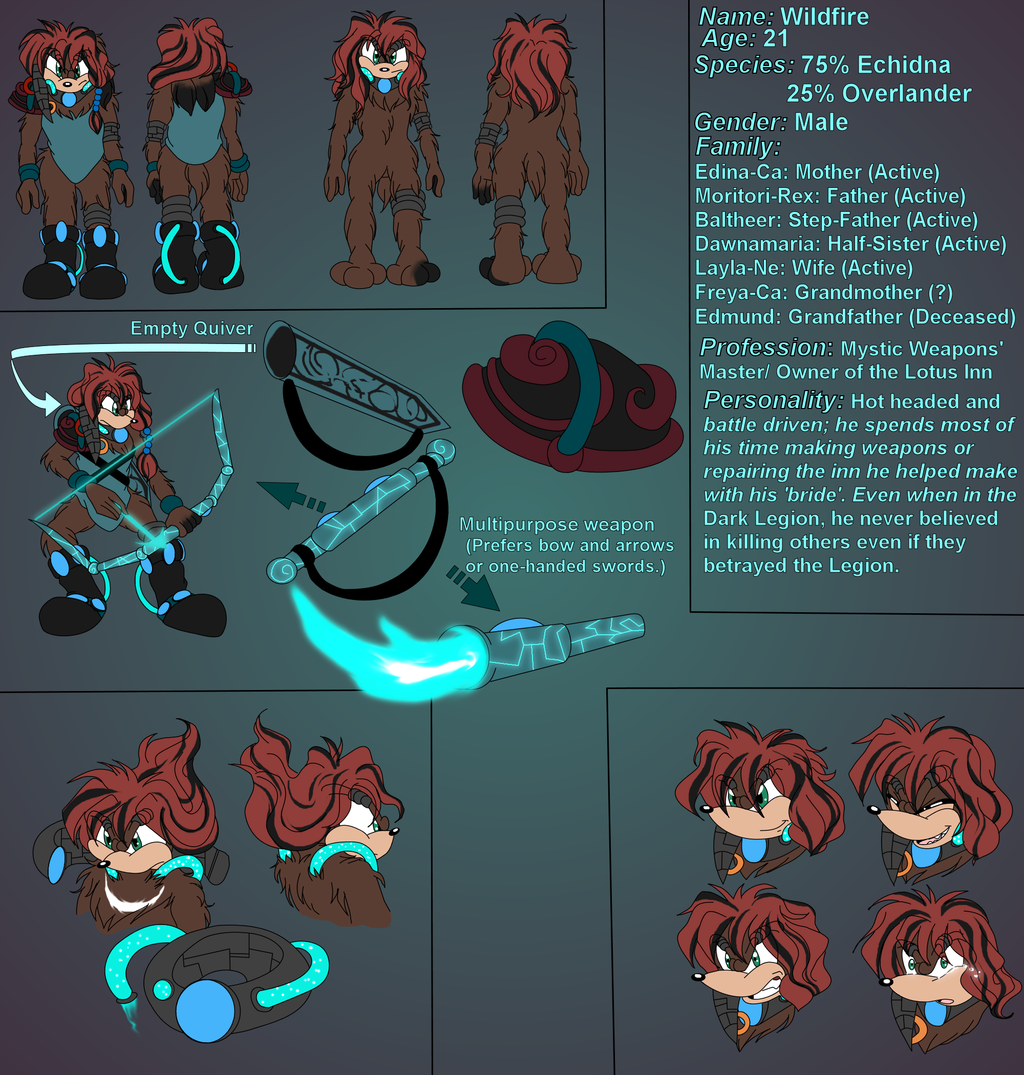 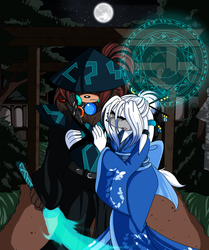 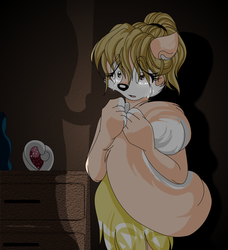 Nygaaaah….:faint: I think, by far, Wildfire has to be the most decorative character I own, so doing this sheet was interesting, and took longer than Layla-Ne’s. XDD However, it is done, and by the heavens, I am happy. X’D I do love looking at his crying face and thinking he stepped on a lego for some reason.

Please read the information below before asking questions~! Also, be warned there are some slight spoilerish things I guess for Chaotically Intertwined below as well, but—to be expected.

Abilities: Being part of The Chimera Order, Wildfire has the cursed, magical blood, which insinuated by the color of his magic and the blood in the tubes of his collar, he would have been part of the serpent class. Since nobody in the Dark Legion knew how to cast magic and train him properly, Wildfire has difficulty conjuring and has an empty quiver to help him focus making his arrows. The weapon he carries with him is usually in ‘staff form’ until the center button is hit to make him transform it into anything he desires (mostly preferring bows/arrows and one-handed swords over anything else he can make). The magical designs in the weapon are parts of his blood, which help the weapon function under his command. Abilities include:

Arcane Arrow: Oddly enough, something he learned on his own without knowing of his grandmother. His primary attack and to which he prefers for taking down anything long distance, as he doesn’t desire to get up close unless he has to.

Arcane Emerald Sword: Using the power of the chaos force with his arcane abilities, Wildfire can create a magical sword from the hilt his weapon becomes. Not having a particular interest in the chaos powers, even when the guardians train him later on, he’ll only use it if he feels the situation is dire enough (thus making it sometimes an arcane sword only).

Acid Arcane Rain: Calling down his arcane powers, he targets a certain spot to shower the area with a horde of arcane arrows. Rarely used unless in group fights.

Appearance: Wildfire has a positive and negative charge to his fur, like he does with his hair, so it gives him a scruffy and fluffy appearance compared to most echidnas. While his hair was long before he was forced to remember his guardian heritage and know the guardians better, Wildfire keeps it long just to spite Spectre, who hates he’s so unprofessional in appearance, so whether or not he likes his long hair is unknown. He hates it when his mother plays with it, and much prefers his bride or children play with it if they desire to.

History: With the attempt to make Spectre a legionnaire a failure, Moritori Rex turned to the immortal daughter of Edmund and Freya-Ca for a means to make, not only a guardian, but one with a magical link in its blood when his other plans fall short. With Edina-Ca unsure of what love is and dire to find it, so that she can age with the one she loves, it becomes all too easy for him to brainwash and rape her. Keeping quiet about the ordeal with active and verbal threats against the Brotherhood and her crush on the constable, Moritori is eventually chased out of Haven when found to be the traitor, and eventually, Wildfire is born.

The guardians coming together to act as a father for the newborn echidna mix, Thunderhawk mostly takes to the role and helps Edina-Ca raise him as she’s still very naive and mentally handicapped from her mother’s youth spell. Wildfire grows up in Haven and looks to Thunderhawk as a father figure out of the other guardians, spending the most time with him.

Upon Wildfire’s sixth year, however, Moritori raids Haven, when they are vulnerable, and retrieves his son forcefully after wounding Edina-Ca in the process. Enraged by these events, Spectre tries to stop the aircraft from taking off with his powers, but is demanded to release them by Sabre, who knows Spectre will only injure the boy in the process of such an aggressive rescue.

With Wildfire knocked unconscious from Spectre’s attempts, the Dark Legion find it a perfect time to look at his magical blood a bit closer and find out that his blood will boil every time he casts. Frowning at this handicap and needing a means to hide the guardian mark anyways, Moritori created the collar to keep the tubes stabilized within his son’s body and hide the mark. Implanting the tubes within his son’s chest and upper back, Moritori got the magical blood to filter away from his vital organs and make it impossible for the curse to take effect. While this would allow Wildfire to cast as often as he liked, he would have to show restrain or the tubes could explode and put him in shock from the feel of the curse striking him.

With Wildfire’s memories erased, Moritori worked on raising his son to be a weapon of the Dark Legion (later, Dark Egg Legion). Instilling in him everything he could about the chaos force as well as trying to get him to use magic properly, Wildfire did have an accident with his magic and hit his left leg—causing the robotic rings to be put there to help him move it again. During his training, he found a love for crafting, which went to being the weapons’ master and even crafting his own multipurpose weapon. Upon Moritori seeing what Wildfire had done for himself, it was then Wildfire was taken mostly off of the battlefield and put into upgrading the Dark (Egg) Legion’s weapons with his own blood—imbuing them with his magic. Because of the blood he would lose, he would spend most of his time recuperating.

Being with the Legion till he was 19, Wildfire attempted a raid on Haven to hack into their main computer and steal some of the Brotherhood’s information. While his memories were still wiped, upon encountering Thunderhawk, the former guardian has a hard time bringing himself to attack the old echidna as the face feels familiar. After a verbal discussion back and forth, Spectre comes from the side and knocks out Wildfire, so that he can be contained and spoken to by his mother (whom he was said left him when he was a baby). Still in disbelief that he’s a guardian, Wildfire is eventually allowed to go back to the Legion, where his memory of the Brotherhood triggers.

Confronting his father about his memories and why he was told lies about why he should never remove his collar (Moritori lied that Wildfire’s neck was wounded badly), Wildfire finds out the only reason he was ever conceived was to be a weapon and nothing more. Being told that from his father’s mouth breaks him, and he doesn’t even have the drive to go after Moritori for ‘revenge’ in the matter as he cries.

Heading back to the Brotherhood, Wildfire only stays with them for 2 years until he decides that being a guardian isn’t meant for him either. Leaving Haven, he struggles with the idea of what to do with himself until he meets Layla-Ne; settling down to become a family man with her.

Notes: Wildfire’s random ‘black’ designs on his dreadlock tips, pinky, ring finger, and middle finger on his left hand and part of his toes are basically his DNA unable to compute enough to make a decent coloration since he has Overlander in him. The random X mark on his chest is him holding his quiver and his weapon, but I never have been arsed enough to draw both on his back, but I kept the black X all the same. The robotic part of his arm is actually where he hides some of his tools. (Shrinky dink). The robotics on his eyes are no doubt Moritori’s trademark and a means to spite the