Introducing my OC's by Onodera 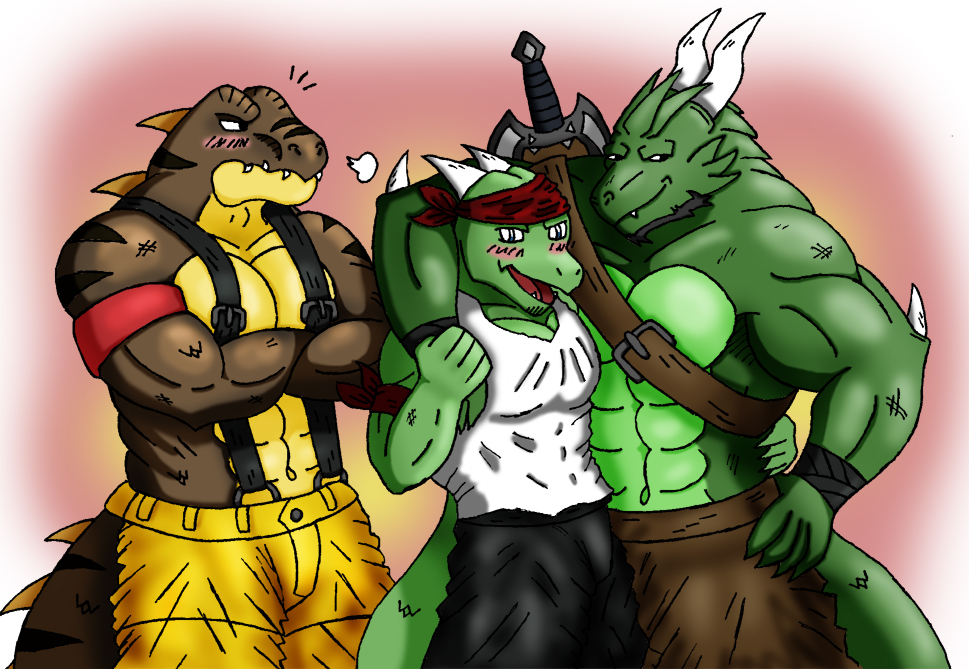 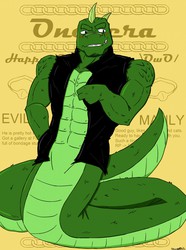 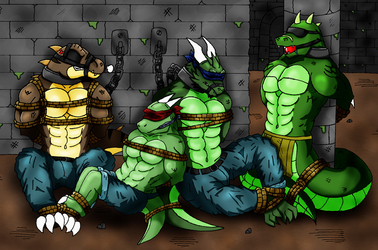 It’s been a (long) while, but i finally have a new picture to show you guys ^^! This is my first picture of 2014, and i want it be clean and more cute (more perverted images of guys tied up is coming soon x3).

Well, did you guys remember my original oc’s that doesn’t had a name? Well, now they have ^^! And I did this picture only for introduce them properly! The brown T-rex is Jason, the big and older green dragon is Dom and the yound dragon is Brian =D! I will make a profile for each one later on this site :3!

You can check his detailed profile (and as i am a guy that loves bondage, i could not resist to add a little bondage plot for them too x3) below. Here, you can also, if you want, make a question for my characters and they will answer it =D.

Name: Jason Brown (B) Rex
Age: 28 years old (if he was a human)
Profession: Fire-fighter
Description: Jason is the kind of guy who is always grumpy, hot-headed and likes to yelling at everyone, however, is a person of good heart, he just do not know how to express it properly. His hobbies mainly include repairing cars (he thinks that is relaxing), walk around the city in calm places (usually alone) and take long naps. Despite being known for his bad mood, Jason is not a violent man and also has a cute side: he secretly feeds a pair of abandoned kittens hungry that he encountered while was walking around the town. He believes that he would die of shame if the people discover it, and his attitude of "bad boy" was unmasked.
Bondage Plot: Jason is not sure why he likes bondage, he just likes it (though do not assume it publicly or to himself) but has not practiced as much and as he would like. Because of his attitude, many believe he prefers to be dominant, but secretly, not even admitting, prefers to be tied up. Even when he is the submissive, Jason can shout and order as if he were in charge, at least someone put a gag on his giant mouth.

Name: Dominik (Dom) Greenfield
Age: 32 years old (if he was a human)
Profession: General of the Army
Description: Dom is a loyal and brave warrior that serves and commands the main army of the kingdom Emerfall. He has participated in many important battles over the years, always coming out victorious, so it is very recognized and feared by neighboring kingdoms. Dom is a fighting machine, has a sharp intelligence, able to create almost foolproof strategies and has a good heart. He is always looking mainly the safety of their men at his command, treating everyone as equals. When is not fighting or training future warriors, Dom likes to read good books about history and philosophy. Currently is dating Brian, which was secretly in love since the first time he saw the young dragon that had joining his army. He is just very jealous regarding Brian and he threatens anyone who dares try to take your beloved dragon from him.
Bondage Plot: Normally, Dom never would let submit himself to anyone, he is a dominant by nature. However, Dom loves to spoil his little dragon, so, he lets his loved one tie him sometimes, and in fact, he secretly loves it when Brian is playing with him like that.

Name: Brian Underwood
Age: 24 (if he was a human)
Profession: Army Soldier
Description: Brian is a young dragon from Emerfall and serve the army of the kingdom since four years ago, their skills in combat are exceptional, although it is best to provide medical services to their companions. Brian is a friendly, smiling dragon and loves helping people. Because of his good heart that Dom started to fall in love for him. At the same time, Brian began secretly love Dom, watching the heroic exploits of the mighty dragon in battle. After two years of fighting together, Brian finally had the courage and decided to reveal his love for Dom and now the two are finally dating. He loves to spend much of his free time hanging out with Dom, when this is not possible, he likes to improve their medical skills, play with the children of the village or eat something (despite its size, Brian eats almost twice its weight in food).
Bondage Plot: Brian has always been passionate about bondage, so when he started dating Dom, could not resist tying his big dragon sometimes. Sometimes it can be very naughty when he is excited and has an extensive collection of toys to fulfill your ideas.