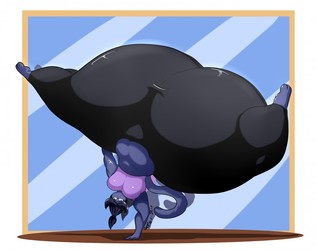 Jade Pennyworth Body Reference and Bio
Posted a few minutes ago
Name: Jade Pennyworth
Name: Jade Pennyworth
Species: Panther
Age: 18
Height: 5' 8"
Body shape: heavy pear shaped figure
Eye Color: Blue
Hairstyle: a long hairstyle with small curve end that reaches down below her shoulders (but mostly ties her hair into a single large ponytail)
Hair Color: Black
Favorite Food: cheese stuffed crust pizza
Favorite Drink: Dr.Cola
Marital status: Single and straight
Job/Career: Deciding of which College or University to attend to
A Little Tease About Her: Jade is one of the two neighborhood and oldest friends of Cody's, while the other is Belle Oliver. During her childhood she was the protected kid of the group (even to this day) as she prevents from anything that is dangerous to her and her friends or protecting Cody whenever Belle is teasing him. Jade have deep feelings for him however she didn't fully came to realize about it until she heard that Cody became Belle's prom date.

Hearing it had turned her world upside as most of time till after prom night she was inside her room debating about her feeling for her human friend. Once her heart and mind have finally admitted her feelings, she tries to discover how to win his heart. For being a high graded student, Jade had many different methods to do it but one thought have always come to her mind is to change her body appearance.

She have brought some pills that she have found from the internet that would speed up her growth hormones and instantly took one once they had arrived. At that moment it was one of her poorest decision making in her life as all the recent events have clouded her mind so much she didn’t realize if the pills were even working at all. Jade only notice her change if it weren't for her mother mentioning that her high school senior year was about to begin within a month away.

She went to see herself in her bathroom's mirror for the first time since Belle's prom night, and she noticed changes to her body mostly her lower half. Do to her lack of being outside during her summer, she been adding some weight around her stomach, her rear was becoming the perfect shape that she desire for, however her breasts have change a small amount. She brush off those disappoints as she believed her breasts are late bloomers and lose the belly fat during her gym training, but that will all soon change.

By the time Jade's senior year began her eating habits became more active as more food added into her plate or whenever she hangout with either Cody or her other friends it was mostly eating out at restaurants or fast foods. Eating all those foods have caught up with the panther girl as she could not be able to put on any of her recently new pants, and soon discover a dreadful realization. The pills that she have purchased during the summer had side effects, as it warns if consume greasy or fatty foods while taking these pills will increase her growth in alarming rate, the effects would last even longer, and the individual will become more hungry than usual. Jade had stop taking them and the growth rate was beginning to slow down however holidays were coming.

The amount foods and their aroma was too much for her as she consume throughout those holidays. Once Jade have came back to school from her winter break; the damage was already done as her body have taken it shape where we see her today. While she was growing, she became the center of attention that she doesn't really want and her lifestyle dramatically change as well. New pants she have to purchase every now and then, having to deal with certain group of people are either talking or looking at her rear making her feel very uncomfortable, and have to sit in the back in all of her classes since she wanted to avoid all eye gazing.

After all of the things that have been happening to her one thing remain the same, Cody was still with her. Throughout those months Cody have been helping her, he defended her when unwanted attention where eying her, he sits next her in their classes so she would not feel lonely, and whenever she needs to buy a new pair he use his jacket to cover the upper part of her rear if her current jeans could not fully cover. These little things that he did for her, after these years of knowing him, he try his best to make her happy and he continues to do that by asking her to their senior prom. That moment everything around her feels brighter and she felt there world is beginning turning to her favor. Soon after they have graduated Jade have asked Cody if he would like to continue schooling with her, however she have to wait for her answer as he have to go to a convention pretty soon. Since the convention was only for a couple of days, she gladly accepts and believes nothing could possibly go wrong...

I would to thank

for making this by commission. This is the second part of my OC Bio, and this time is my Peary Pantheress Jade Pennyworth (thanks Sats for coming up with the name :3). This have to be my longest bio story or maybe all of my stories so far. The reason why since I thought out her backstory long before her body was even created or thought of. If you guys are wondering how big Jade's rear is, she almost big as Camille's (Satsumalord's Chelsea's mother https://weasyl.com/~satsumalord/submissions/449013/to-question-chelsea-s-intentions ) and bigger than Sophia's. If the Artist's style make sure to follow him on any sites that he uploads his arts to, and maybe even support him on his Patreon account to get to see his arts first before anybody else.