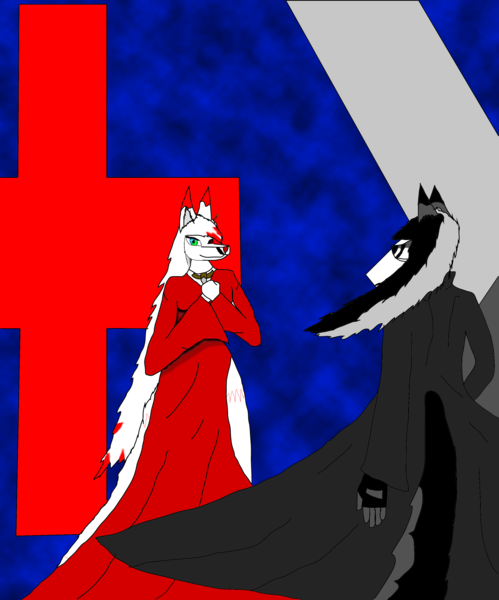 Lina tilted her head “w-what danger?” he voice went timid, worried. Omni frowned more “my father….Paden…is planning an invasion on all countries…one after another…going here first” his voice was mixed with sorrow and rage. Lina’s face went totally white, her eyes wide “h-how long do we have before he makes his move?” Omni looked at her, ears back “I don’t know….I had planned on getting aid for your country from Wuthra…but when I was ambushed I had to run here instead…my father wants it to be a surprise attack…so no one is prepared to retaliate.” Lina looked at her, her face in total shock “w…we need to talk with my mother the queen…she will know what to do about this” she whispered to herself but he could hear her “please…don’t let this be real” her voice had disbelief in it.

Omni went to her, his ears back and he stopped in front of her “you wanted to know…..so that’s all I know from what I’ve learned… now all is left is to prepare for it…”his voice was solemn and dark. Just that moment Wolfy came back in with a long black cloak that he wore and a dark red tank top and stopped, looking at Lina, ears back “w-what is it my lady?” he voice showed concern. Lina looked at her and took the clothes “we must speak with mother…this man has dreadful and important news…” she gently handed Omni the clothes Wolfy brought him, he took them gently “thank you” he spoke softly putting the thick tank top on looking at them “you Wolfy will know the situation in time…right now we must get to the queen…”he spoke with calmness that wasn’t shown a second ago.

Lina noded and slowly opened the door as he put the cloak and they moved out into the hall, following Lina and Wolfy close, his look was calm yet hiding fear and anxiety. Lina looked back at him and kept going thinking he was suffering “how long….have you been under Paden..?” she spoke softly, ears back. Wolfy looked back at him her eyes wide “y..you were under Paden’s domain?” Omni noded and spoke stopping them both “he raised me…I am 18…he taught me how to fight…but never shown much intrest in me…”

Lina looked down “I see…” they came to a stop to a large set of door richly carved from oak and lined with pieces of gold in a form of a Medicross. Omni looked at this with slight admiration, a smile on his face slightly forming. “I must speak with my mother before you are allowed to discuss your news…” Lina spoke and then turned to the door and opened it slowly, walking in with Wolfy in tow, leaving Omni alone in the hall as he waited for them, wondering what will happen now.

At that time, four people were walking down to the same door, but stopped when they saw him, a little on edge. “Who are you?” a female voice spoke behind him. Omni looked back and saw a Black Cat with pink stripes on her ears and near her tail with bright yellow eyes, next to her was a tall hybrid with massive bat wings with light blue fur and a top hat and deep red eyes. He looked beside them and with them was an Ice blue cat wearing a hood and jeans with white on her head and hair with deep blue eyes and a tall purple husky with blonde hair and green eyes with lip piercings under the chin, he wore a grey hoodie and jeans with a belt, on the belt dangled several thin throwing knives.

Omni stood fast, looking back at all of them, keeping a cool demeanor, calculating the odds of them being hostile at all, on edge. The big hybrid walked forward, his face looked like a fox’s, his red eyes staring at him “what’s your name? We asked you once already.” “My name is of no importance to you, I have business to attend to and unless you impede the progress I don’t consider it important for you to know me.” He spoke coolly, his glare fixed on the hybrid that only looked with curiosity at him. “Well we just want to know who we saved from the Arcadians that were attacking you.” they all started to head to the door, then he decided to speak “hold it…my name is Omni Torch…” they all stopped and looked back at him, surprised that he told them his name “nice to meet you Omni, I’m Shade” they hybrid spoke and pointed to the black cat “this is my girlfriend Shadow and these are our friends Akari” he pointed to the Ice blue cat and then to the purple husky “and this is Ryuu.”

Omni nodded to each and then spoke in a sheepish, embarrassed manner “t-thanks for saving my ass… I wouldn’t have made it this far if you didn’t do that.” All of them just smiled and nodded at him and then they went into the room were Lina and Wolfy vanished to earlier, we’re they also generals?

It was twenty minutes later when Wolfy came out and told him in a stately voice “you may now enter but are required to keep a respectable distance from the throne.” She stood to one side and Omni quickly walked in his eyes squinted, blinded by glaring light….

ANNNNNNNNYWAAAAAY i introduced more of the pack, Shade Akari Ryuu and Shadow. "WHOS NEXT?!" you my ask and i'll tell you "so damn many"