Hey there, I'm Omi! I'm a red panda from So Cal who loves being extremely social and fursuiting! I sometimes attend furmeets in the local area. I own two fursuits, those being myself Omi the red panda, and Brandon the purple Malamute.

Here you'll find a mix of photos of myself and friends, stuff I've drawn, and the commissions/gifts I receive.

★ Omi-Bou the caribou (a side character) ★

★ Brandon the Malamute (my male character) ★

~★~ I have so many AMAZING friends with this fandom! Some are local, and some are far away. They should know that I love them all <3 ~★~

I have a wishlist on Amazon under: pretty.omi@gmail.com 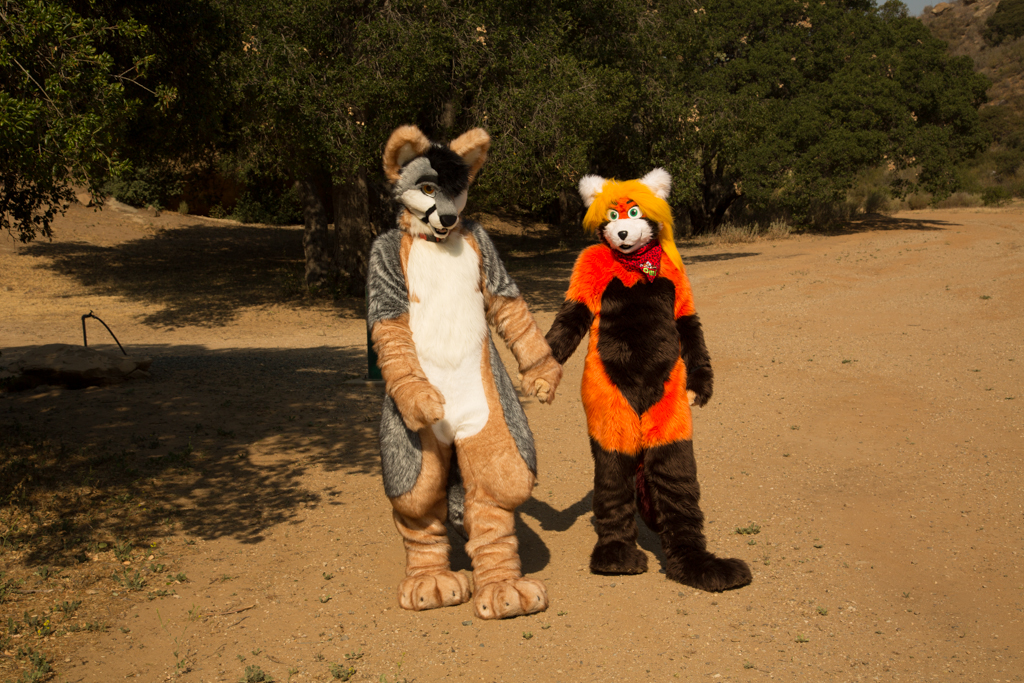 The Prancing Skiltaire vs In N Out Burger

The Prancing Skiltaire (aka “The PS”) is a monthly gathering of furries in Southern California. This meet has been going on at the home of Mark Merlino since mid-end of 2005. I began attending this meet up in late 2006.

Back then, small groups of us would walk down the street to the local In N Out burger to grab food. The PS probably had maybe 100 people on a busy night at this time. I continued to attend the PS for many years, and every year the meets have gotten bigger and bigger. People started getting fursuits, at first we’d maybe have 5 fursuits on a good night, that number as well started to grow as fursuits became easier to obtain, and people began making their own. Soon, it became a part of the evening for everyone who had one, to get into fursuit and go on a walk to In N Out, with everyone in tow. We’d all go hang out, and grab dinner.

I don’t attend the PS nearly as often anymore, but I did happen to attend this last Saturday night, July 12th. There had to be 200 people, easily. The main street and adjacent streets were full of cars and parking was hard to find, the front yard was packed, the house was crowded. I met up with a couple of old time friends, and eventually we did as you do, and we headed to In N Out.
When we get there, the manager and a guy from corporate headquarters are there, informing people that this is the last night they'll be allowed to come to In N Out for their gathering.

To be completely honest, I believe this has been a long time coming.

There has property damage done to their outdoor seating area, as a result of the continued strain we pose to the area each month. The grass has been completely dead for a couple of years, reduced to bare dirt. The bricks in their walls are crumbling, some with exposed rebar from having people sit and climb on them. The wrought iron fence around the perimeter is loose all over from people climbing on it, standing on it, hanging on it and what have you. There is always a TON of trash, to where the trash cans are overflowing and the employees can't even get to the trashcans to empty them.

There is also the constantly growing issue of people overflowing the area, blocking the drive thru, and blocking spaces in the parking lot. A few years ago, people used to bring their cars over, and pump music from their stereos until that became a problem and it eventually had to stop. Some people may not realize it, but they also borderline harass the other normal patrons of the restaurant. On several occasions I’ve seen furs constantly attempt to gain attention from the normal patrons, beyond the obvious clues that these people want nothing to do with them.

Another problem is, a lot of people who come to In N Out are actually loitering. I don’t know the real numbers, so I will just simply state that it’s obvious not everyone who is there has ordered food. And even for those that do, the meetup continues on well beyond the time of the majority of people eating their food. I will admit guilt to this even myself, as not every night would I order something.

Right away, many people started to complain about this being an issue of discrimination, “just because we’re furries”. People said they were going to boycott all In N Outs, they said they wanted to create a storm on social media, someone threw out the word “discrimination lawsuit” and some people even talked about calling the local news and trying to get a story done on how furries are being discriminated. I’m here to tell you this has absolutely nothing to do with being a furry. This everything to do with all of the reasons I’ve listed above, and this particular establishment simply not being able to handle it anymore.

If you want to boycott In N Out, then go right ahead. If you want to say “They’re just being a bunch of dicks/mean/discriminating against me!” then you’re wrong. If you say “They’ll be sorry! They’ll lose so much business because of us!” Honestly, not very likely. It’s an In N Out. Have you seen how busy any In N Out is on any given Saturday night? And also, don’t you think they’ve considered that and weighed it against the problems the group has caused?

I personally noticed in more recent years the annoyed attitudes of the employees whenever the group is there. So again, no one should really be oh so surprised by this. According to the man from corporate, they are actually getting a renovation of their outdoor seating area, and are thus banning large groups entirely, which extends to car enthusiasts meets and similar.

Again, if you want to boycott In N Out, then you’re more than welcome to, Just please do it the right way. Eat a late lunch before you arrive, make plans to eat after the meet, bring your own food/snacks, or even contribute to the potluck. Write well written, polite letters to In N Out if you’d like to, explaining your disappointment that we can’t meet there anymore. If you want to continue to eat there, my advice would be to walk there, without any badges, tails, etc, order your cheeseburger, and take it back to the house, or elsewhere.

Don’t go calling the news, or making a bigger stir of this than it needs to be. If you call the news, and cry discrimination, and someone from In N Out goes on to say that’s simply not allowing large groups, and were to cite the damages caused to their patio, that would put a bad image of furries in the media, and we don’t need that kind of press.
Honestly, this is just another in the list of restaurants in the local area that has asked this group to no longer give them their business (Artist Crawfish Express, and Denny’s are the two I know of). As long as we allow other people within the group to display improper behavior to the local restaurants in the area, then the list is going to continue to grow.

TL;DR Local area In N Out has banned large groups, including furries because the group has gotten too large, and caused damage. This shouldn't be a surprise. Don't be dicks to the restaurant.