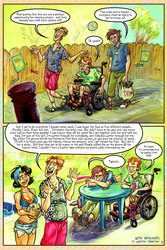 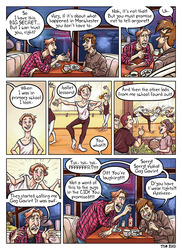 It's time for ocpartytime and Cop Story folks are going to a pool party! Hopefully I'll draw more pictures like these before summer is over.

You might remember Troy and if you do you know he's always up for fun even if his ideas of what to do with water balloons might be not very conventional. Obviously Murray had to take him to the party because she knew he'd like it. And if you're wondering how Murray manages with a whole crowd of people needing supervision the person behind Troy is Jazz - an orderly at the hospital Murray works in. He is good at his job but completely indifferent to it in a "nothing personal just business" kind of way. So this is far from his idea of a perfect weekend but he's okay with doing Murray a favour in exchange for free food, (non-alcoholic) drinks and tweaking his shift schedule.

Which means Quinton is also here. He was actually insisting that this kind of party requires him being completely naked and when Murray and Jazz refused to assist with that he said that it was the deal-breaker and he wouldn't go otherwise (and nobody listened). He's still having fun sipping whiskey and being sarcastic but he won't admit it, especially not to Murray.

And then there's Dylan and Raymond (who is relatively new as far as Cop Story goes) - they both have epilepsy and since Murray and Jazz have their hands full and can't watch everyone all the time they decided a paddling pool would be safer than the real pool. Dylan and Ray are unimpressed with the paddling pool, Murray's decisions, Quinton and the party in general.