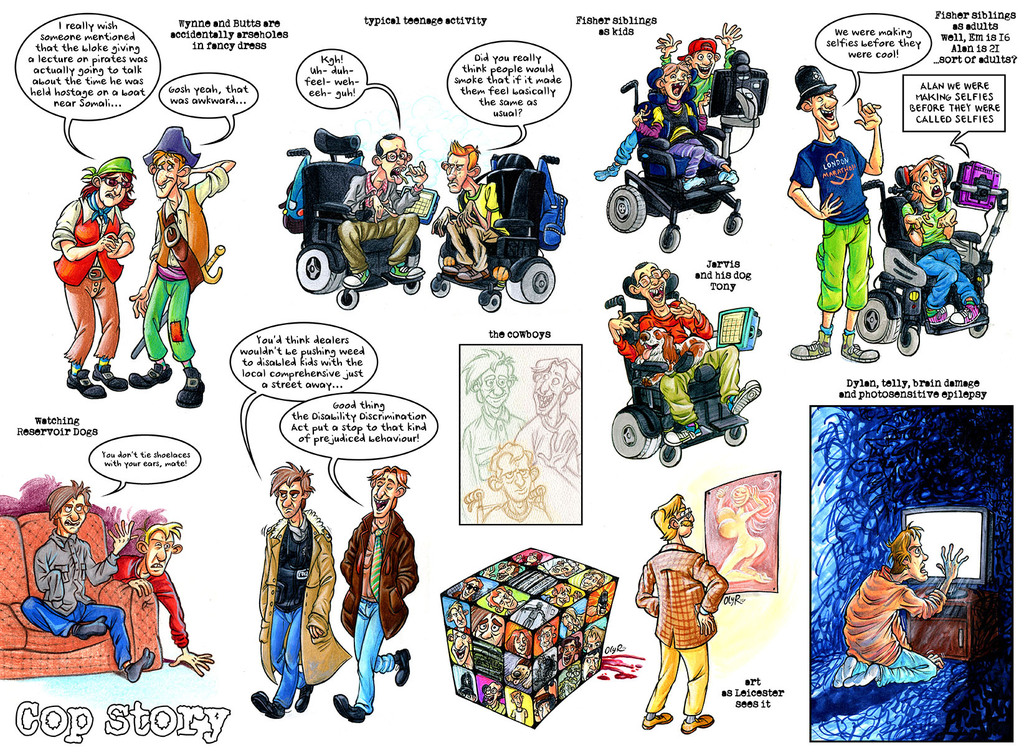 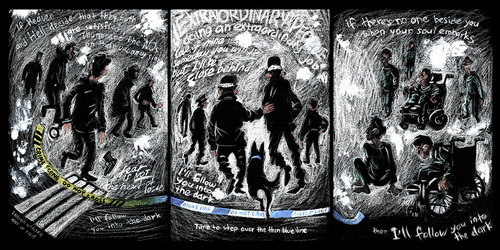 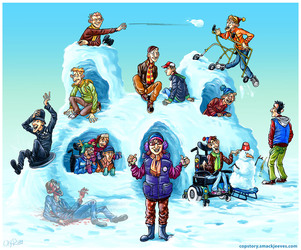 I somehow went from barely drawing random pictures to drawing a lot of them... I blame my new sketchbook! Again, most of these were posted on tumblr before. And half of them were prompted by memes so you can go leave some numbers in my askbox!

I swear, it's like even when my characters are not actively trying to act like jerks they still succeed at it (looking at you, Wynne and Butts).

The doodle under Wynne and Butts is something I drew about a year ago but I didn't post it then because at the time Chance's hand was still a spoiler and I forgot to post it later but I still like it so... If you've seen Reservoir Dogs you'll probably say that Chance doesn't have enough empathy, if you haven't seen Reservoir Dogs you should watch it! I make too many jokes about that entirely non-funny film, I guess it's my way of coping.

There is actually going to be a story (a Cop Story story) about drug prevention in the school Teague, Jarvis and the rest of the meddling kids go to. You'd think these kids get enough drugs prescribed to not want to buy them from shady people in alleyways.

The cowboys sketch was done on this really thick watercolour kind of paper but I keep forgetting to colour it. "Cowboys" is the almost official nickname for Chance, Gavin and Llane both because of their heroic approach to policing and because in British English a cowboy is "someone who is not honest, careful, or skilful in their trade or business, or someone who ignores rules that most people obey and is therefore not considered to be responsible."

Rubik's cube is slowly becoming a semi-official Cop Story symbol. When I get to the next part of the main storyline you'll see why.

I decided to draw Alan and Em as kids and looked up when it was possible to get an eye-controlled computer. Actually, one of my pet peeves is people assuming that every medical/scientific technology immediately becomes accessible to ordinary people - no, that amazing prosthetic you just read about in Scientific American is not something every amputee will get for free within a year. But it turned out eye-tracking still was around earlier than I estimated - the research was being done for about 50 years, most companies producing computers like that were founded around the 90s and most mentions about people getting an eye-controlled computer for the first time seemed to be roughly in 2005. I sort of regretted that you couldn't make a joke about selfies back in those times but then I realised that people were making selfies long before they were called that and did it anyway because no kid is going to pass an opportunity to make faces at a camera. Also Emma regrets that no matter how well text-to-speech simulators get developed they are never going to sound as sarcastic as she means to.

Jarvis likes all animals in general but if he had to choose he would choose dogs. And if he had to choose between all the dogs he would choose his dog Tony (everyone who figures out why Tony is called that gets an imaginary cookie). Tony is a cocker spaniel, he is quite old, remarkably docile even for a breed regarded a great family pet and is Jarvis’s benchmark for all dogs. Toby always allows Jarvis to do anything and Jarvis is convinced that all dogs are like that - which means that even if you have most aggressive ex-dogfighting dog growling and pulling the leash Jarvis will try to get as close to it as possible and pet it, which with his motor skills is more like smacking. Jarvis has never been bitten yet but something tells me it won’t last long…

Leicester's opinion on what art should be was actually a doodle for my online class but nobody there got the meaning - art representing only particular groups of people and only the the way the majority of audience wants to see them. But then I was listening to this song (which is so relevant to Cop Story) and there was a line "pictures of naked young women are fun"- well, somebody gets it...

And Dylan is not allowed to watch telly much (because he gets seizures often and some of them are clearly photosensitive). Which means that one of Dylan’s greatest ambitions in life is, whenever he is left without supervision, to get as close to a tv as possible and to watch it for as long as possible. This doesn’t happen often but when it happens it always ends the same and never ends well and Dylan still hasn’t learned this lesson. He doesn’t understand why he’s not allowed to watch telly and is annoyed by people not letting him do it so he can’t get enough of it.