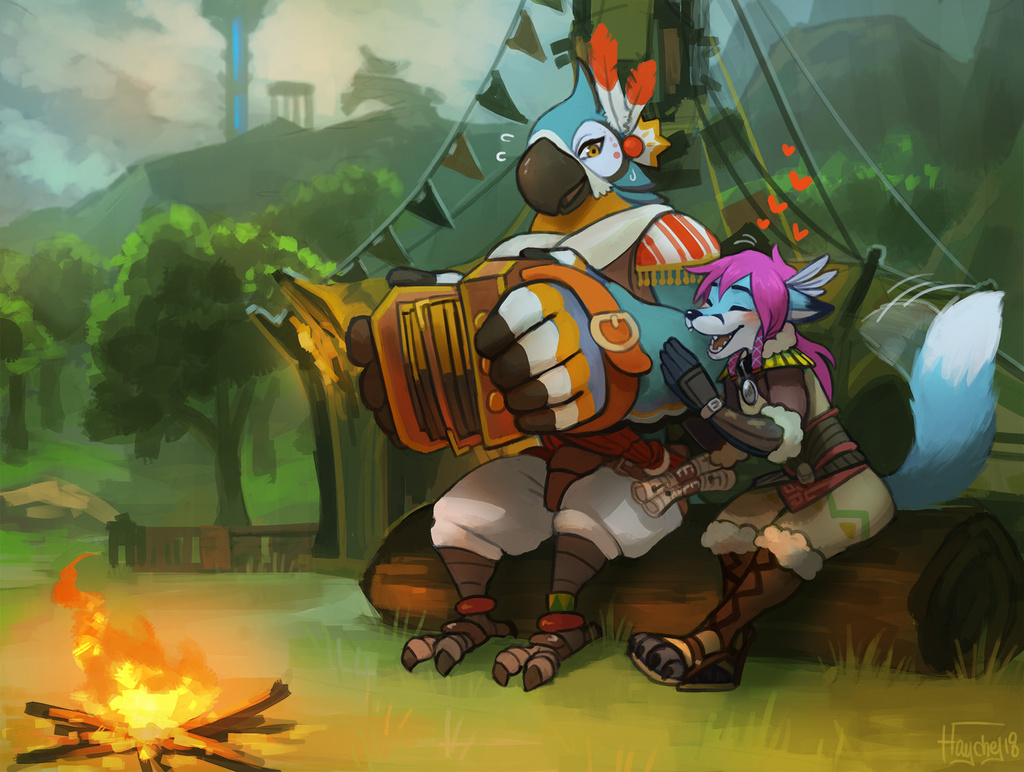 On a tree trunk, by a campfire, a blue bird sat and played his accordion with passion.
He had to be one of those Rito, of which the young fox has only heard so far in stories, he had never seen one himself.
Nyaaa was immediately thrilled by the shiny feathers and the lovely gaze of the stranger. He listened to the music and sat down next to the much bigger bird.

The stranger greeted him with a friendly nod, but did not interrupt his music-making.
When the song was over, he lowered his instrument to his lap and greeted the fox. "Hi I'm Kaas, you seem to like my music"
Nyaaa, who was completely absorbed by the stranger, just nodded in agreement and let his curious gaze wander over the Bird.
"Your sweet music has lured me out of the woods to you" giggles the blue fox. "You play really well" he added and moved a little closer to Kass. "Would you play another song for me," he asked.

Kass turned a little red and nodded, took his accordion and played another song. Nyaaa snuggled to the bird's side, listened to the song and looked at him in love. Kass was visibly flattered by his new admirer and played many more songs for his new friend.

The fox loaded his new swarm onto a hot mead and both talked late into the night. When Nyaaa fell asleep snuggled up to Kass, the bird carried him to bed and snuggled up to him.

The next morning Kass suggested to the fox to accompany him to his home village and Nyaaa agreed. Both made their way to the village of the Rito and Nyaaa was curious what would await him there...

To be continued Next >>

Some of you may have noticed, but I'm slightly in love with Kass from The Legend of Zelda Breath of the Wild. I rly like this fluffy huge bird <3 I could sit next to him forever and listen to his beautiful songs. I guess its time to follow him and visit his hometown ;3