Did you see it? by northseafairy 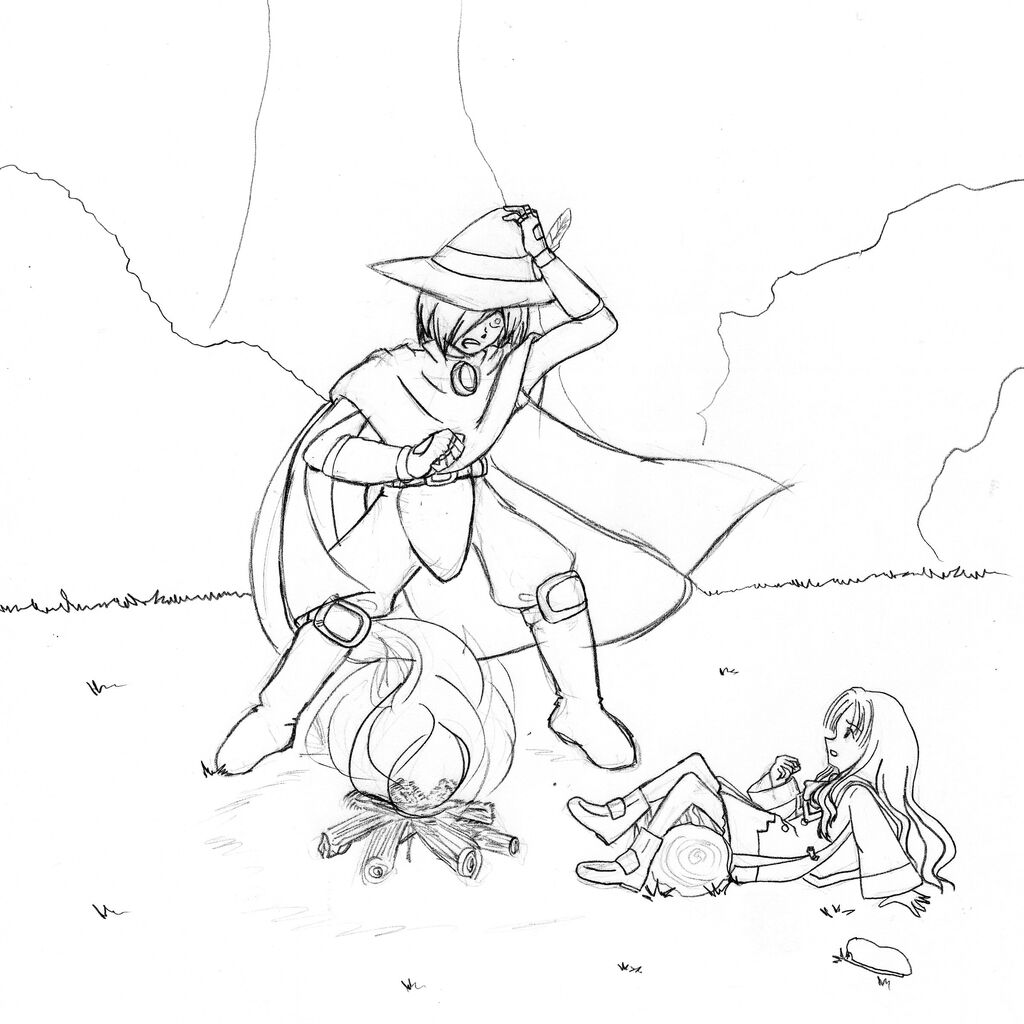 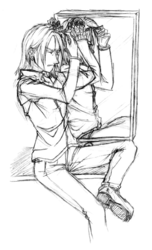 Did you see it?

I can't believe I never uploaded it here. I'm keeping the original description intact, for nostalgia and context:

I'm trying to figure out a way to color this nicely. I want it to look good.

So I roleplay at this place called The Ineffable Game. It's basically a dreamworld, where the gods decided to find out who would ultimately win in the long run. Good or evil? Oh, and there's some neutrality thrown in the balance too, but really they're just to keep the others in check. Anyways, the idea is that you can take someone from any story/anime/show/book/original, and place them in this dream. It is after all the whim of a god. Your character is aligned to the god that brought them there, and from that each person's adventure begins.

Asmaria is new to the game. She has wondered around for a while trying to figure out what she ought to do, when she stumbled into Hamel on the streets. In Hamel 's usual way, he was not pleased. Nope!! Asmaria got a cleaning bill she couldn't possibly afford! ToT To make a long story short though, he 'put it on her tab', and, taking a small curiosity in the girl because she wore a cross too, decided to keep her around because she reminded him of Flute. (Who by the way is not in the game. I probably will play her later though, when I finish the manga!)

So it comes to a day later and they are sitting around the campfire. Asmaria is attempting to cook dinner(something she's never done before) because Hamel's a jerk like that and the lazy bastard can't cook his own meals. XD This is the scene that took place, because we wanted to move things along instead of letting the 'mystery of the hat' go on untouched. (In case you didn't know, Hamel has a horn under his hat. He hates this, and it is his character flaw. He does not want people to know. Bad things happen if you touch his hat. )

P.S. Concerto is the bunny that Hamel wanted to cook, he called him 'pork chop'! But Asmaria looked horrified at that, so he let her keep it as a pet. The name Concerto was also Hamel's idea.

Hamel eyed her distastfully. "I've seen worse but your in safe hands. Its me you should worry about. " He eyed her cross and was reminded of Flute's. This was probably the sole reason he chose to torment this girl further. "We aren't to far from town but I don't plan on going to sleep tonight." He looked up to where the sun was, it was almost nightfall. The wind picked up and Hamel felt his hat almost blow off,catching it just in time as he met eyes with the girl. "I left some wood near here so you just worry about dinner now, slave." He cackled as he walked toward where he left the firewood days before.

Him she should worry about? Well certainly if he keeps calling her slave. Asmaria fights back an eyetwitch forming. It's almost like Rosette kind of how he gets when he orders her around. But a lot more... posessive? Or something like that. At the gust of wind, Asmaria has to steady her own hat too, opting to just take it off and set it next to Concherto's cage instead. So... cooking. Not something she's done before, but it can't be too hard, right? As long as it's not burnt and not raw, anything edible will make the hungry girl feel better, and she can imagine that's how Hamel feels too. So she'll go along with it.

Hamel smiled pleasantly as he saw her begin to cook. Without warning, another gust of wind took Hamel by surprise. His eyes widened as he saw the hat he guarded float down beside him, dumbstruck by the sight of it. He then looked back to the girl with absolute horror. She couldn't know. She would be afraid of him. She couldn't know. "Did you see?" The only words that could come to his tounge. Of course she saw, it was right there in his blonde mane. "Did you see..?" He looked back at her with wide crimson eyes. She did didn't she?

Asmaria was simply trying to figure out what exactly to put into the stew without making it taste awful. She really just had what Hamel brought her, so it shouldn't be that tricky, right? It's then that she looks up to ask if she's doing it ok, thinking it almost akin to a cooking lesson or something, when the wind blows his hat off. Well of course she sees his horn there. But it's not so much a look of fear in the girl's face as it is surprise. Ok, and maybe a little recognition. Chrno didn't have horns, but many of the others they faced did. So she certainly knows what a horn on a person means.

"Ah..." A small nod is all he gets for the moment, because now she's more focused on why he's reacting so badly to it. Why did he want to hide it so badly? If Hamel is afraid she may fear him, it would be more for how he behaves than for how he looks. Of course it -does- cross her mind that she could be falling right back into the same situation that she was in before she met Rosette, but she tries not to believe that could happen here.

Hamel almost leaps at Asmaria with a distraught expression. "Did you see it?" For the first time, Hamel looks very afraid. She saw it. He turned away and placed the hat on his head. "You can run away. I'm a very dangerous thing. The heir to the Demon King. In short, I'm the thing you should be afraid of out here." The fear on his face disappears only slightly as he stares at his hand. He needed to keep his cool, otherwise this girl could be a victim. Without Flute here to stop him, that would be very bad for Golden Hall. "You want to run away? You can before I hurt you." He smiles darkly. "And I'll hurt you very bad. I'm not human. Not to be trusted."

Asmaria falls back a bit as Hamel nearly jumps forward in his panic. This is really weird. He never acted like this before, and all this over... over his horn? She nods again, looking worried but not moving. "I saw it, but..." But it's wierd. All of the other demons that she knew of were overcofident, or commanding, or at the very least, didn't get scared because a twelve year old girl figured out who they were. He certainly has been a jerk recently, but not of the life-threatening sort. More like the life-servitude kind. Asmaria looks at him like she's trying to figure out what to say, because she's never had this option before. "Then... then why would you tell me I can run away?" Should she listen? Why does he look so scared? Badguys don't do that.

"Because I want to give you a head start." The violinist does his best to look threatening but the fear is still in his eyes. He touched the hat and sat down against a rock. "I'm the sort that destorys towns for the fun of it." He wasn't serious at all, it was apparent in his voice. "It's okay to be afraid. Not like you're the first." He stares at her cross and can't help but laugh. "You're torturing me this far away Flute. You care this much?" He looks at the girl's face and just laughs. He was too scared to stop laughing. This wasn't the thing he wanted anyone to know but there it was. "Aren't you afraid of your captor? The Demon?"

For some reason Asmaria can tell something's not quite right. But since this is the first demon not from her world that she's ever met, she's really not sure exactly what to make of it. Just that he's unnerving her a bit with how he's acting. "Wha... Who is Flute?" Asmaria's worried expression changes a bit when he starts laughing. It just shows confusion now. You sure you're ok? "Well you haven't hurt me yet, right? It's not like you're the first one I've met..." It's true. Though Chrno is certainly better company. "I-in fact, I know a nun that's scarier than you!" Asmaria's not the best at throwing comebacks, but she's a little unnerved by the way Hamel is acting, it doesn't seem sincere. Plus the fact that she's been treated like his property up til now only to have him spaz on her and start laughing all over seeing his horn. Besides, thinking of her friends makes her feel at least a little braver.

Hamel stopped laughing and shook his head. "Why don't we call it a night and we cook tomorrow." His voice was still alittle shaken but regaining composure as he continued. "You're stuck with me now so get used to it. You and your little Concerto." He reclined against the rock after setting his Violin to the side of him. "You are the second person to not mind this horn. Everyone else is scared of me because of it. " He adjusted the hat over his eyes and promptly stated. "Youre sticking around because you still owe me. Don't think I'm letting you go. Not when you're the only person who will stick around."

What...? That was it? Asmaria blinks as he calms down, putting off the cooking for now. Well... if he lost his appetite. "..." He's still not going to let her go then? And really? Is she truely the only other person to not run off scared of it? Maybe... maybe he was a bit like Chrno, at least in that he was misunderstood. In most people's minds demon equals bad. But Asmaria's already had proof that is not always the case. She doesn't really respond because she's not sure what to say. So instead she makes herself a spot in the grass next to Concerto and simply whispers, "Oyasumi nasai," with a glance to the violinist, before staring up at the sky until she falls asleep.

Asmaria is from Chrno Crusade, and Hamel is from Violinist of Hameln