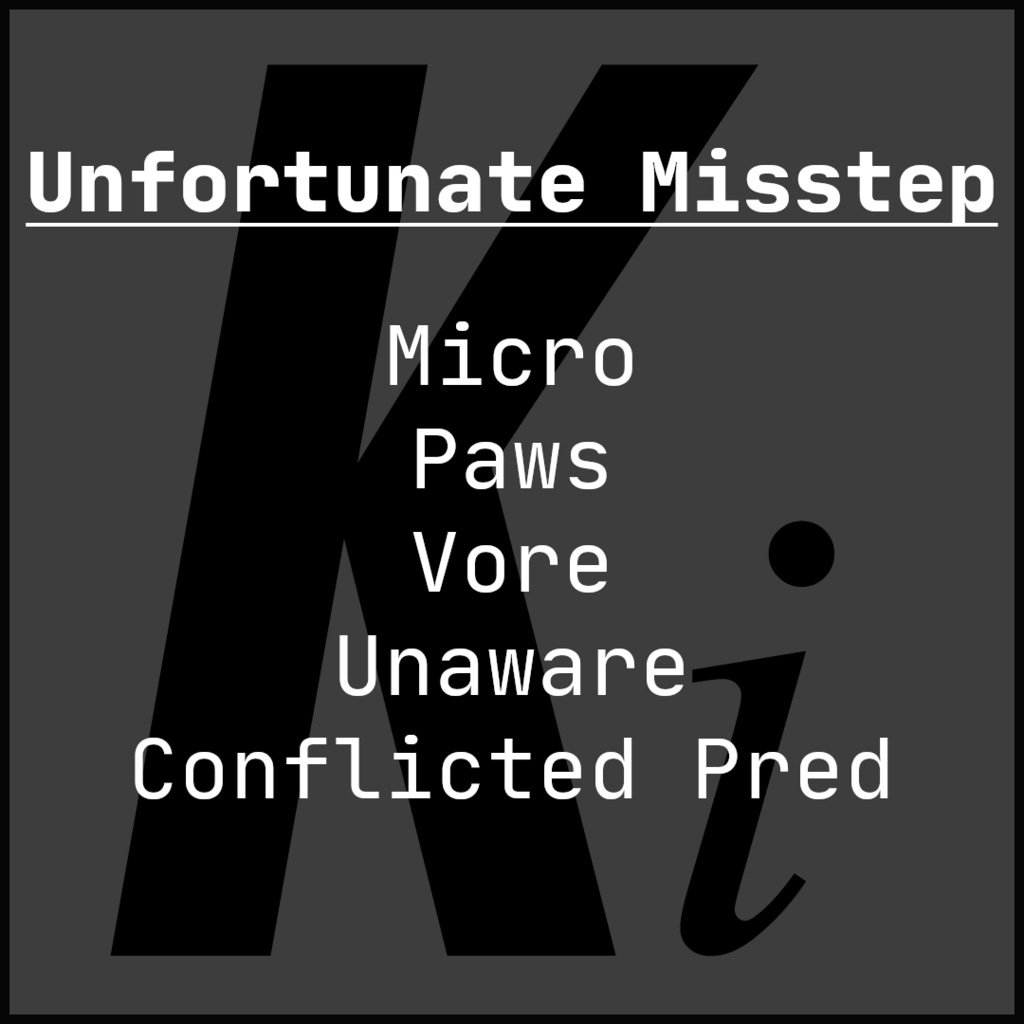 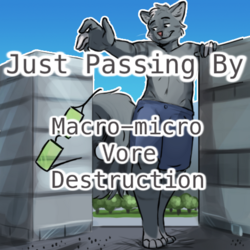 When Roy needs a device repaired, he carelessly settles into a shop waiting for its owner, who might not get back to work anytime soon.

Commission for Squeaks as a gift for Roy aka Dracodare

"Ugh, where is that dang shop."
Roy grumbled, chameleon eyes darting left and right trying to spot the ensign he's looking for as he walks down the street. He wasn't too used to this city's layout, after only a day or two of exploration to map everything in his mind. He had been browsing the shopping district for a good hour by now, legs getting the sorer with every added step, being close to abandon when something caught his gaze.

"There it is!"
His eyes shining with eagerness at the mundane wooden sign dangling from rusty chains. A rather antique look contrasting to what was advertised, depicting the outline of some sort of modern science widget backed with a potion, the paint withered enough it's hard to tell the colors that were supposed to fill the pictures.

Roy glanced through the dusty glass at the various items on display. He couldn't guess what any of them was supposed to do to save his life, he'd much rather focus on his area of expertise, but a mage still needs some baubles now and then, and light is much easier to get from a science-y device than by wasting mana.

Alas, the lamp he had bought from his friend too long ago to remember had finally failed. It still was impressive that it was able to last years without maintenance, but the chameleon figured it was time to see his friend to buy a new one and maybe get a better device to enlighten his spell research.

Taking a deep breath, Roy pushed the old door of the shop, the eerie creak of the wood broke the silence within the room he stepped in. The chameleon glanced around, the counter, more of a desk pushed against the wall, was unattended, merely left with a seemingly damaged device sparking a warning not to touch it.

Thinking to himself the owner must have gone to the back to search for parts, Roy took the liberty to get closer, pulling the chair back to sit down and take a distant glance at the fizzling tech, taping his feet idly against the floorboards while he satisfied his curiosity.

His attention was caught by the creak of the front door, jumping out the chair he turned around in a panic, staring at a tall Catfolk that walked towards him.

"Ah hello, I wanted to know what sorts of energy sources you had on sale", the feline inquired.
Confused, Roy looked back at the desk, the realization suddenly dawning on him.

"O-oh I'm not the shop owner I'm just waiting for them to be back!" he stuttered, giving a nervous grin to the tall figure standing right before him.

Tilting his head, the Catfolk raised an eyebrow, "Right.", the word resonated uncomfortably, "I don't suppose you know when the owner will be back?"

The chameleon choked on his words, taking a deep breath to reply.
"I... Well n-no..." he muttered, twisting his foot on the dusty wooden floor, "I was already alone when I got here, but I'm sure they wouldn't leave for long with the door unlocked!"

His words seemed to go over the fellow patron's head, the feline rolling his eyes before turning around to get back out the door.
"Waste of time, I'll come back later.", the words appeasing Roy as the door slammed shut.

Alone once more, the anxiety of being thought of as the owner or worse, a thief made him nauseous, but the hours of walk countered with a growl of his stomach, having not eaten for too long. Pondering a plan for what to do if the owner did not show up, he decided to avoid the main desk, taking the liberty to turn the small sign hanging against the glass of the door around to have the "closed" side facing out, hoping this would be enough to keep people from trying to enter, though it seemed like a light measure.

He stood there, pondering ways to keep himself safe, staring up and down he soon noticed the lock down at the bottom of the frame, he flicked it down with a toe to make sure of it.

A deep sigh of relief escaped him, turning back around to the shop's wonders, his eyes soon locked on a bench tucked in the opposite side of the room, set back in a little recess, hidden away from the outside world so nobody could see him.

Sitting down he tucked one leg over the other, taking a little time to breath away the anxiety, a guttural gurgle forcing an empty belch out his jaws, looking into his bag to get a snack only to find the remains of a piece of bread forgotten in. Grumbling, he took the stale chunk out and threw it across the room.

Trying to push the negativity down he waved his foot in the air and breathed deeply again to relax, a frown slowly forming on his face as getting calmer let him realize there was an itch persisting on his sole since he got up, a rather uncommon feeling when his scales usually made it hard to feel much, a great thing when traveling barefoot, but all the more aggravating when something did make it through.

Groaning, he opened his eyes and pulled his footpaw up, staring over his sole to find the source of the discomfort, ruling out heel arch and toes, focusing, pinning down the feeling to the ball of his foot, he squinted and looked closer, besides dust from the shop, the green scales of his sole had a single, peculiar looking bit of dirt. Seeing it squirm giving him the frightening realization that this was not just any dirt, getting repulsed at the thought that he stepped on a bug and would need to clean up the mess at first.

Ready to flick it off, he paused his fingers inches away from the little form, it was rather unsettling, looking more... Humanoid, with a tail weakly trembling between the legs.

The chameleon glanced back up at the desk, a well-timed spark of the broken device on it letting the reality of the situation dawn on him, a snort escaping him.

He inspected what he assumed to be the owner closely, the short fur, skin covered tail and long, cone-like snout hinting to a Ratfolk, not uncommon to find owning such places. More uncommon was the fact it was smaller than the claws on his fingers, trying to size up the minuscule being stuck deeply on his sole.

Flexing his toes, a tiny, barely audible set of squeaks hit his ears, almost drowned by outside noise, the crumb imbedded into the slight squishiness of his scaled sole seeming to squirm and cause further tickles, causing the digits to curl back and almost absorb the tiny thing into the sea of green.

"Well, that's a messy situation, this is why I don't mess with that science stuff... Too dangerous." he teased, curling his toes to shift his catch. Shrinking was not unheard of, but it was rare to find a shrunken person, at least, a live one, usually footwear made it hard to feel them before it was too late.

Only able to hear some squeaking as a response, he wondered to himself what to do, since he didn't know of any spell that could get them back up to size, his belly called once more, the bug-like size of his captor pushing on his instincts with the help of hunger.

Before he could shake it off, he found himself tasting dirt, blinking at the sight of his tongue plastered where the shrunken form of the rat was stuck just before, and flicking the wet muscle back, the hit area on the green sole was now clean and wet, the peculiar taste of fluff and skin teasing his tongue.

Roy froze, a shiver running down his spine as he leaned forward past the wall to the store front, swallowing nervously at the thought someone might break in and find him "torturing" the shop keeper.

A belch quickly escaped him, pulling his attention back, he froze in place for a moment, hand over his stomach. Had he really just swallowed someone whole and alive?

The loud gurgle of his stomach seemed to confirm it, clutching his hand on his shirt he fell back against the bench, quickly thinking about what a quake that must have felt like for the Ratfolk inside, making him try to remain still, staring in disbelief, lifting up his shirt to feel over the smooth scales.

It was impossible to tell what he just did, soothing his worries of being found out, leaving him with only one more thing to ponder. His heart pounded as he thought of what to do, if he should, or could get the rat out, if he would be able to reason with them after the fact, though shame was pushing a more important fact to his mind.

He didn't want to be seen trying to puke, dirty as they may be the glass of the store windows remained clear enough to see through, his eyes darted from wall to wall, standing up to get to the center of the room, there was no door to any back room, everything in the store was right there, shelves of storage covering the walls.

The recess part of the room with the bench could have been enough to stand in if the bench wasn’t there but trying to pull the sit away as far the wall as possible quickly showed it was fixed to the ground, meaning that he would still stand in sight if he was to get the flea-man out.

Out of options, pressed by time and anxious someone knowing the store owner might try and get in, he took awkward steps to the front door, toes flicking the lock back up, and pulling the handle, the creaking seeming so loud now, worried to get attention over himself. Stepping out he darted to the town gates, hoping to find a more private place to make his mind, hopefully before his body made the final choice.