Just passing by by Nomaxice 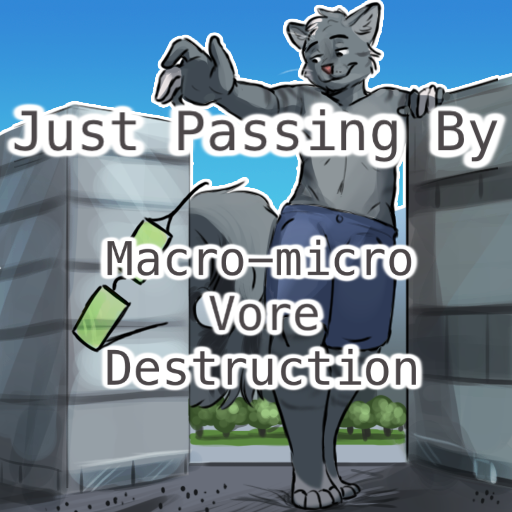 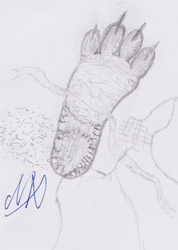 So this is the first commission I wrote, wooo.
Short, likely imperfect, but it's a start, and I will try and open for folks who might want to get something.

We start this off with Dracodare who asked for a boring office day... That turned less boring~

The screeching beep of the computer was irritating even to the seemingly missing ears of Roy. The chameleon sighed, staring at the error box appearing on screen. He couldn’t make sense of it, “Error trying to read from 0xFFFFFF”, might as well say “A fairy farted in the quantum supremator”, as the IT department was rarely explaining to what they see as a computer illiterate what all the technical jumbo means.

Glancing down at his phone, he dreaded making the call to the hotline for his company, but alas, he had to get this report done and sent by the end of his shift. Pressing the shortcut on his home screen to call a more trusted IT, his boyfriend Noma, he glanced over to the open space, busy with various electronic noises and muted voices, his coworkers that seemed just as lively as a bunch of bureaucratic zombies. The phone beeping softly in his ear was teeth grinding, the automated, robotic voice of the voicemail made him despair, before one last, heartbreaking beep to signal the system being ready to record his plead to be saved from whatever god cursed him with this.

Roy simply groaned into the microphone, wishing out loud something would just com and end this painful day, hanging up and letting his head slam onto the keyboard, which caused more beeping to grind his ears. At least, that was the case for a few seconds. A deep, distant rumble made him raise his head, just on cue to the power in the building going out.

Salvation from the beeping purgatory, he thought, thunder must have hit a transformer. Thunder, however, would mean there was a storm, looking outside the glass making up the wall of the office building, he could see that it was a bright, sunny day, warm too, the kind of day you really want to spend outside to bath in the sun and warmth, especially when you’re a reptile.

The chameleon’s thoughts were cut short as the rumble happened again, louder, this time, shaking his whole desk. Roy blinked, standing up slowly, as were his colleagues. His hand vibrated, ringing in a peculiar way, lifting up his phone to see a message on scree from the EAS, warning to evacuate the city immediately. Roy’s heart raced, seeing another message, a few hours older this one, on his online messaging app, the preview cut off, but it was enough for him to connect the dots.

The sender field displayed a green heart next to “Noma”, the preview was the lynxcoon saying he’d go through town since it was safe to do so… The chameleon’s hand clung tighter to the device, as his specie tends to do, he forgot to tell Noma work had called him in on his day off. Roy frantically tried to call Noma, but alas, signal was dead just like power, too focused on the screen the chameleon didn’t even notice the screams from his coworkers suddenly getting up and rushing for the elevator.

His heart skipped a beat, a sudden crash darting his view up to the windows before him watching a white furred hand as wide as a truck is long casually tearing into the opposing building. The pink pads along the fingers and palm unharmed by the sharp glass as the dexterous digits snatched up workers to pull them up and out of view. A deep, wet, shivering inducing swallow followed by a hearty belch that vibrated the windows blasted Roy’s ears, shaking him right off his feet.

Roy coughed dust, looking back up, and trying to check to the right where the arm was leading to, just as black claws shattered through the window, sending glass shards all over as the dark figure walked past casually, shaking the whole area. Screams came up from the street, Roy crawled over to the now open windows, looking down at the street, paw shaped craters doting the asphalt, dotted with flat metal scrap and twitching figures.

The chameleon shivered and turned around to sit, staring at the empty office floor. He thought himself lucky, the others were probably part of the flattened mass in the footprints down there, he had escaped and tried to phone Noma again to tell him about what just happened. The beeping in his ears as the cell tried to connect, distracting him from the large tongue that sneaked through the window.

The phone dropped to the floor as Roy was slurped right into the tailmaw of the lynxcoon that had yet to catch up with the rest of the body, unaware to Noma enjoying the sunny day. A muffled whimper tried and failed to escape the throat of the tail, drowned out as a building collapsed from Noma just passing by.