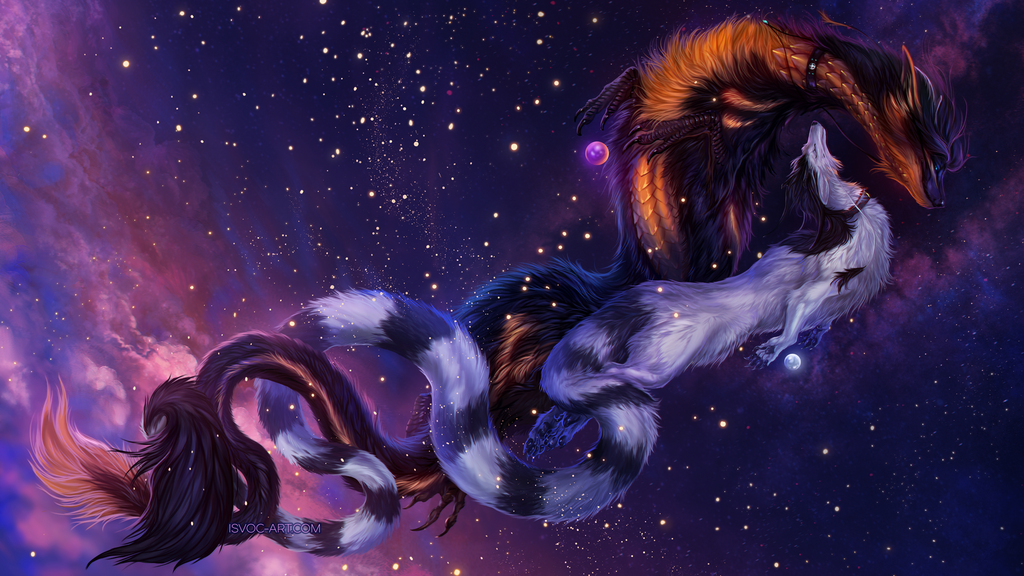 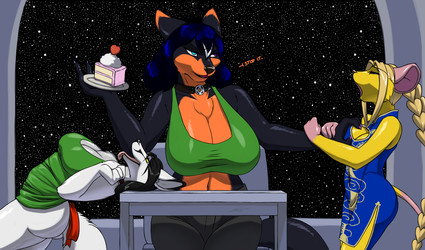 I watched hir flight with delight and mild trepidation, briefly tickled by the thought of a mother bird watching a fledgling make its first leap. Doni's attunement to the energies Taross and I exude in this eastern dragon form was tenuous enough, but adopting one of hir own, shi didn't quite shake from me the concern that it was a strain on hir concentration. Particularly, the mastery of flight. I could remember my own difficulties at hir stage and fought the urge to physically support, perhaps almost as much as shi fought the winds. Even as large as the manufactured Arboretum of Safehold is, a fledgling needs their space.

So I picked this small soft-gravity planet for us to practice hir new shapeshifted eastern dragoness form on: Oxygen-rich from abundant plantlife and sea phytoplankton for ease of breathing at altitude, generally low air traffic...less hostile locals was a plus. And spaces of vast, air current-rich fields of natural wind flow. Perfect for stretching proverbial wings. Wingless, Doni's every feature yet exuded elegance compared to my bulkier, slightly more bestial draconic figure. Hir fur--lusher and perhaps softer than mine, with no visible scutes or hide--rippled in the breeze as shi twisted. Onyx bone antlers like smooth, blunted, backswept scythes following the flow of hir skull and long neck wound counter to hir body. As shi twisted the elongated trailer of hir ringed tail--twice hir body length--writhed snakelike in a sea of air. Shi looked a sophisticated ray of frost and silver moonlight, compared to my more feral cast of night and fire.

Sophisticated...or so shi'd get there with practice, for right now shi was kicking at the skies trying to convince hir haunches to turn in alignment with hir fores. Hir grunts of annoyance broke me from my reverie, seeing hir attempt to wrest control and dominate the air itself.

"Guh! I...almost..had it. This is harder than it looks!" Shi bellowed to the skies. Padded and furred feet like canid paws on stocky legs pedaled the air, bringing hir back into upright alignment. One errant kick bapped hir dragon's pearl--storehouse of magical elemental energy partitioned off from hir bracelet--floated silently in hir wake, an ice-white moon. Shi rapped a clawtip upon it. "That was a new record! And I did not crater into the ground again!" Hir usual frustrated sarcasm was blunted a bit a sense that shi truly was getting the hang of it. "...This time."

By comparison my own lofty float was more controlled, and I brought myself about hir as shi pushed against the air to meet my gaze. "Actually you haven't done that in a while, luv. You've gotten the hang of using the currents for your adjustments? To shift weight as if you were leaning into an invisible cushion of air?" I asked, to be certain shi kept focus on what would inevitably become second nature.

The small black pad adorning Doni's foxish snout twitched with a look of annoyance that was swift but without heat. "You have been watching my big butt swing whichever way the wind blows. What do you think? I'm ready to give a longer sprint a shot! It's just...the stopping I need to work on." Glancing down, shi eyed the sprawling purple-blue grasses rippled ceaselessly in the same breeze that whipped our pelts. They hid a few dents from hir unplanned landings.

All the better: I liked sprinting right after learning to walk. I angled ahead with the wind, my own larger pearl in aloof orbit about my elongated middle like an amethyst moon picking up reflections from orange scutes.

I waved at hir beckoned. "If'n you're so gung-ho, then follow me."

So I took off with a whip-crack of tufted tail, a rippling kite of fluff and bellyscale with my gem falling in chase near my flanks. I could hear the exclamation of 'Not yet!' behind me. My maw split in a toothy laugh, and as I sensed hir gaining I steepened into a climb. Doni followed, determined to keep pace. So I willed myself faster and the magicks complied.

The eastern dragon form is so much different from my others, born of an adopted magic that was found compatible with my pendant's. It felt different. It smelled different. It responded with the difference of an E-R coordinate-jump drive system to a warp compellor drive: Like magical instinct, instead of learned skill. Tapping into that instinct was what Doni was doing behind me, and once learned, it won't be forgotten. Like breathing. Shi was doing marvelously at it.

"Higher!" I could hear hir call, the trepidation vanished for eager excitement.

I steepened and we climbed. The cloud banks loomed, lit in starlight and stained the purple and blue of New Theron's natural hue. I could feel Doni on my six: Shi was laughing, exultant, as if a breakthrough were reached. I took hir paws in my talons, pebbly scales to hir soft fur, and dove. How shi whooped! The sensation of not falling, but being thrown down, heightened. Hir hindpaws scrabbled to clutch my thighs for security but hir eyes were wild.

As I pulled us out of the dive and rocketed straight up shi pushed with me, and we knifed into the cloud canopy and shot out the other end. Hir gleaming yellow eyes spun at the clear field of stars and nebulae beyond, and with it, shi let hir clutch at control go and simply...ascended. Our tails, still entwined, rippled and whipped with the breeze to mimic the spiraling duet of our bodies.

"D'you feel it now?" I beamed as if a mother bird seeing their fledgling embrace its nature and make it their own. Hir long barbels whipped behind hir as hir head tipped back.

"I do..." Doni's eyes, closed, drank in the feel of muscle and magic as shi controlled hir flight. A radiant comet of ice, onyx, and light.


"...Awpf. Wait, whut...?" Hir prompt and graceless flail chased by hir pearl wrested another laugh from me, and I dove to follow hir sudden fall.

I have admired Isvoc's artwork and illustrations for years, since first laying eyes on them. Their talent is in my 'Artist Goals' category where I dream of putting more of my fantastical ideas to practice, right alongside the likes of Silverone and AlectorFencer (BOTH of whom you should be perusing if you enjoy good illustration). So I'm absolutely overjoyed to've been able to commission them for this piece of artwork and as a gift to my dear mate and myself, which captures the feel of what was requested perfectly. Friendly, prompt, and professional: All the hallmarks of a stellar artist and it was a pleasure working with them.

Doni takes flight as an eastern dragon, and I've taken to guiding hir as far as shi'll go. Clearly that means we chart the stars, straight into the heavens!