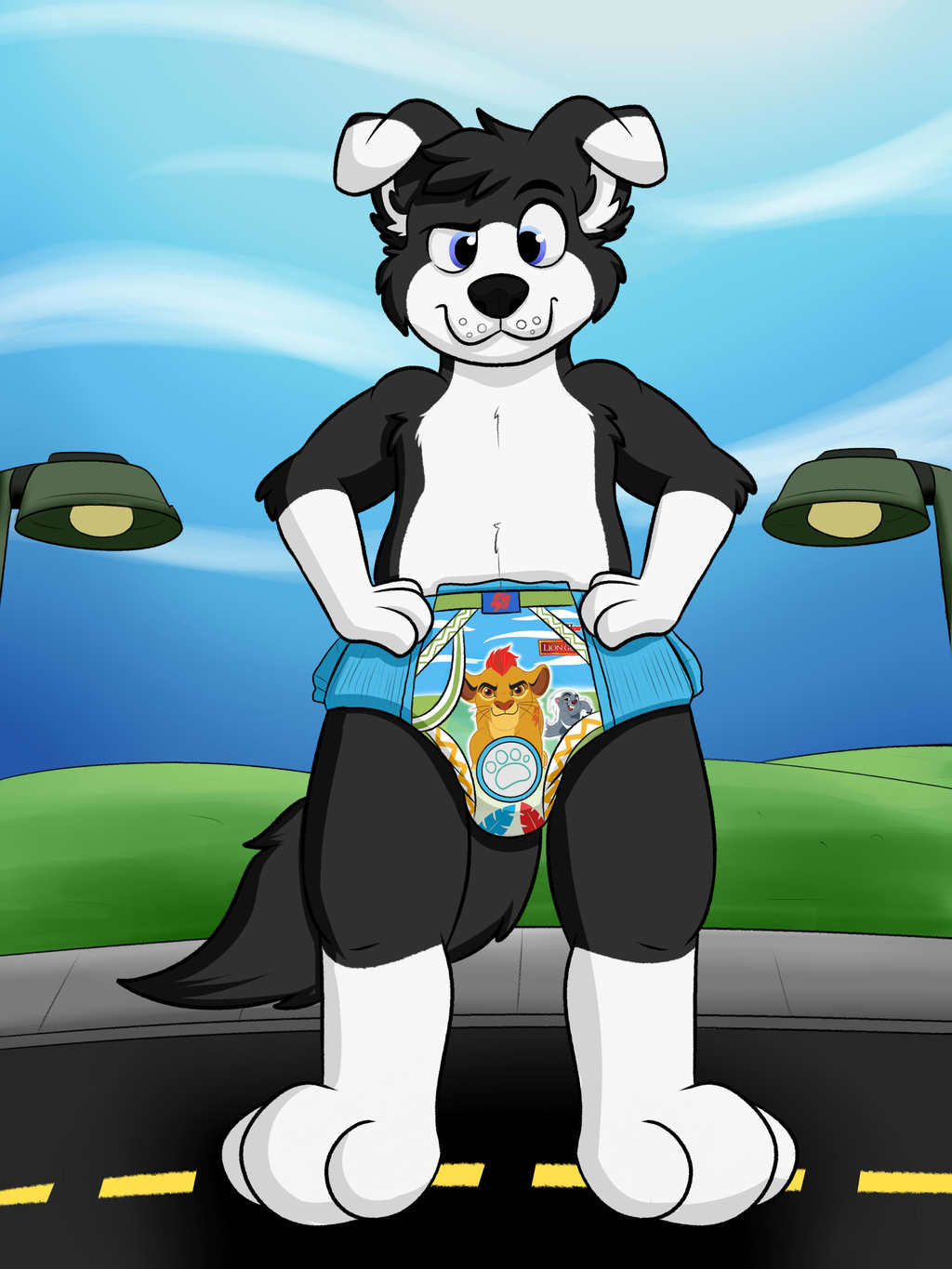 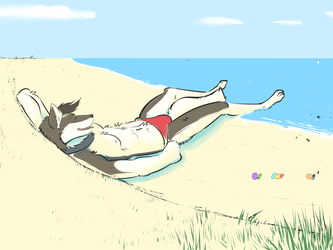 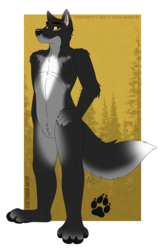 So here is my latest pic of my big and adorable border collie Adam who as you can see is looking rather proud in his new pullups. This is by the far the best pic I've ever got of Adam. It was done for in such a quick time by the incredible artist known as BaltNWolf

After being told all about becoming a big boy and the potty from Danny and Max, Adam was now ready to move on from diapers and the first step was for him to go from diapers to pullups. Having got rid of his remaining diapers both Danny and Max now had to get Adam into pullups and get him use to them.

Having got Adam up one quiet morning and checking his diaper and feeding him they both knew that they now had to get him out of diapers for the last time. "Okay big guy." Whispered Danny, holding Adam tightly "You ready for you big surprise?" Adam began to get excited as he wondered what the surprise was Danny and Max had for him. He put his hands over his eyes and wagged his tail rapidly as he was slowly led by Danny to where the surprise. "TADA!" Shouted Max waving his arms around getting Adams attention. Adam lowered his hands and saw something which look similar to what he had on. There in front of him was a tiny Max standing on top of a pair of giant pullups with a large picture of the lion guard on the front. Adam didn't know what they were and thought that they were just new diapers Danny and Max got him. Glancing at them he suddenly turned around and hid his head in between Danny's body, glancing back at them briefly. "Aw what's the matter Adam?" Asked Danny slowly and calmly patting Adam on his head. "Don't you like them?" Adam shook his head and continued to push his head into Danny's body believing that he was being given new diapers as a surprise. Max could see that Adam was not happy with the pullups and decided the only way to help was to grow big and show them to Adam. He grew to a gigantic size equal to Danny, picked up the pullups and held them out in front of him. "Look Adam look." Said Max cheerfully holding the pullups up in front of him. "There your new big boy pants." Adam was reluctant to see or accept them as pullups and continued to hold Danny tightly not wanting to see them. Both Danny and Max knew that there would be only one way to get Adam to take interest in them and wear them. Just like his diapers Danny and Max knew the only way to get Adam use to them and to wear them was for them to put them on themselves! "Danny likes them see" Said Max passing one pair of pullups to Danny. Adam looked as Danny took them off Max and began to slip them on. "See Adam I like them." Said Danny as he pulled them up and tugged the sides of them. "And Max likes them too." Adam turned to see Max putting pullups on himself and stretching them around his waist then patting them. "You wanna put yours on?" Asked Max looking into Adams eyes with a calm expression. "Put them on and be a big big boy like me and big Danny?" Adam took the pair Max was holding off him and began to take a look at them wondering how they work and how he would put them on. Danny and Max watched as Adam struggled to put them on and kept falling over as he tried to get his leg through. After a few attempts Adam began to pout and get angry at not being able to get his pullups on. "Here let me help you out." Said Danny kneeling down and putting Adams hand on his chest. "Lift you leg up. That's it." As Adam lifted his leg he got it through the one of the holes and stomped his foot down with a might boom and shake as he did, followed by his other leg. "Now pull them up." Adam slowly pulled them up and looked down to see them on him and how similar they were to his diapers and smiled. "That's it!" Said Max cheerfully clapping as Adam got his pullups on. Having got Adam into pullups Danny and Max sat him down and told him all about the potty and how to use it and when.

After being told about it Adam was eager to try out his pullups and what he could possibly put in them! He got up and began to walk across the fields and towards the edge of them where there was a long road going towards a small town. Danny and Max followed shortly behind him and watched to see what he was doing and getting ready to step in if they thought Adam was going to cause trouble or hurt himself. Adam got to the road and stood there with his hands on his hips looking down with a smile. Max slowly crept up behind and shrunk himself and ran out underneath Adam and stood there in front of him wondering what he was looking at. Adam looked down to see a tiny Max standing there below him and picked him up. Holding Max in his hand he looked at him with smile and with his other hand pulled his pullups open and put Max into them! Max landed in Adams pullups and began to slide around and move all over tickling him. Adam felt Max inside his pullups and began to move and shake his body as he was being tickled. He then heard the footsteps of Danny and turned to see him walking towards him. Adam stood there looking up at Danny with his arms spread out and a smile on his face. "Do you wanna show some little furries what a big boy you are?" Asked Danny, bending over and smiling at Adam. Adam's face lit up with excitement as he began to jump up and down with his tail wagging rapidly. "Come on then let's go show the little furries what a big big boy you are now." Adam took hold of Danny's hand and together they headed towards the small town down the road where Adam went to show those in the town that he was no longer a giant baby but a giant big boy now!

So there you have it. A little story to go with what I can see is the best pic of Adam I've ever got. There is of course going to be another one of him which will be based on the results of my recent poll on google which is still open if you wish to cast your vote. I'm not going to say what it will be so in order to see what it will be you'll have to stay tuned and keep watching!