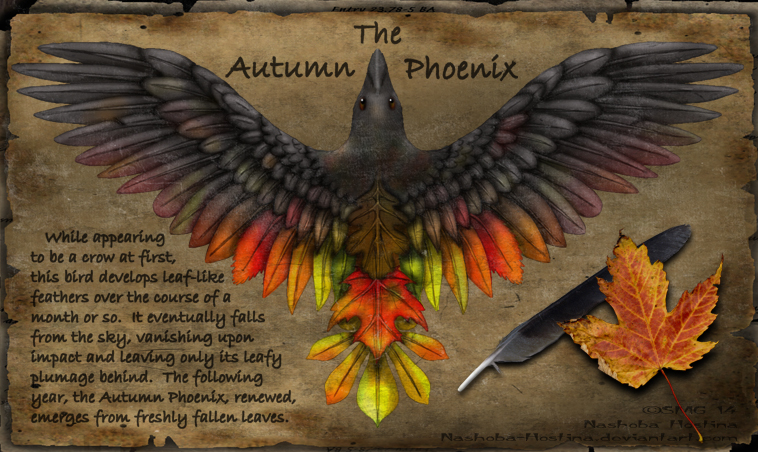 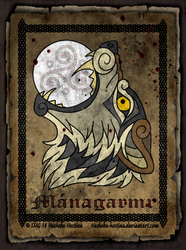 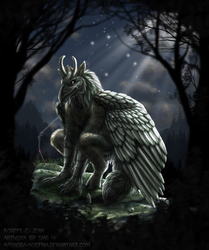 As the first leaves of fall land upon the earth, usually in the last week of September, sometimes, a small bird emerges from the decaying plants. Fragile, small, and black as an October night’s rainstorm, it is rarely noticed, yet is often mistaken for a common blackbird or grackle, when in fact, it is an Autumn Phoenix. There is much debate about whether or not this is the origin of the creature’s life cycle, because some have observed the Autumn Phoenix at varying ages in the nests and family groups of normal crows, suggesting that they may begin their lives as ordinary birds, and, through some preternatural event, metamorphoses into Autumn Phoenixes.

This creature grows rapidly however, feeding on corn, pumpkins, acorns, and, some say, wisps of chilled breath. Within a week to a week and a half, it grows to the same size and appearance as a common crow. The only way to distinguish this creature from its cousins at this point are its eyes, which, upon close inspection seem to flicker with the warm hues of sunset, ranging from gold to red to violet.

About a month from its birth, the Autumn Phoenix’s plumage begins to change rapidly, changing into a myriad of warm colors, before those feathers are molted and replaced, strangely enough, with structures that appear quite like leaves. The purpose of this change is widely debated, some say that it’s for camouflage, others speculate that it’s to attract a mate, though no one has ever observed Autumn Phoenixes breeding. Also, it’s of note that these birds are often found in places where the leaves have turned the most vivid colors. While some are under the impression that they actually encourage the trees to become more vibrant, they likely merely prefer those locations.

At the end of their life cycle, the Autumn Phoenix appears to be made almost entirely out of leaves, and one day, it merely falls from the sky. Upon impact, however, the bird itself vanishes, leaving only its leafy plumage behind in its wake. It is from that spot that, the following year, a new bird emerges, emerging from the leaf litter as the classical phoenix rises from the ashes, and the cycle begins anew.

This…. Is basically a glorified doodle. Not my best work by a loooooong shot. But I like it, even though it’s very rushed and I’d hoped to do more with this concept than just this… Sadly, other matters are more pressing. Happy Autumnal Equinox to you all!