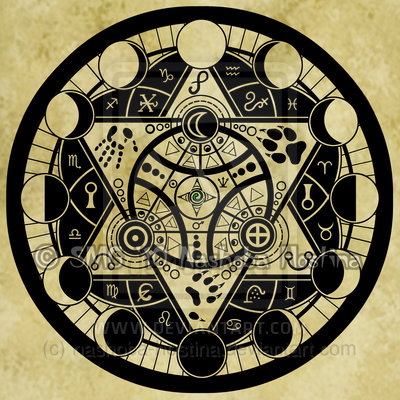 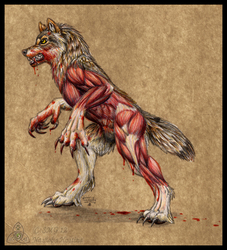 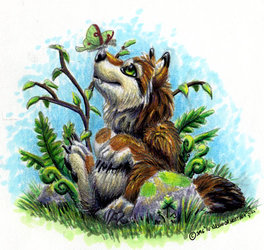 It was years ago when I located the Lunavotum. It was... crude, a mishmash of things. It appears as though it had been passed through many hands, different cultures working together to produce a whole. However, the end result was rough and ineffective. While the information needed was present, it was incomplete, and contradictory.

And now, finally… I have translated the Lunavotum into something usable.

The moons are set up to be indicators of the hours, as well as the lunar phases. Thus, there are twelve, one for each month. After all, the turning of the months is important for this particular kind of transformative procedure. However, in the center is a thirteenth lunar circle, to designate the blue moon.

Beyond the lunar indicators, the next outermost edge is adorned symbols, indicating the constellations of the zodiac, which not only allows a starting point for usage for any person, regardless of age or time of birth, but also, many of the symbols have double meanings, the elements and processes of which are conducive to the outcome of the alchemic process. The next innermost ring of symbols incorporates sigils for the seasons, and their transformative indications. However, since the months (and thus the seasons they belong to) are already established by the moons and the astrological symbols, the Seasons Symbols are arranged in relation to the lycanthropic forms. The human handprint is situated between summer and spring, seasons that humans, with their lack of fur, thrive in. Likewise, the wolf print is between fall and winter, cooler months that a furred form is best suited to. Thus, between the two polar opposites of the forms, all of the seasons are included. The hybridized form, the werewolf print is located between winter and spring, linking the two clusters of seasons, and what lies between summer and fall is unseen, and thus, Unknown (The Unknown is sometimes called upon to assist in Lycanthropic Rituals). It leaves an opening for assistance from forces beyond scientific understanding. Along with these are the symbols for day and night, the transition of which is important to this transformational course, and the duality of life in general.

In the middle are two overlapping triangles. The bottommost triangle has symbols for the alchemic processes of coagulation, purification, and sublimation, which work in tandem with the visual indicators of transformation (which are represented by hand/paw prints). The lycanthropic form builds and solidifies over the human state of being, as if coagulating over it. Then, the shape is purified into that of a wolf, before the lupine features sublimate, leaving only the human.

Similarly, each form is associated with an astronomical symbol. The human shape is governed by the sun, the Lycanthropic state is dictated by the earth, and the lupine form is ruled the moon. Adjacent to these are symbols of the four main elements: earth, air, fire and water, indicative of the different forms being made of the same substances, just in different combinations.

Finally, in the center, around the blue moon symbol, are three more sigils, each indicating a metal, which are again allied with the three transformative states. Gold is, of course, linked to the sun, and thus the human shape. Iron, the metal of blood, works with the lycanthropic form, and silver, while dangerous to lycanthropes, is connected to the moon, and in turn, to the lupine state.

I could go on… but the hour is late, and the sky is dark. It is time for the wolves to inherit the world, until dawn. So, I will retire, knowing that in the right hands, this could be a powerful lycanthropic tool. But tonight… it is just ink on paper.

… I’m so tempted to buy some pocketwatch-making supplies, and using this for the face. X3

Okay, seriously now, first off… Guys, I’m not a historian or an alchemist, and there seems to be a bit of contradictory information out there. You can do all the research in the world, but when things don’t line up, you just kind of have to improvise. (I can hear Nicholas Flamel screaming at me in the distance, can’t you?) Regardless, the fact is that there are multiple symbols that indicate the same thing, and some symbols that can indicate multiple things, and… well, what I’m saying is, if I’ve messed up on this alchemical array, sorry guys. I did my best.

This has been a long time coming. Even after I finished the original Lunavotum: http://browse.deviantart.com/?qh=§ion=&q=lunavotum#/dpwzog I felt I needed to redraw it, so it wasn’t as rough. And, over the years, I began to dislike the mosh-up of cultures. The Japanese kanji was poorly written, the alchemical symbols were thrown on with little regard to their meanings, and the Nordic runes were so badly drawn I covered them up with the Celtic-inspired triskele. I basically took everything I thought was cool and threw it together, with very little research or thought other than “This’ll look cool!”

So, I decided to reign in my interests, and go with an alchemic theme. I really find alchemy endearing, because it’s like larval science. It wasn’t quite there, and thus, still has a mystic feel, but they were working out the scientific methods we use today.