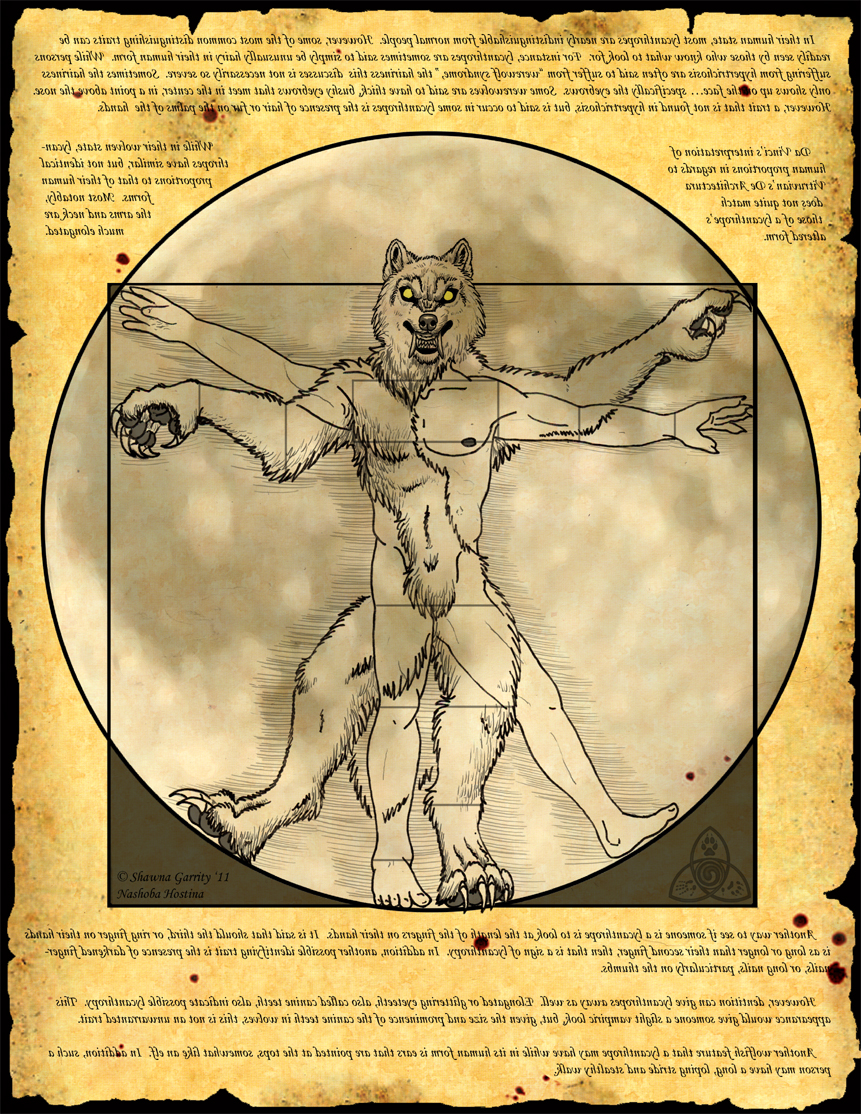 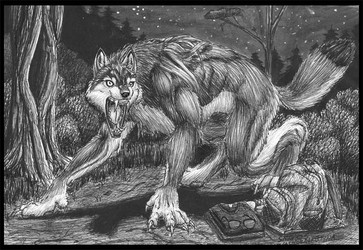 So… I love the works of Da Vinci (even though 9 times out of ten I still type it “Vinchi”) and odds are, if you’ve looked at his work even fleetingly, you’ve seen Vitruvian Man. If you don’t know what I’m talking about, then have a gander at this: http://www.guide-to-symbols.com/_images_pub2/vitruvian.jpg . Even if you haven’t seen this image, odds are you’ve seen one or two of the many, maaaaaany spoofs and inspired by works (including the Vitruvian werewolf in Harry Potter and the Prisoner of Azkaban). So what inspired this work by Da Vinci? Well, it’s in the name: an architect from Rome named Vitruvian. In De Architectura Vitruvian described classical archetecture, and said that these archectual forms were based upon human proportions. Da Vinci then drew Vitruvian Man while pondering over the architect’s work himself.

In this, I wanted to stress the shifting nature of the lycanthrope, juxtaposing the human form with the lupine one, complete with mismatched lines on the joints. While the full moon is not as prominent in ancient folklore as it is today, it did have its place, like in the Perigord, a former provence of France. Thus, the logical lycanthropic use for the cirlce used in Da Vinci’s work is to convert it into the full moon.

Also, if you’re wondering why there isn’t a long excerpt from “Seamus” here in the artist’s comments… well, for one, I’ve already rambled enough, and two, his part is in the piece. Of course, as a little tip-of-the-hat to good ol Da Vinci, the text is backwards. However, I would like to add that save for the little ‘corner’ pieces around the circle, the information is derived from folkloric sources. For more information on werewolves, please read The Werewolf in Lore and Legend by Montague Summers, Werewolves by Dr. Bob Curran, The Element Encyclopedia of Magical Creatures by John and Caitlin Matthews, andThe Book of Werewolves by Sabine Baring-Gould, among many, many others.

Odds are I’ll redo this piece sometime. The werewolf was sketched traditionally, but much of the rest is digital, and it lacks the hand-done look. But… well, digital art is less costly for me to make than traditional art.