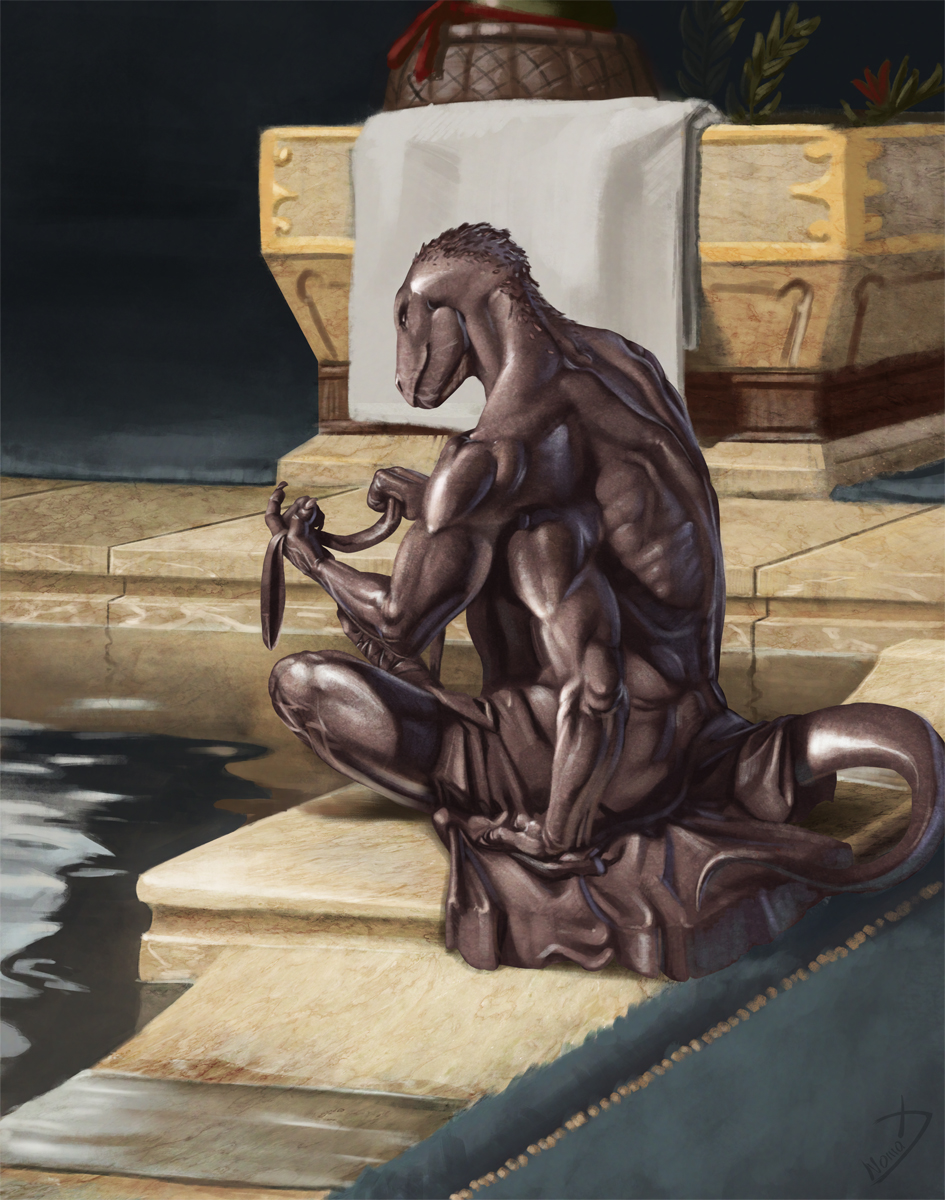 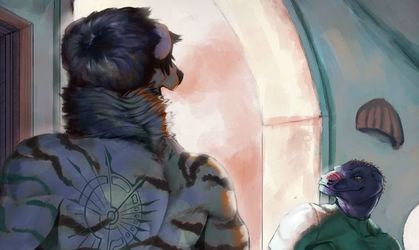 This is a commisson done by the excellent

nomax! I really love this one. The detail is incredible, along with everything else in the scene. I especially like the detail in the musculature. Four arms complicates how it all works, but I think he did a fantastic job of it.

Anyway, below is some description of the statue itself and information on the Naerian wrapping of feet and cleansing ritual.

The statue is a nude male Naerian in the process of unwrapping his feet to cleanse them in the waters of the reflecting pool. The statue is a fairly new one and was done by a famous mason. It is located in a several hundred year old structure in the oldest city on Sihv. The structure remained untouched by the conflict of the Gene Wars.

Normally, the feet are cleansed in a basin, but the large pool represents a mirror, a place for visitors to take a moment and reflect on anything they desire. The statue is doing such reflection as he unwraps his feet, preparing to wash them in the warm pool. The towel draped over his thigh and tail is not meant for modesty, as Naerians are not averse to nudity, but meant to be used to dry his feet.

Cleaning the feet is a common Naerian ritual. Naerian’s wrap the pads and ankles of their feet for three reasons: a form of protection, a way to keep the feet clean, and as a fashion. When a guest enters one’s home, it is customary to allow them to cleanse their feet before venturing further into one’s home. The majority of homes have an alcove at the main entrance dedicated to this practice. The typical setup is a basin set before a bench accompanied by a faucet to fill the basin; it is also common for there to be soaps or oils to scent the water. The alcoves, basins, faucets and oils are all tied to the wealth (or lack thereof) of an individual. Basins are made from almost any material: ceramics, metals, stone, concrete, wood, and plastics. Alcoves range from purely functional to extravagant, along with the basins. The poorest of Naerians may only have non-permanent plastic basins that are filled with a pitcher. Permanent basins are the most common, but are not exclusive to the lower class.

The cleansing is also not always done when entering one’s own domicile, or the homes of family and friends. Cleansing does not require another person, many do it themselves—a moment to sit and reflect on the day, or travails. It is never done by anyone other than those living in the home when entering another’s home. Doing so is considered very disrespectful; even the upper class and elite cleanse the feet of their guests, no matter the class or wealth of the individual entering. The act is purely meant as a symbol of welcome into one’s home, an intimate act done by the resident(s). However, depending on how it is done it can come across as an intimate act between prospective or interested partners. Oils are commonly used for the aromas they give off, as well as being good for the scales. Some oils are only used between lovers, for instance, while others have soothing effects on sore muscles and tired feet.

The ritual has been practiced for over a millennia and continues to this day.