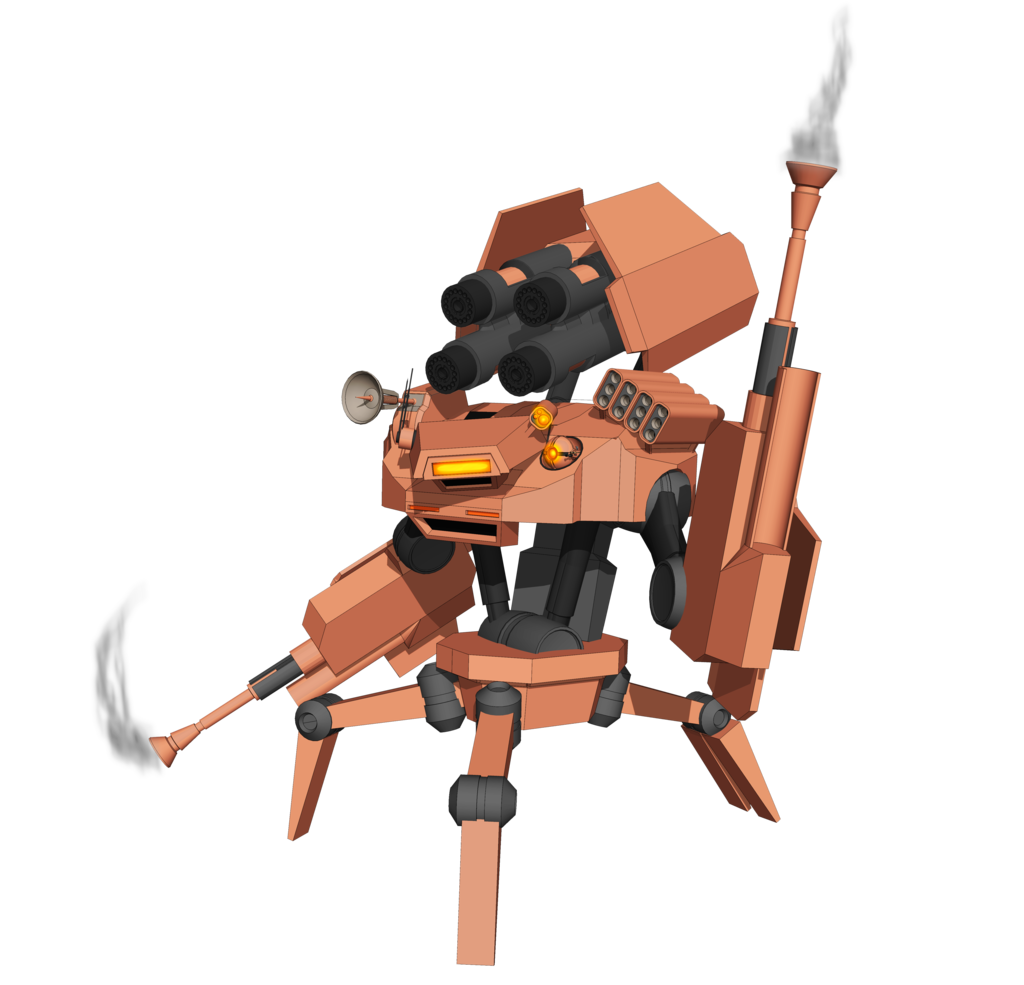 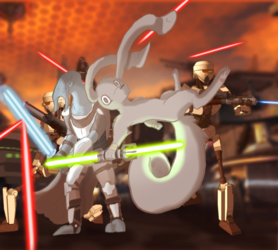 Bio:
Iron defenses, potent weaponry, and intense courteousness. WD-04D-Bx22i24/v, or ‘WD’ as he is more commonly called, was originally a S6 Maintenance Droid repaired and reprogrammed by Reno East. Reno was an eccentric Jawa who left Tatooine in order to pursue a career modifying droids. WD was one of over a hundred archaic droid models Clan Nebit repaired and altered for Reno’s pilgrimage offworld. WD acted as Reno’s personal translator, assistant, and later a bodyguard when he was equipped with a small blaster.

Reno made a name for himself in the mid-rim as an expert craftsmen and garnered the attention of the D’Astan Smuggling Ring. The organization paid for his voyage to Celanon, armed him with a high tech lab (courtesy of Czerka, through some bribery.) and put him to work manufacturing several different generations of security and battle droids for the organization. WD on the other hand, remained largely unchanged. He still served as Reno’s chief assistant, however after several inspections made by the D’Astan Ring’s founder, Hue Maxim, he noticed the little droid’s utility and asked Reno to produce another for his daughter and he. After some hemming hawing Reno decided to instead give the one-of-a-kind droid to his boss rather than make him an entirely new one.

WD was enlisted into Hue and Ytriumm’s service four years before the Sith invasion of Celanon. Despite the long period of time he served under Reno, WD never felt the Jawa was incredibly attentive towards him- their relationship was purely a master and his tool; Ytriumm was very different. Ytriumm didn’t grow up around droids- she was usually tended to by her father, and as such her disposition towards WD was courteous and, for the most part, a jovial joke-fest between the two.

When the Sith invaded Celanon and Ytriumm was forced into her unlikely alliance with then-Jedi Vanguardius and his master WD accompanied his master during the invasion and attempted to keep Ytriumm safe. During a shootout in the Celanon Spaceport where Vanguardius was given an ultimatum to serve the Sith or die, WD was crushed by Darth Tetricious while rescuing Ytriumm from the sith lord’s force grip and was inactive for nearly a year.

WD’s ‘body’ was brought onboard Tetricious’ flagship after Nathahl’s reluctant acceptance to the Sith Lord’s offer and was left in Ytriumm’s care. After nearly a year of competent, seemingly loyal work Vanguardius, and by extension Ytriumm, had been granted enough freedom to so nearly whatever they pleased within their division of the Dread Host. Ytriumm made contact with her father and old contacts on Celanon and was able to send WD’s broken body back to the homeworld for repair by Reno.

Reno repaired WD and his AI back to working condition but Ytriumm wasn’t quite done yet- With her new contacts within the Empire she commissioned for the droid’s AI to be placed in a DK-series Sentinel Droid and enhanced with combat protocols. WD’s AI was also altered so it could interact with the targetting computers aboard the Knave of Nalros. This upgrade would come in handy several times when extra crewmen were not available to man the Knave’s guns and WD was tasked with multitasking the multiple weapons using his processing power.

WD accompanied Vanguardius and Ytriumm on his mission to Balmorra, Manaan, Mutanda, Celanon, Mandalore, Dantooine and a number of other assignments by the Dread Masters before finally gaining his own individual mission to Shawken during his team’s quest to free the imprisoned Dread Masters.

WD is a one-droid-arsenal of ballistic and energy weapons of a variety of types including:

12 Kelvarex Arms Micro-Missile tubes
-WD was armed with a series of 12 missile tubes alone his left shoulder that could slot an array of different missile ammunition inside. By default the tubes carried one concussion missile in each slot, capable of destroying a large battle droid or downing a small starfighter.

2 T-43 Light Blastech Starship Blasters
-The smallest single-barrel guns found on the upgraded Knave of Nalros; the T-43 is a standard starfighter-style blaster cannon of medium calibre. Able to fire quick bursts of 200 blasts per minute, the standard fire-rate for a single one of these blasters is actually just 50 blasts per minute.
As the original intended use of this blaster suggests, it is an extremely powerful weapon, capable of damaging starfighters and, when used in a ground-based application they are essentially APC-grade weapons capable of destroying nearly any repulsor vehicle there is.