John and the Giant by Munkus69

John and the Giant by Munkus69

It was the first dry day in early summer after about two weeks of rain. The air was buzzing with insects and crickets were calling out from between the grass. The old looking farmhouse lay solitary in the middle of several acres of fields in various states of work. Some of them had still grass on them, others were lying barren. Meadows were surrounding the house on all sides, glorious flowers adding bright splatters of color everywhere and their smell hung in the air like heavy perfume.

„Boy! Where is that glass of milk that I asked you to bring me?”

John flinched as he heard his mother’s voice echoed across the barnyard. It sounded shrill, impatient and annoyed. John had been lying in the sun, enjoying the beautiful flowers after the first few sunny days and had completely forgotten about his mother’s request. “Coming!”, he cried back, scrambling to his feet and running into the house so fast that his curly tail was flapping behind him.

All in all, he was a happy, good natured pig, if a little on the runty, scrawny side of the family. Despite him being of age, he was not much bigger than a ten-year-old. But he was trying his best to please his mother and compete with his brothers and sisters. Prompt fulfillment of his mother’s wishes was the best way to please her, he thought as he dashed into the twilight of the old barn building. Hastily he grabbed the fresh milk from morning out of the pantry and searched for a goblet. It took him a while to locate one and even longer to grab one of the footstools from the table so he could reach high enough to grab it from the hanging cupboard. Being small sucked. Mostly because his mother still treated him like a boy.

His pink, curly tail twitched back and forth as he stretched, grunting lightly and wishing for only a few more inches of height. His fingers grazed the wooden surface of the goblet and turned it lightly to the right. Grunting and snorting, he bit his teeth, stretched as long as possible and manage to twist the goblet slowly closer to his fingers. “Got it!”

In triumph he punched his little fist into the air and returned to the table to pour the creamy, thick milk into the goblet. It frothed a little and a few bubbles appeared on the surface, kept tension for a moment and then popped silently out of existence. “Coming!” he squeaked, just in case his mother got impatient with him because he did not hasten enough. He had already received quite the beating yesterday for dropping a jar and the day before for not doing his work quickly enough and his bum was still sensitive. Taking extra care not to spill the milk and carefully carrying the goblet with both hands, he moved out of the house in all haste.

Unbeknownst to John, a young sorcerer in a nearby tower was practicing spells. He had just fired a shrinking bolt onto his latest experiment but had missed the rat that he was aiming for and the spell had ricochet off the metal bars of the cage. Like a meteor it shot out of the open window with the sorcerer helplessly stretching his hand out after it and screaming “Wait, come back!” as if the spell could hear him. With a sense of impending doom he watched it disappear in the distance and rubbed his head. “Oh dear”, he murmured. “I hope it is not going to hit someone.”

With the speed of a bolt of lightning, something bright flashed down into the barnyard, dousing it into the brightest shade of white hot glare that John could imagine. John barely managed to look up when the rogue spell flashed into him and smacked him into the back of his head. Confused, he turned his head and looked at who had slapped him, when suddenly, rapidly the world around him started to grow in size. The wooden goblet in his hands ballooned out massively, immediately becoming unbearably heavy. John placed it on the ground, just managing to snatch his fingers away before they got squished by the heavy wood. “What’s going on?”, he mouthed while a swallow the size of a house swooped past overhead, not noticing him by sheer luck.

The house grew behind him to the size of a mountain, the grass of the meadow only a few feet away slowly transformed into a jungle. Suddenly his vision was blocked by a large piece of dark brown cloth. It swallowed him in one large gulp and he screamed in fright, covering his eyes. It took him a moment or two to figure out that he was not dead. Trembling, with tears running down his face, he lifted his hands from his eyes and looked around. He was sitting naked in dark twilight, surrounded by gargantuan ropes that heaped up around him. Sniffling and smearing quite a large amount of dirt from his hands onto his tear stained face, he sat there gazing around. There was a brown button the size of a carthorse a few steps away. What was going on? Had he been spirited away?

“Mommy?”, he quietly asked into the silence. 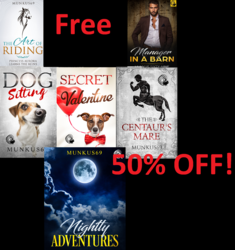 John and the Giant

You can read the full story on my patreon account: https://www.patreon.com/Munkus69 in the 21 category