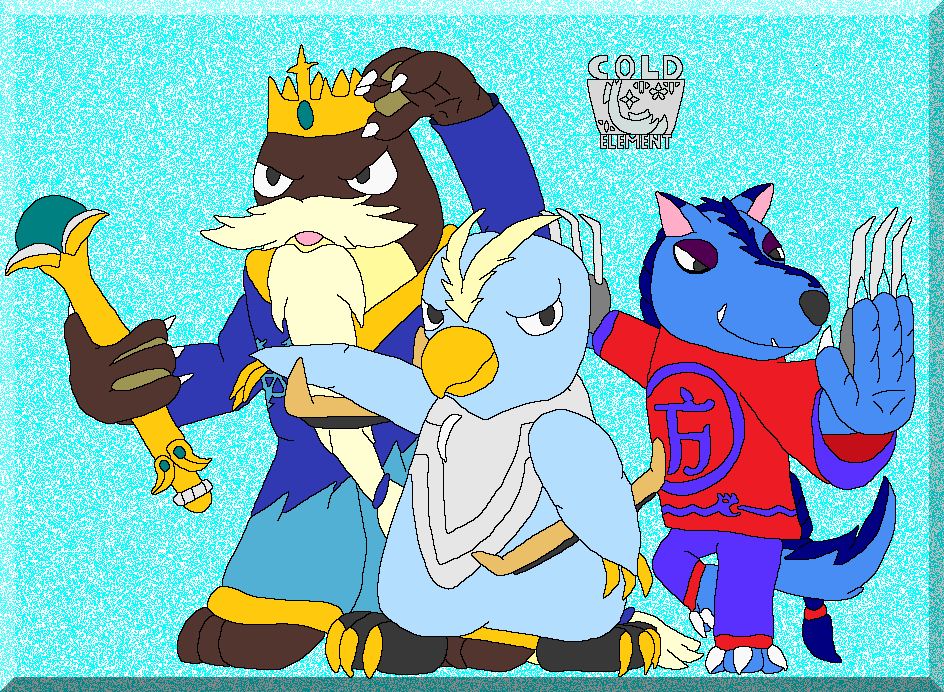 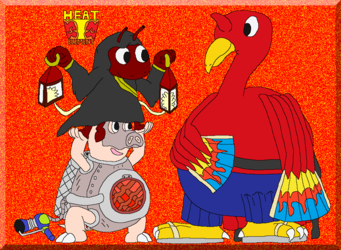 What is the Elemental Force? It started out as the concept for sort of a Skylanders inspired spinoff of one of my character's worlds: belong to Grah the Koala: http://www.furaffinity.net/view/8647768/

It's starting to turn into another cartoon concept of mine. Still, it's in the fleshing out process.

In Grah and Gina's world, there exists a league of heroes known as the Elemental Force. This large group of renegades made their debut only a year ago, but never became known until a hideous villain known as The Cloak appeared. Grah and Gina were attending a party "In Their Honor," that happened to be a trap used to lure a large amount of animals into a room to have them all poisoned. But their plan was foiled by the Elemental Force. Bobsled the Penguin was the leader of a small group of 4 Elemental Force members who attended the party. One of the members, Gas Giant, stayed in the dining hall while Bobsled and his friends Gear Head the Rhino and Battery the Bat stayed to the halls. Bobsled, Gear Head and Battery fought the badguys, while Gas Giant neutralized the poison. This was their first major appearance.

The Elemental Force is made up of 30 members, 2 less than the original Skylanders. There are ten different element houses, with 3 members to each. The ten elements are Cold, Heat, Water, Lightning, Earth, Wind, Life (Which is life in general, not just plant-life. So even Undead characters would fit in Life), Poison, Steam, and Cyber (Steam and Cyber are both technological elements: Steam being older technology, Cyber being newer technology). As well, each member has a multiple number of moves: usually 8 or 7. But in a video game environment, they can only use 4 at a time. (The idea is that the characters: As figures, sit atop these discs that determine their moves. Each character comes with either a Disc A or Disc B).

History: Bobsled is the first member of the Elemental Force, and the captain of the Cold House. Ever since he was a kid, Bobsled wanted to be a hero. And being a penguin, he took his inspiration from skiing and sledding. In addition, he studied magic ever since he was 10 in order to use powers that felt right to him, and what eventually worked for him was the ability to freeze the ground. Bobsled even wears a sleek slippery suit and a pair of skis on his fins to help him along. It wasn't until he was 18 that he went on his first mission to stop a bank robbery. ...Which sadly ended in failure. ...Fortunately, superhero veterans, the Super Sewer Rats, where there to help.

Afterward, the Sewer Rats helped him... Wait a minute! I never showed the Super Sewer Rats on FA, did I? They were an old set of characters I made for DA. I haven't gotten around to uploading some of my older work on FA yet.

...But anyway... Afterward, the Sewer Rats helped him work on his powers a bit, and he eventually became more competent as a hero. At his current age of 19, he met several others who had the same interest as him in becoming superheroes. And that's how the elemental force started.

Bio: A mysterious wolf with a questionable motive, Yin-Fang is a foreign creature from a distant land. Not much is known about his back story except for tales of a massive heist that was ceased by a single wolf. Many maimed villains cent to the hospital muttered the name "Yin-Fang."

There were other tales told about "Yin-Fang," but these happened elsewhere. Eventually Yin-Fang found her way into the Elemental Force. ...However, she revealed nothing to any of the other members. She only requested to join. On the job, she has shown her abilities in battle. She can release dark energy and is a brilliant martial artist who could possibly rival Flame Fanner in terms of abilities.

Bio: The tragic king, Olaf Laudry, heralded for his kindness, his fair rules, his thriving kingdom, and of coarse is incredibly long beard. Olaf was beloved by all who lived in his icy kingdom, giving him the nickname "Saint Shiver." Besides this, he was also a powerful magician, helping to keep his kingdom from falling in the wrong hands.

... But one day, his throne was seized by an otter who called himself Gar Rechik. Gar Rechik fought Olaf Laudry in private and won. The Saint was held captive in a secret room while Gar ran his kingdom to the ground. Death rate became unusually high, many were trying to leave the kingdom, and everything was terrible.