The Doomed Ship Down and Out by moyomongoose 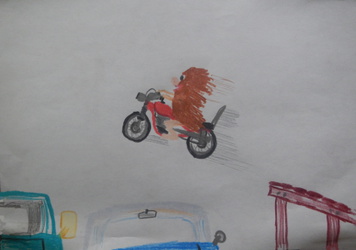 The Doomed Ship Down and Out

The drawing of this ship got it's inspiration due to a certain artist who is continuing a pity party on FA because of being kicked off of IB a couple of weeks ago.

About the ship and crew;
The H.M.S. Down and Out (with a name like that, no wonder it was doomed) was a merchant cargo ship that was also outfitted with 8 Merchant Marine cannons, as well as a small arsenal of long barrel muskets, for defense against pirates.
It becomes obvious that the guy looking out from the big hole in the hull is the m/f who caused the Bubonic plague to be brought aboard the ship.
At this point in time, if the crew ever found out he was the one who caused the introduction of the plague aboard the ship, they'd toss his ass overboard for shark bait...along with his "pet" rats.

Damage to the ship is a result of a scrape they had earlier fighting off a pirate ship.