Obsidian and Gold by MissMonie 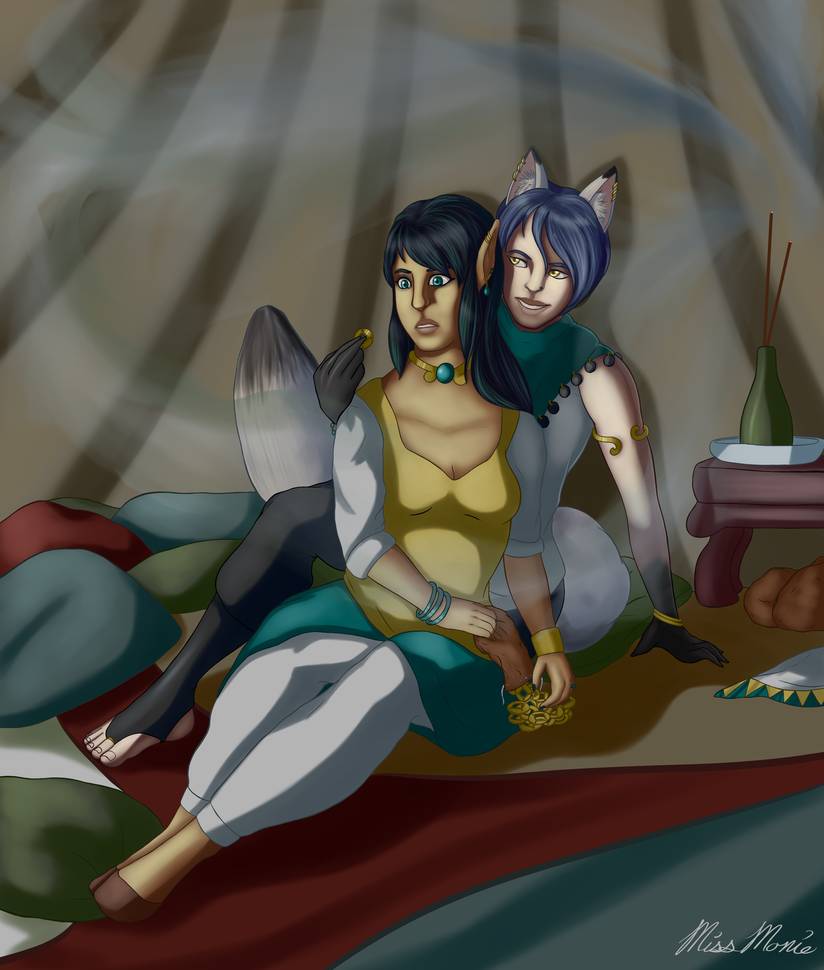 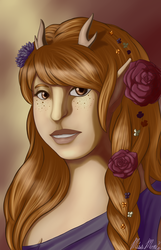 This was a lot of fun to do. I may have to draw these two again in the near future.

With the last of their clients gone, the pair of “fortune tellers” returned to their tent with the day’s spoils in hand. Kaeko parted the heavy curtains, allowing Monifa to duck her head under. She removed the patterned scarf from her hair, tossing it carelessly to the side as she placed a few of the heavier coin sacks on the floor by their table. Kaeko’s tail swished at her side as he moved to light two sticks of incense, settling them in the vase.

“Today was more lucrative than yesterday.” She called with a small bag of coins in her hand.

“It was.” He agreed as he waved his hand to extinguish his match. The heavy scent of copal smoke floated through the open space. “It seems our reputation has reached an audience.” The fox pivoted on his foot, heading for the pile of pillows.

“So it seems.” The elf agreed with a pleased hum. “Though that means we have all of a week before someone discerns our true intentions.” She watched him sit before settling against his lap. The bag clinked as she turned to the side to empty it. “What are you burning?”

Kaeko moved a hand down to pluck a coin. His tail flicked to the side and he stretched out one leg to her side. The smell hung heavy in the air, pushing itself into her nose and down deep into her lungs. It left them feeling thickened, each breath deepening.

“It’s an incense they burn in the temple. I found it in the market. Does it bother you?”

“No.” She shook her head but had to admit it was an interesting aroma.

The pair lapsed into silence as she dumped the coins out. She could hear the subtle tink, tink noise of Kaeko’s claws against the gold. The shadows on the curtains shifted, and she felt Kaeko press forward. His hand appeared by her shoulder, a coin offered. Her head turned and her eyes caught on the gold before moving down to notice his claws. His extremely sharp claws drawn into a point at the tip. They glimmered in the light as he moved his hand. Had they always been that sharp? Hadn’t he said...they were...made of...obsidian? Didn’t priests of his order use obsidian blades for...sacrifices? Her breathing picked up, the incense flooding her senses.

“I wonder,” his voice breathed in her ear, his smile palpable, “how easy it would be to...” The words trailed off as she focused on those claws. Her imagination flooded with possibilities.

I wonder how easy it would be to cut you open.

Monifa belongs to me