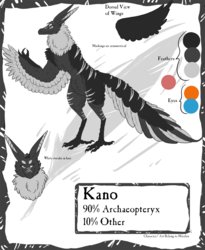 I finally finished this...and it's part one. Part two will have his anthro form, but it's mostly just for people who want to draw anthros. I almost always draw Khaizyallé as feral. There's not much to add about him other than he's short and likes tea. He generally doesn't have any exaggerated expressions (ex: he never gets suuuper happy, excited or sad).

Khai has a short fuse and generally likes to be left alone when he's not at his shop. Speaking of which, he sells tea, oils, and vinegar out of a decommissioned light house. He used to be human, but was turned into a gryphon as punishment... what a shame :c

Character and Art belong to me (Miryhis)