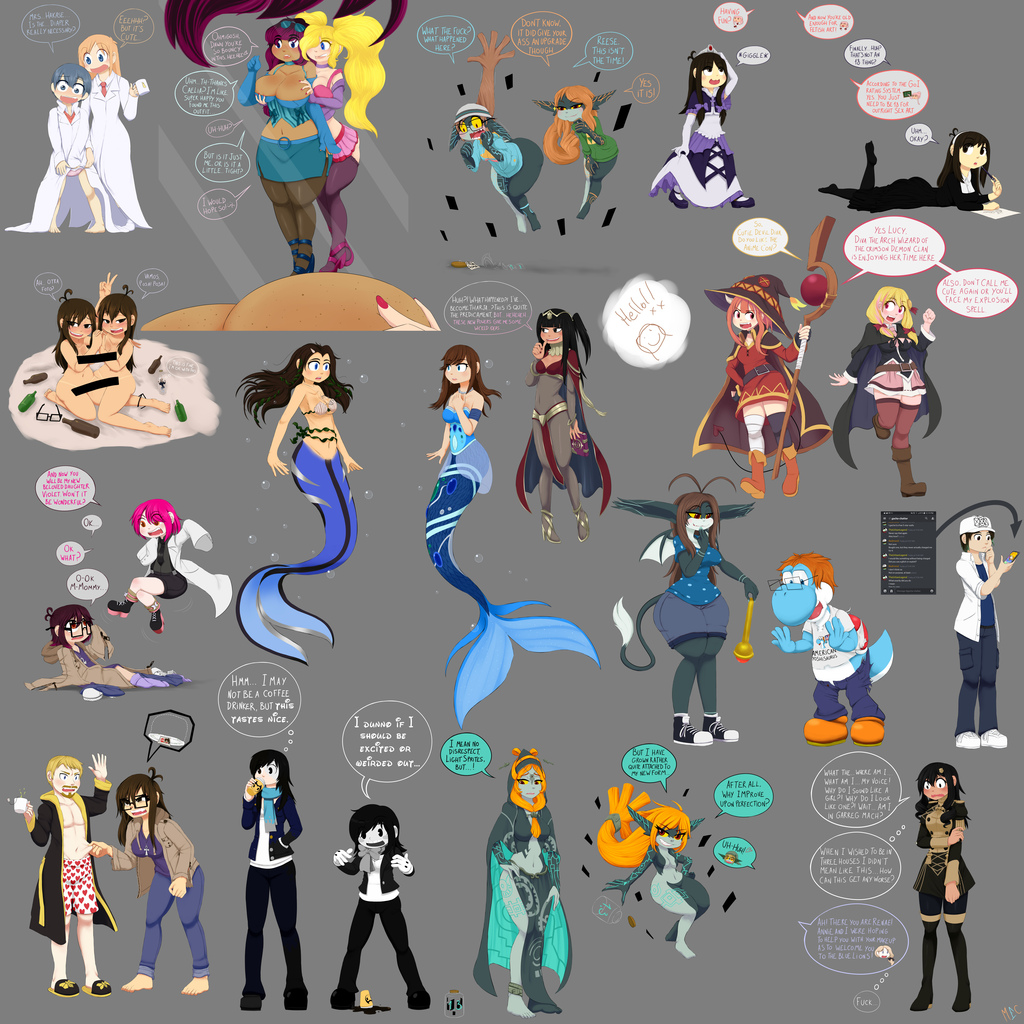 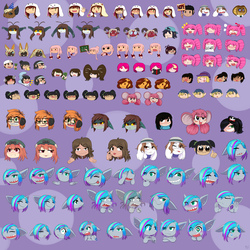 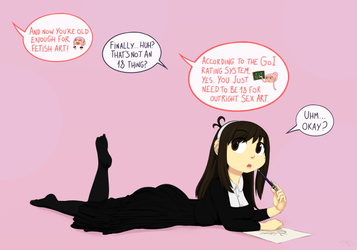 Boy oh boy this Stream Batch surely took a while, four streams, all of them super long, and the slots filling up pretty much instantly >3>

I censored some bits of the only NSFW pic in the batch in order to upload this as general content, you'll be able to see the uncensored version once I posted the separated pictures.

1º Annakatan started off this batch with a cute lil' Age Regression, or maybe Age Swap, of Nichijou's characters Nakamura and Hakase, after Nakamura became Hakase's apprentice she should have expected her whimsical, crazy experiments to take an unexpected turn, much to her detriment, she's now younger than Hakase was when first built Nano :V
2º evobedevo & Kachopper9000 commissioned a Bimbofication POV pic, starring their characters Dawn and Caelia, pervy Caelia gropping bouncy chubby Dawn :3c
3º SomariaMoon got a pic ProtonJon and Lucahjin, being affected by the Bottled Twili Particles of AGW 1.3, turning both into imps, with the added plus of turning Jon into a particularly t h i c c female one, but Lucahjin is clearly quite fine with this outcome.
4º - 1, 2 - LyhokoLeaci got a new addition to the Yuno Drain set, where she regressed and adopted me as her daughter, with the name Hina Hana, (a direct japanization of my real name). And acquiring some japanese physical features, such as clearer, more yellow skin and darker hair, as well as some other added bonuses like better eyesight. The first panel must have happened like a couple years after the previous pic, just playing around having fun pretending to be a princess, for the other one it's clear it's been years, but my passion for artwork wasn't altered, wearing one of the style of clothes that is typical of Yunos. And even got the same type of double ear piercing mom has- I mean Yuno has.
5º Infuscomus Aah, is this a sequel to this picture? Or an entirely different thing altogether? Me and a my clone having gotten completely smashed at the beach, posing naked for a lucky photographer, of course when you've drunk that much you may revert to your native language, the translation being "Ah, another photo?" "C'mon, pose! Pose!" clearly whatever shame I had drowned in alcohol a while ago :V
Infus meanwhile peeks from inside a nearby empty bottle, in a sprite/ghost form, is he granting wishes? If he tells me to go fuck myself does he means it like this?
6º TheRoseQueenAlexis right below infus is ANOTHER picture starring me :V seriously, what is it with this batch? Lol, well, it's Alexis herself alongside me, Alexis is some other of child scientist genius, barely capable of wearing that lab coat and still wearing diapers even though she's supposed to be 5, yet capable of floating and somehow regressing me to just 3 years of age while also affecting my appearance to slightly resemble hers, or at least combine both into a nice mix.
7º theheroofdarkness got this lovely mermaid pic, part direct sequel to the previous Mermaid Tia pic as well as this other version from several years ago, known as Jenny, who apparently also managed to get herself mermaidified, but both originate from the base male HeroOfDarkness, so how is this meet up even possible? O:
8º TheUrbanLegend52 got themselves Tharjafied, I guess that'd be the correct term? Tharja from Fire Emblem Awakening, quickly going from shocked to wondering how she can use her newly gained powers to... U-Urban, What are you thinking about?
9º My sister came over for a visit around this time, contributing the "Hello" you can see right inside that lil' white bubble :>
10º Lordtombond & AllenWalker88 got a pic of their characters Diva the Devil Class President and Lucy the Witch cosplaying as characters from KonoSuba, Diva dressed up as Megumin and Lucy as YunYun, having a grand ol' time at an Anime Con
11º Malkaiwot & AmericanYoshi right below them commissioned a pic of Imp Malk, magically transforming poor AmericanYoshi into... Well... A Yoshi, I mean it's kind of your thing, why are you so shocked? I find Malk's sever t h i c c ness to be much more surprising.
12º Redmond17 got a sequel to this previous pic, he's slowly getting sent to Gacha hell, acquiring 'em waifus, but now the No in the option is kinda faded? And Redmond is looking... Different? What's wrong with these purchases?
13º Nassley ate my fucking Churrasco Palta! He's strolling around in his bathrobe with his tea thinking I wouldn't notice, there was nobody else around, so who the fuck ate it?! You greedy guiri twat!
14º Mad-Hatter-Ison tried out some Bendy branded Coffee, resulting in her getting toonified into a classic 30s/40s cartoon style, does this comes with some type of added powers?
15º Nathan B got a new addition to the Bottled Twili Particles set! Midna has just turned back to her true form, but... You know how just when you finally get the chance to get back something you had you realize the new you was happy without it? Well, turns out Midna prefers to be an imp, lucky her there were some Twili Particles laying around, and of course Link is super happy she gets to keep that form.
16º TheUrbanLegend52 got a second pic in this batch, into a Garreg Mach student from Fire Emblem Three Houses, I mean c'mon, you wished to be in Three Houses, why would this be a bad outcome? Don't look at gift horse in the mouth and all.