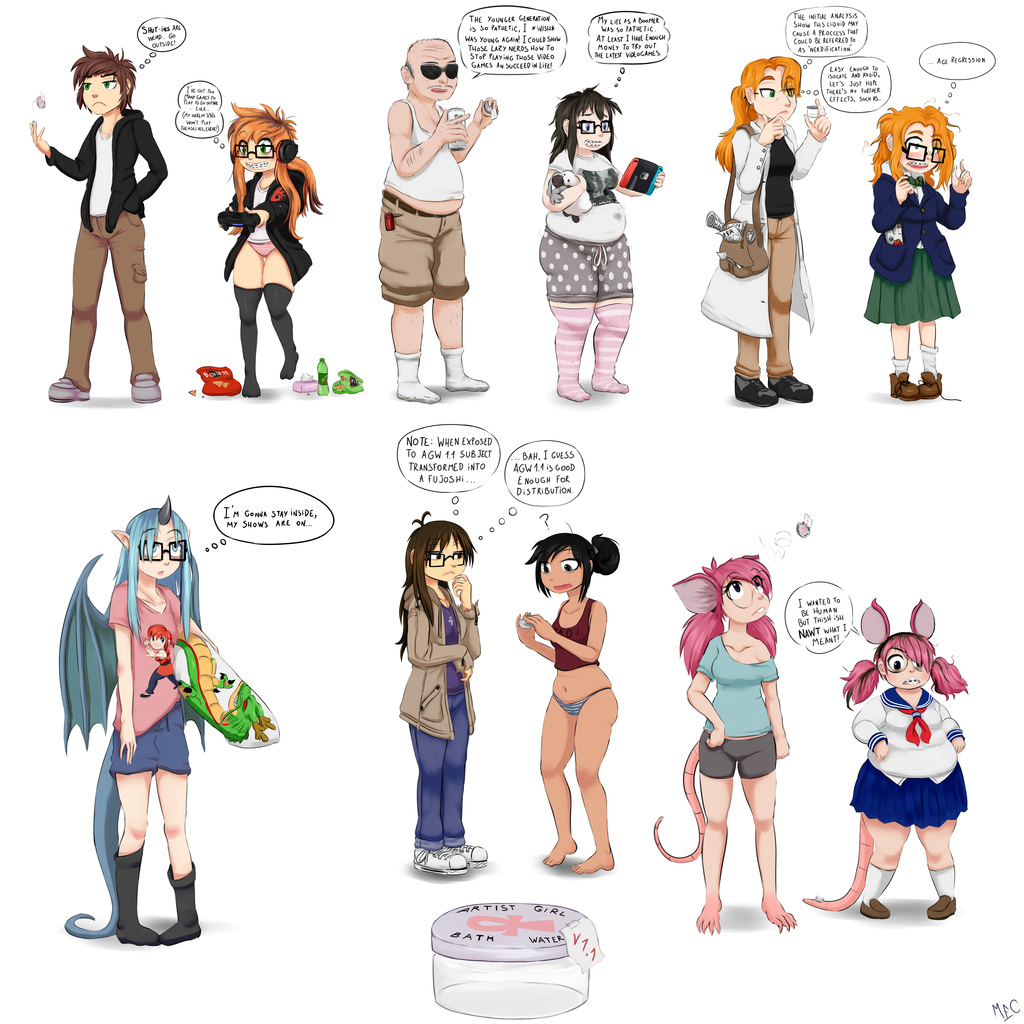 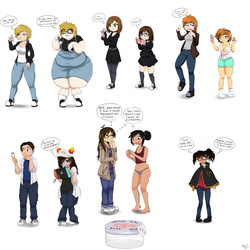 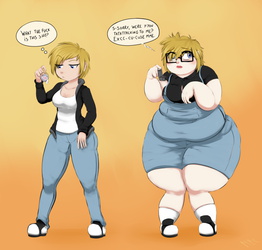 Second page of the Nerdification sketch stream event, the idea of AGW was a play on Belle Delphine's Gamer Girl Bath Water, but with the twist of it causing Twinning when taken, the version 1.1 no longer causes Twinning, but it now has TG+Nerdification effects:

The pic is also placed in the bottom middle of both canvases as you can see, so apparently I don't really care about any nasty effects the AGW may have :T

1º DismalDetractor Went from a shut in hater to an energetic shut in gamer gurl! If not exactly fat on her way there, spending all day playing eroges and eating gamer fuel isn't going to help, and it's already showing on her thighs :V another poor dye job, the lil' thing tried to look like Futaba.
2º JJWcool went with a Cracks open can of Monster Zero SIIIIIIIIIIIIP, a Boomer, the grug variety specifically, lawnmower keys ready and even shreds of grass on his socks, incapable of understanding younger people and why they don't own a house at age 25. Tuuuuuurned into a fat zoomer nnnnnnnneeeeeeeeeeeeeeeeerd, memetastic with her Todd Howard approved Skyrim Meme shirt, pimples, braces and dirty comfy clothes she definitely doesn't changes often :v is this is a positive change tho?
3º OREOSOME's Miss Dearing is a 37 year old scientist, smart enough to realise the dangers of Nerdification inside the flasks, and capable of removing said effect, but as with every evil invention there's a second trap waiting, it also causes age regression, and it just so happened that Miss Dearing used to be quite the nerd when she was in school, complete with braces, a complete set of oversized clothes and D&D paraphernalia.
4º Dracos123 ooooh boy, Dee turned into Ner-Dee, if you aren't familiar with her she's usually quite physically capable. Now she's a lanky hikikomori who would rather stay inside and watch her animes. I had quite a bit of fun with details here, Dee is a dragoness, so of course she'd lust over some sexy dragon like Shenlong. Considering Dee's usual appearance I picture this form being the nightmare she wakes up from screaming, Kakyoin style.
5º TurboSalt's Levi the rat girl actually managed to turn into a human, at the cost of becoming quite the fat otaku nerd, her ears and tail turning into fake costume pieces, her hair turning brown with a considerably poor dye job and of course her teeth, which actually stayed the same size as her rat self, complete with braces causing her an obvious lisp :y

And that's that for the set, it took forever to do the whole thing, as usual had to cut the stream in half, with the first part being 17 and a half hours of continuous streaming (Yeah, I'm kinda crazy) and the second part being 8 hours long, making the total 25 and a half hours total to draw all these :y

It was indeed super fun