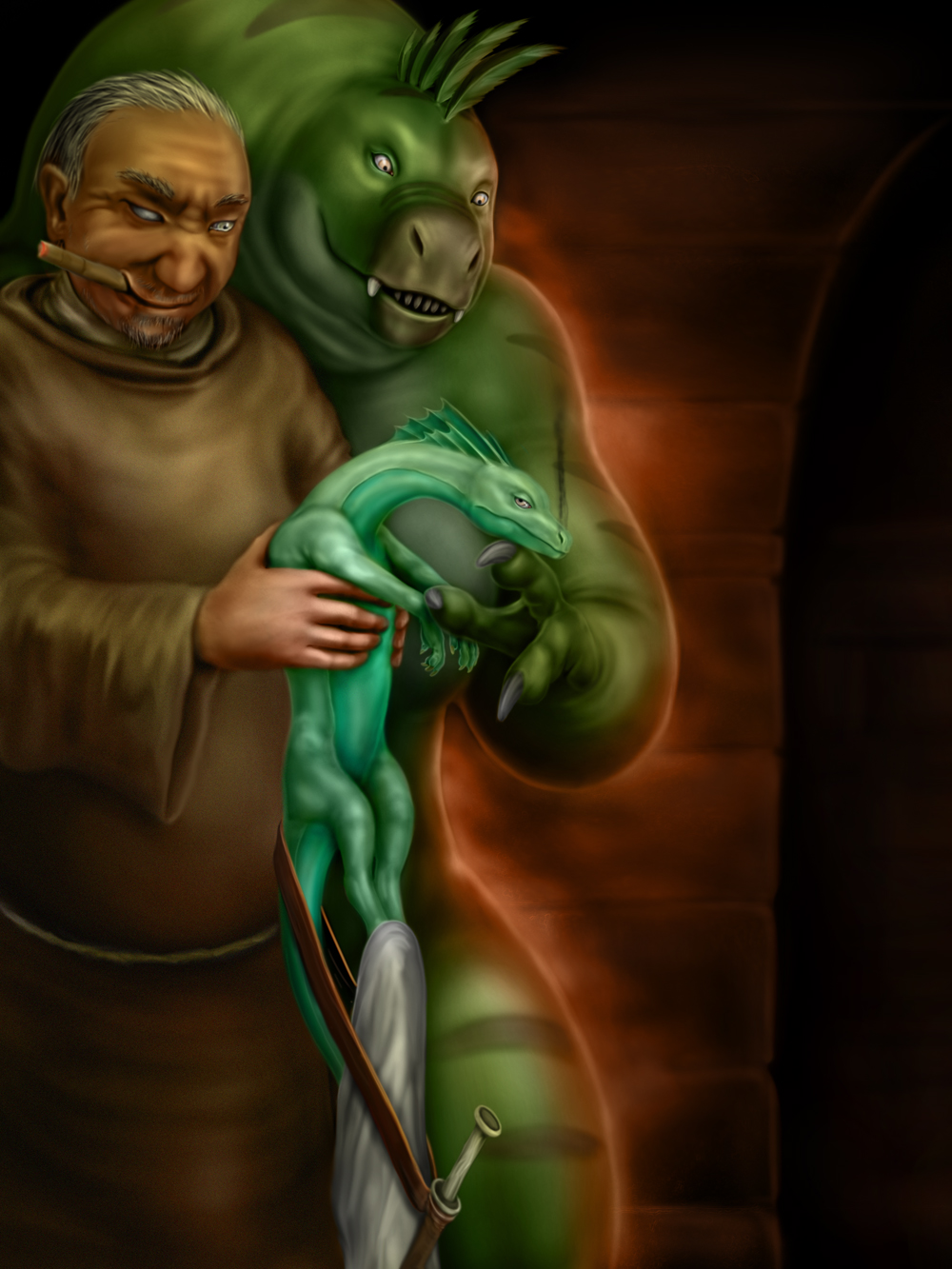 Folder:
Tales of Ezagros I - Devoured by Fate 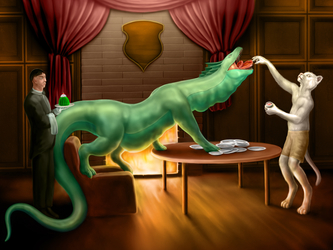 Tales of Ezagros I - Devoured by Fate - Part 1

Nobody has ever made it this far down. Boots haven't touched these ancient stones in centuries. Oh, scratch that. The skeleton on the left is wearing boots. I raise my left hand and prepare to cast an acid blast but Jonas pushes my hand down. "Save it for when we face a real threat." The priest's voice is gravely and I can't help but feel like he's talking down to me. He looks back at me for a moment, moving his awful everlasting cigar from one corner of his mouth to the other with just his lips. The old guy really should shave. And get a new robe. "I spent the last four fights on the sidelines, casting defensive spells and that one mummy definitely counted as a real threat. I want in on the action, you know?" My protest falls on deaf ears.
A large three-clawed hand lands on my shoulder and pats it. Izumi, the owner of the hand, steps past me. The huge green allosaurus woman causes little bits of stone to fall from the ceiling with every step, her massive and round form blocking my view of the skeletons for a moment.
The last party member, diminutive Clere, holds back with her bow. Arrows don't impress skeletons anyway and she is here mainly to make sure we don't walk into traps, and to open locks. At five-foot-three and only a hundred pounds she's by far the smallest party member but don't let that fool you. Mess with her friends, and she will organise a party in your neck, and only knives will be invited. She stands ready to join the fight if need be, relying on her magic armor bracers (created by yours truly) and speed-enhancing boots to get around with lightning speed. Whenever she does, her shoulder-length hair becomes a jet black blur behind her head, I like that effect. For now she holds back with the rest of us, her brown eyes full of focus.
Before Izumi stand three skeletons, all wearing the remains of some ancient armor. They wield large serrated swords that will leave terrible wounds on anyone unprotected. Fortunatley we've learned how to deal with these things. Izumi brings down her club on one of the skeletons while Jonas casts a spell banishing undead from a small area. It won't work on enemies who are attacked but because Izumi attacks only one at a time, the other skeletons just stand back. Mindless minions of some long-gone villain, they are really only a threat to those who rush in headlong.

And then everything goes tits-up. Izumi's clawed feet push one of the floor tiles down, and the whole floor tilts down, sending us all sliding down, together with the hapless skeletons. A few seconds later the slide deposits us on the level below. Our asses meet with the hard stone floor but we have no time to assess the damage. We're in a large room with alcoves in the sides, a pedestal with a green glowing thing on it in a corner, and about two dozen assorted undead standing around, including several mummies. As soon as we arrive, they attack. Izumi slowly gets to her feet - being fast is the one thing she's not good at. I myself don't wait for permission and just fire an acid blast at whatever looks particularly dangerous. Jonas chants some spell, I think it's a holy fire blast or something. I wonder if his god minds that the priest says his chants with a cigar in his mouth. One of the skeletons - I think it was a predatory animal in life - lunges at me and I do my best to dodge, bumping into Clere. She curses as I interrupt the barrage of arrows coming from her bow. "Damnit Ted, watch it!" She glares at me for a split second before resuming her arrowing tale. She likes to be good-humored but in combat she's all business. Unlike Izumi. The allosaurus woman has finally righted herself and looks around, scanning the enemies with a grin on her snout before stepping towards the one that is attacking me and slamming it into the ground with a single swing of her club, only inches away from my face. "Bad kitty!" She looks at me, grinning. "No, not you. You're good kitty." Then she roars and jumps at whatever enemy is now closest. I fire off more attack spells left and right, and hope I hit something. I used to make it a point of pride to be able to hit things with spells rather than having to rely on area-of-effect spells like most sorcerers do. Setting fire to an entire room sounds impressive but is less useful in practice because you're usually in the room. But right now I'm just frantically trying to mow down skeletons and zombies before they swarm us. Jonas finishes his spell and the weaker undead near us burst into flames, giving me some breathing space. He immediately follows up with an accusation towards Clere. "Weren't you supposed to check for traps?!" She snaps back without looking behind her, firing several flaming arrows. "Then don't pick fights in a corridor I haven't checked yet!" While they argue I pick a target, a mummy that seems to be in the middle of casting a spell, and cast my own spell to interrupt it. Bad idea. The spells react and combine into a massive explosion that knocks us all to our feet.

When the smoke clears the living are the only things left standing, as it should be. Izumi is covered in cuts and bruises but Jonas is already at work patching her up. That's how it always goes, really. Clere has been thrown into the corner with the pedestal so I head over and help her up, handing her her bow. Her hair is a mess and full of dust but she'll be alright. I seem to be the only one who is largely unhurt. My cat reflexes served me well, again. My white fur is covered in dust though, I feel so disgusting. I shake out my black robes, I can do at least this.
Jonas and Izumi walk towards where Clere and I are standing. "Wasn't there a glowy thingy here just now?" Izumi asks. Jonas looks around, and when the rest of us join in the search, we also notice it is gone. It isn't until Clere spots a broken glass jar with a black orb next to it that we figure that that's what used to be on the pedestal. She examines it and shrugs. "If there was a trap on it it was sprung when it got knocked off its pedestal." I pick up the orb and do a magical examination. This is some pretty powerful magic, not something you'd buy in a store. It's also unusual enough that I have no idea what it does. I inform the others, and Jonas has a go at it - he always does, and he never finds anything new, but I might as well humor him.
While Jonas is doing his 'examination', Clere grunts. I look towards her and notice she is hunched over, her left hand reaching down to her crotch. "Er, are you alright?" I ask, unsure whether I should be asking this, or leaving her to have some private time. "I... don't know... I feel so weird." Her voice is uneven, like her footing. She also seems to be shrinking. There is a groaning sound, like rubber dragged along wet concrete. I catch a glimpse of her eyes as she looks at me while vanishing into her clothes. Then I'm left staring at a heap of clothes and equipment, with some movement going on under it.
"Er... is that supposed to happen?" Jonas scratches the back of his head as he looks down at Clere's clothes. "She got even tinier!" Izumi quips. Jonas reaches down and searches the clothes, then his eyes go wide. "What in the hell?" When he rises again, he has a tiny dragon, or lizard in his hands. Izumi scratches the little dragon under its chin. "Oh Clere is a lizard now! She's so cute!" I don't think I've ever heard the dinosaur woman giggle.
Clere sounds different now, her voice is more high-pitched now than before, but it's still very much her, and she sounds annoyed. "Great."