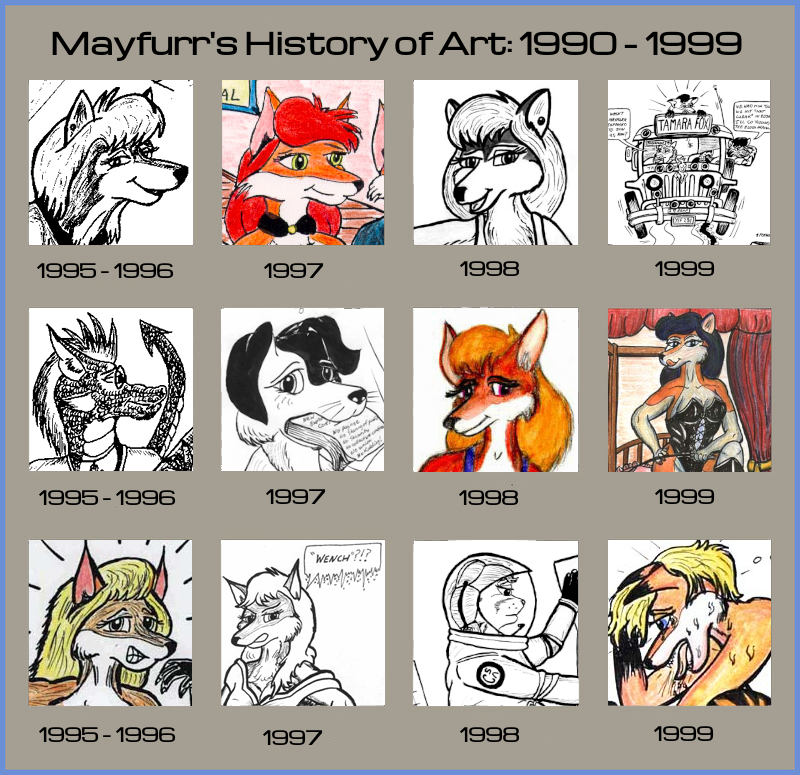 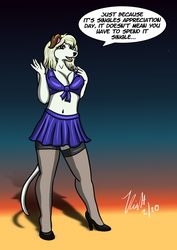 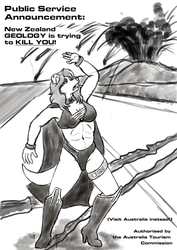 So I was organising some of my artwork the other day, and noticed that while I have "Decade of Art" summaries for the 2000s and 2010s, I was missing an equivalent from when I started doing furry art back in the 1990s (probably because the "Decade of Art" thing wasn't a thing then, back in the days of the "Avatar" art archive and alt.fan.furry on Usenet.

Therefore, presented for your viewing pleasure is a summary of the art back in the days that time forgot, when 28.8kb/s dial-up Internet was the bee's knees and the number of furry cons you could go to could be counted on one hand and you'd still have fingers left over...

Column 1 - 1995-1996:
The earliest scanned art I have is dated 1995, and is of the husky girl in the top row. The image quality of the husky and the dragon undeneath are due to being saved as B&W GIF images, so no image tones. By the time I got to drawing the vixen at the bottom I had extended my inking to a brush, and used colour pencils for colouring. No digital art and scanning at this stage.

Column 2 - 1997
Still using traditional ink and coloured pencils for artwork, though by now I finally had a decent scanner for archiving my images as well as sending fanzine submissions overseas by the then cutting-edge concept of email. The middle picture marks when I left my old job at Telecom NZ for IBM, a "take this job and shove it" moment featuring Telecom's then-advertising mascot Spot.
The vixen at the bottom was drawn when I was involed with RP on "FurryMUCK", being drawn for a local NZ furry.

Column 3 - 1998
The vixen in the middle of the column is my first attempt at "painting" - in thise case, with watercolour pencils.

Column 4 - 1999
The top picture marks a work trip to the Phillippines where I met Filipino furry artist Rommel Ignacio, here Rom and his OC Tamara are driving one of Manila's (in)famous jeepney buses while Mayfurr is holding on for dear life on the roof... :-)
I was still using traditional ink and pencil media at this stage, mostly due to it being eaasily portable and bypassing issues with installing non-work-approved software on a work laptop.