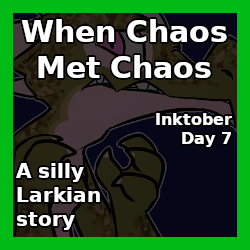 Jobe is a very young mouse boy in a coastal fishing village. As such, there's not a lot for him to do. The other children in town aren't very interesting, and the traveling teacher isn't around to take up their time either. So, despite his mother's repeated warnings and punishments for traveling beyond the town's border, Jobe finds himself exploring the small forest just outside of town once more. But strange creatures lurk in the wild, and one might eventually find the vulnerable, impressionable mouse a tasty target...

Sixen is perhaps my newest full character, replacing Jules Tiago for that position. She's one of the primary NPCs in the Pathfinder game I run, a strange kobold who has set herself up as a merchant in the desert city of Oreath...selling plain rocks. None of them register as magic to discerning eyes, and few of them are of particularly rare minerals or gems (and those are usually not of any quality or shape to be utilized anyway). But she makes her living, and her enthusiasm is infectious. I enjoy playing her a lot.

While I couldn't write a story that would reveal too much for my Pathfinder group, this nonetheless captures her before-campaign state quite well. I hope you enjoy this cute romp and exchange. It's the first story I've written in months due to how overworked I am this semester, so it's very rough around the edges, but I hope it's enjoyable nonetheless.