Yardville - The Main Bads by MalGV 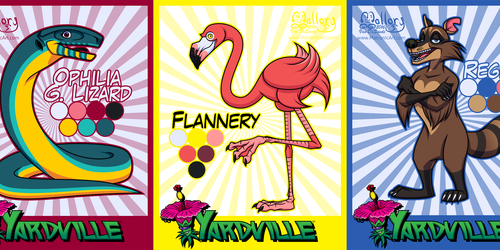 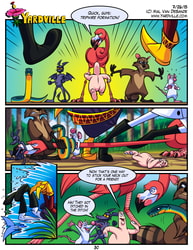 And here's the last of the main cast of my comic series "Yardville". These are the "villains", or that's what they would want you to think. In reality, they suck worst than Team Rocket.

Skelda the Witch Doctor Witch: grumpy, cunning and easily the smarter member of this trio. Her design (and character) is meant to be a hybrid between maleficent Eastern witches and the more benevolent Witch Doctors.

Dr. Howard Wattzinniger: every bit as mad and radioactive as he looks. He is also the guy that Handy the hand became detached from, which is why Howard has a mechanical claw-hand there.

Sawzburg the literal Chainsaw Shark: he is obviously inspired by the Sharknado movies, which my family and I enjoy. He's the "pet/son" of Howard and Skelda, and is often their "Igor", carrying out their dastardly orders.

This is it for the main characters! There's gonna be some minor/side characters here and there, but the stories will mostly revolve around the main cast.

Yardville and characters are © me.