Wolf in Bug's Clothing by Mad-Monty-Zuma 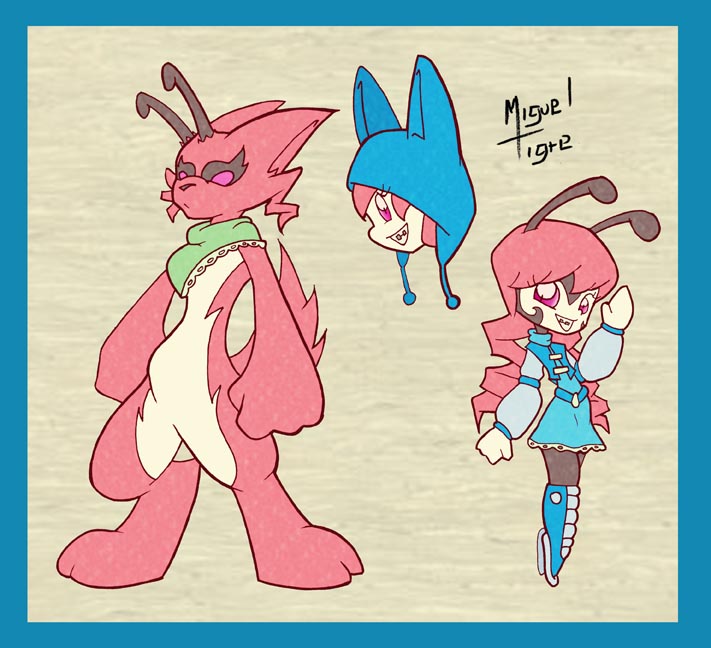 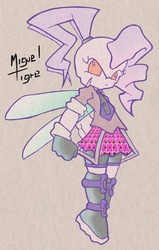 Okay so here's a look at the new Miranda. Her outfit's a little more modern but still very much what you'd expect a social butterfly of girl to wear. ( well .. she's hoping anyway ) Trying to live up to her mother, she fails at it miserably. Though she at times is oblivious to it, she continues to pay no heed to anyone who says otherwise. ( even Em who is actually riding these snide comments right now. Hey all, be with you soon. XD )

Always upbeat and cheery she does her best to give the world a warm smile. ( metal mouth that she is. Does she even know she has braces on?!) She puts her best foot forward and makes herself known. She also tends to be the go-between Em and Tres as neither likes to chat nor spend much time together. At home she does her best to help but having been raised as royalty in a castle, ( and doing NOTHING to stop being spoiled. Okay okay last one guys. XD ) she can't even sweep without breaking the broom, things around her, or even herself. Despite her frailness and childish behavior, she tends to become more aggressive and brave around the rising of the full moon. This was never understood till the day she saw the moon for the first time and changed.

Miranda's Loupe Garou was uncontrollable at first as it ran wild and tended to seek out Em. However slowly she came to control her new form, despite her heightened senses tending to make her seem to have ADD. Miranda HATES her other form and would rather suck rocks at the mucky bottom of a stagnant for years pond than transform. However events and things happen to where her heart gets the best of her and she'll succumb to her transformation. Also she tends to run off to where no one can see her when she's about to change or is willingly going to let it happen. Only Bam's been witness to her transformation as of late as he usually acts a method of security and control. ( Bam's held her hand before she she changes, which usually ends with his hand getting crushed by an enormous paw at the end. )

Miranda's Loupe Garou has no weakness to silver and such as it's not really a curse so much as it is a side effect of her powers. She can also talk in this form but hates to as her voice sounds raspy and scary. ( think Vin Diesel with a sore throat ) However she also seems immune to harm and sickness as shown when she tangled with the real Loupe Garou that was attacking everyone. Miranda can change at will as mentioned before but seeing the moon or rather full exposure to it causes her to change whether she likes it or not. Once dawn hits she'll start to slowly change back as will being exposed to something calming. ( she was once given 20 pounds of "death by chocolate sundae cake" which did the trick, but made her sick soon afterwards )

Oh one more um embarrassing fact: That's NOT a neckerchief around her neck, that's her camisole/slip that she wears under her clothes. Look I CAN'T have her naked when she changes back folks, she's like 9 and her changing back happens a lot of times away from home. When she changes back she shrinks back into it and she's semi-clothed. ( think early She-Hulk ) Though she is naked the first couple times she transforms, I decided NOT to make it a continuous running gag. ( unless she's home behind clothed doors, then a naked Miranda is her family's problem XD )

Anyway I'll have the other girl up soon. Oh and yes, ironically... she DOES tend to wear a wolf hat. ( she thinks it's adorable )
MT