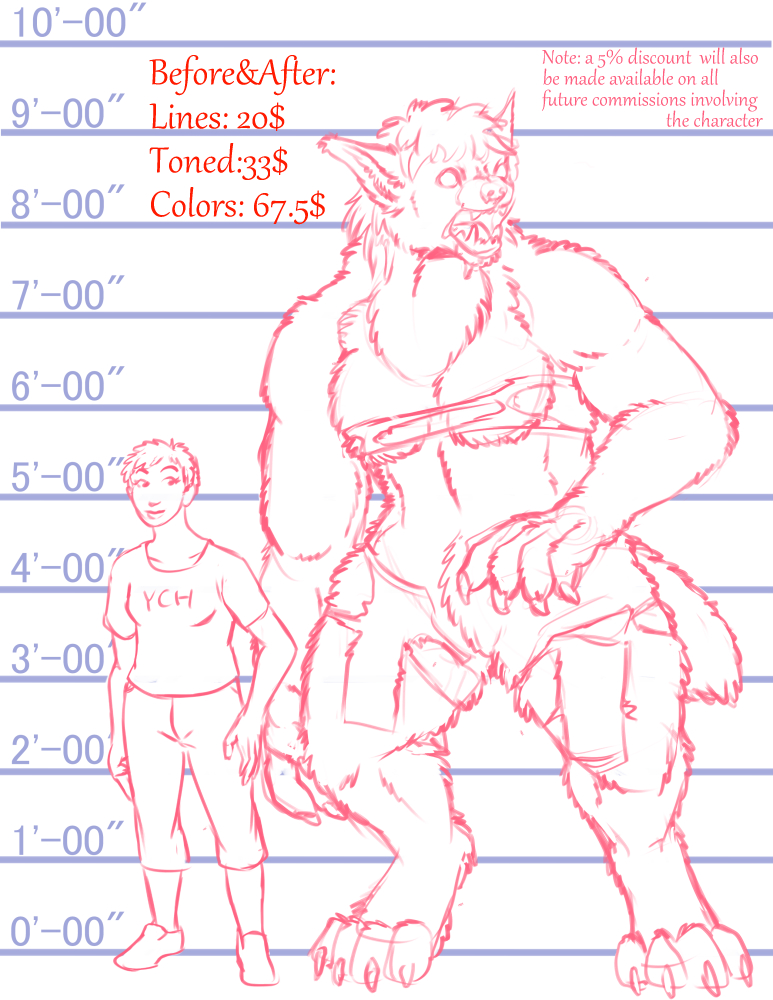 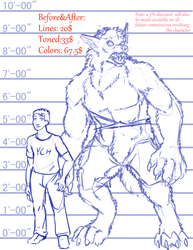 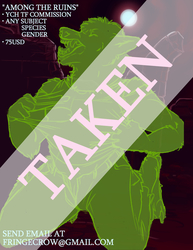 To commemorate this month's supermoon I am now opening preposed commissions for people's characters as various types of werewolves : )
Being preposed, these benefits from a 10% discount over my usual commissions rate. Not that there will be more than this design made available today and during this month.

Ever since the appearance of this particular subtype, now thought to be a deviant mutated strain loosely related to Lupus Sapiens, Lupus Brutus has striken the imaginary of the population as far as werewolves are concerned. These giants, more frequently known as "brutes" by experts or the colloquial "hulkwolves", always make it to the headlines when an infection is reported... generally through the rampage of the newly infected.

Thankfully their numbers are low, in no small and sad part due to the high level of brutality that victims of "lupus brutus" suffer at the fangs of the werewolf often lead to a very low chances of survival... and the strain's fearsome reputation due to the frequent states remains are found in. This said, as seen in the "New York Full Moon Disaster" of 2017, there has been case where Lupus Brutus infected have infected not one but multiple people during the intervention of public security forces. More impulsives than most other lycanthrope, Lupus brutus will immediately abandon any current prey when distracted by pain or other such stimuli as weapon fire. To this day, 23 infected survivors are of the massacre which left 98 dead are still accounted for. Most of them now resides in high-security facilities specialized in the cares of hazardous conditions such as uncontrolled lycanthropy.

Many drugs have since been developed to stall or stop the changes in infected lycanthropes. However, the great majority of them have major side effects(such catatonic behavior or state in the best cases, or creating an imbalances in the genetic makeup of the users which leave them with minor lycanthropic features even as humans as well as increased levels of residual instincts in some). And even with these drawbacks, most of them have been shown to only stall the changes at best and even with the best performing drugs it is now known that stalling a lycanthrope's changes too long can often leave to physical and mental health problems in the users. This is particularly notable in Lupus Brutus, whose strain is the most resistant to the majority of treatments, often requiring extreme categories and dosages of drugs to keep under check.

Physically, Lupus Brutus is most commonly known as the most imposing of the better documented strains of the lycanthrope genus. Most sizes from 9 to 10 feet tall, individuals of 8 feet tall generally being amongst the smallest. Some specifically imposing individuals have been rated as standing over 10 feet tall to reaches as tall as 12 or 13 feet tall. It is also one of the most physically fit strains, possessing enormous musculature(which is responsible for it's colloquial name of "hulkwolf") and impressive strenght. Lupus Brutus individuals have often been filmed lifting and throwing cars in their rampages or breaking doors with their fists in an attempt to reach at potential victims hiding inside buildings.
It is also a much less stable strain than the most commonly encountered Lupus Sapiens. Many individuals suffers from minor mutations such as furless faces or hands and feet, or complete lack of tails. At least one individual is known to lack any fur beyond areas "natural" for humans in their changed form.

Psychologically, Lupus Brutus is also befitting of it's "Brute" designation. The change is often a great psychological strain that results in heightened aggressivity beyond what is normally seen amongst other members of the lycanthrope genus. It is often so high that such aggressiveness tends to leak through even when the infected is in human form, which often needs to be medicated. Critical thinking as well as the ability to form cohesive thoughts is also greatly impaired in this state, leaving most infected unable to communicate as they rage in their werewolf form.
There has been reports of some individuals still being capable of stunted speech, of complexity similar to a very young children, but even in those case it is rarely a sign of greater self-control more than one of more directed aggression as the infected lash out at what catches his anger and aggression in the moment.

With such aggressive behavior, and highly territorial instincts, Lupus Brutus tends to form relatively few pack. When two members of the strain generally meet, they are more likely to fight together for territory than hunt as a pack. Which is generally beneficiary to any who might be in the area, as Lupus Brutus tend to be such opponent to each others that they are generally too distracted to turn their attention to weaker victims.
Nonetheless, in regions with greater amount of wildernesses, there has been at least two documented cases of Lupus Brutus individuals being adopted by packs of savages "lesser" werewolves as their alphas. In both cases such packs proved to be highly aggressive and territorial, hunting without regard for prey stocks. They were also noted to be relatively disorganized due to highly aggressive nature of Lupus Brutus, with cases of the later showing little regard to the wellbeing of packmates. Nonetheless, in both cases operations to neutralizes both packs have led to multiple infections of both Lupus Brutus and the other strains found within both packs due to the resulting fighting. Pack neutralization tactics were however quickly revised ever since.

All in all, despite it's violent tendencies, Lupus Brutus as an infection generally spreads not through it's rampages(though it is still close to one of the leading causes), but instead through intimate contact between the newly infected and noninfected individuals. At least half a dozen documented cases involved the spouse of a recently infected Lupus Brutus individuals catching the infection through contact in human form. Though it is known that lycanthrope saliva is much less infectious in human form, Lupus Brutus has occasionally proven that the risk is still present