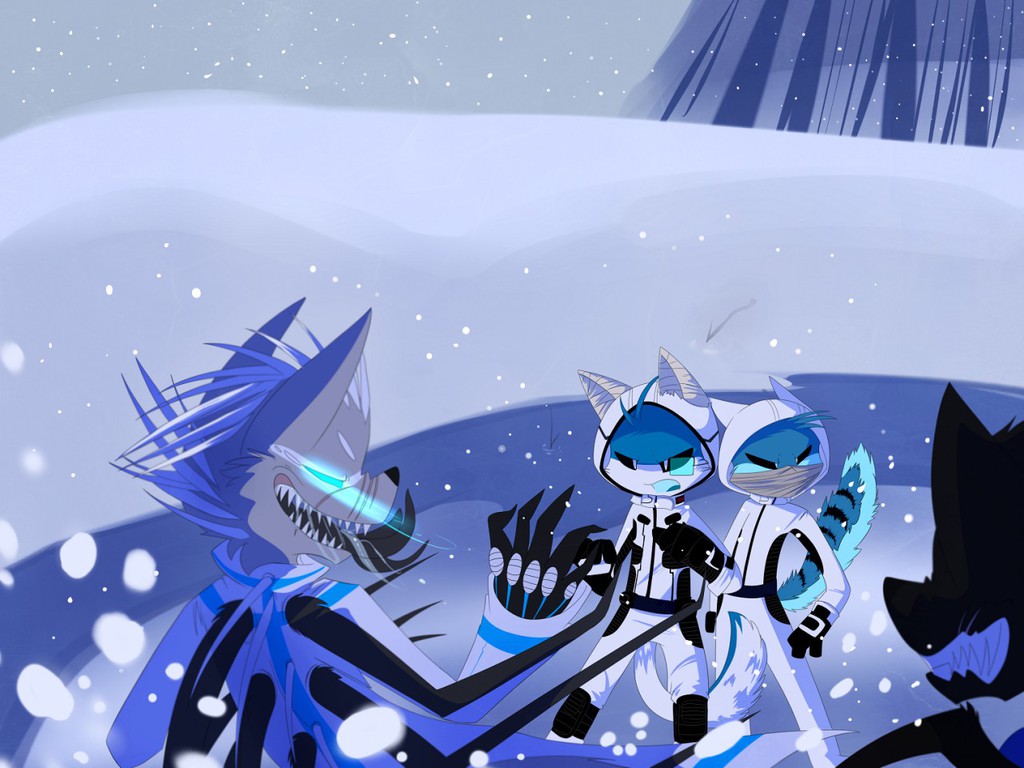 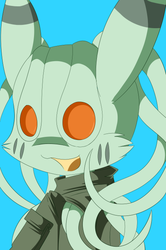 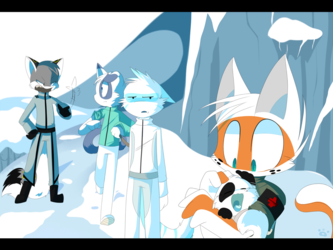 tl;dr:
This is a picture of Loan Shark and its slightly younger sibling, Swordfish, being confronted by a couple Qwujakuhl. Namely the renegade 'jakuhl that killed one of their parental units, and attempted to kill Loan Shark and Swordfish as well--which goes against the battle guidelines the Qwujakuhl are led by. Although he was stopped by another Qwujakuhl before he could kill the kittens. All that took place prior to the kittens being transferred to the main base.

*For those who are reading the thing below, I didn't typo on typing brother/he. X3 It's deviv army guidelines that they call each other 'it' when working, but, well things got intense. Sometimes makes a deviv ignore such things when emotions be running high, yeah? XD

The lone howl of a Qwujakuhl pierced through the cries of gusty snow drifts. Loan Shark’s wrapped ears perked up, beside it, its younger sibling stopped, tail fluffed as it gazed around with sharp eyes. Silently the two moved on, ears filtering through the complaints of the wind to pick up any other noise. Noise that might suggest the approach of other creatures. Qwujakuhls should not be in this region, it was Qwuedeviv territory—undebated and unchallenged.

“To your left.” Loan Shark meowed to Swordfish as it turned sharply, ears flattening down against its head. Swordfish did likewise.

In the distance two shapes moved towards the Qwuedeviv—large from what Loan Shark could tell, likely Qwujakuhls. But Qwujakuhls shouldn’t be here. It dug its boots firmer into the snow to resist the urge to run the opposite direction. They were on their own territory. Loan Shark was sure of it and it was a disgrace to run with your tail between your legs on your own grounds, even if the creatures were frightening.

The two Qwujakuhls slowed as they approached—the leader was light gray, wearing a long coat of white with blue markings. White quills lined his head and back while quite a few scars covered his muzzle. The other seemed to be mostly black.

The lead Qwujakuhl gave a growly laugh as he circled the two Qwuedeviv, drool stringing from his spikey toothed mouth. Loan Shark’s gaze followed the creature whilst tracking the other Qwujakuhl by sound. No doubt Swordfish was watching it closely.

“Well what do you know?” The Qwujakuhl growled. “Two Qwuedeviv, all alone.”

“What do you want? This is our land. We have an agreement with your kind.”

“Ah, that may be.” The Qwujakuhl chuckled. “I’ve never been fond of rules.” One of his many tongues slurped at the side of his mouth.

“What you do or don’t like is not our concern.” Loan Shark replied.

“Yeah!” Swordfish chimed in. “Get your filthy pelts off our land!”

“Oh?” The Qwujakuhl straightened himself up briefly and sneered. “Bold words from a couple of lost kittens with nowhere to hide.” The Qwujakuhl began circling the two again. “Funny, you weren’t so bold last time we met.”

“You don’t remember?” The Qwujakuhl continued, feigned surprise evident in his tone. “I thought for sure you would,” his grin widened, “with the whole seeing your precious father killed so easily…”

“Ah, yes, does that sound familiar?”

Flash backs swirled through Loan Shark’s mind. Its parent rushing to rescue the cluster of kittens from savage Qwujakuhl jaws, only to be quickly and ferociously met with flesh tearing teeth, claws and powerful, puncturing, spider-like legs. The massive Qwujakuhl lunging to snatch its sibling, stench blinding all its senses. Its own claws sinking deep into the flesh of the Qwujakuhl’s muzzle as it rushed to protect its sibling. Teeth puncturing its back as it was ripped form the floor and shaken back and forth.

Blinking, Loan Shark shook its head, ears flattening down against its head, a growl rumbling deep in its throat.

“You tried to kill my brother!”

“Tsh, yeah,” the Qwujakuhl sneered, “took you long enough.” His ears flattened against his head as his quills jutted up defensively. “I’ll finish the job this time.”

Loan Shark moved in guard its sibling, matching the Qwujakuhl step for step as the creature lunged from place to place, still in a circular formation. The other Qwujakuhl likewise circled, but at a slower, swaggering stride.

“You destroyed my family and my home. You’re not coming near him!” The blue and white Qwuedeviv’s fur fluffed out. “I won’t let you.”