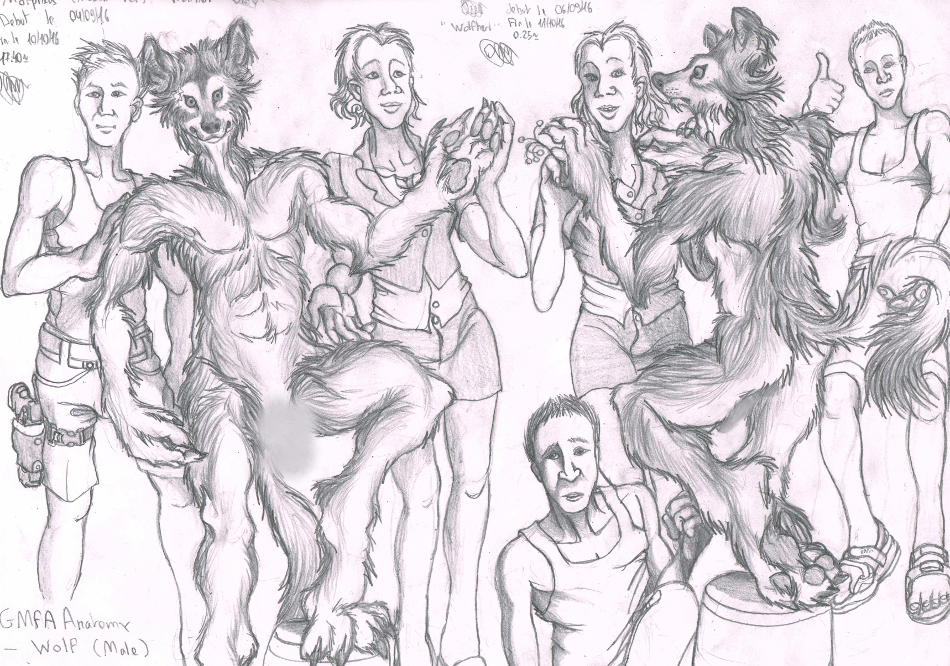 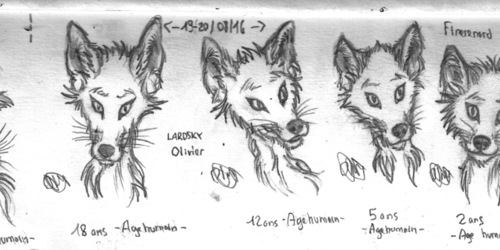 Finally a drawing with a more constructed Anthro anatomy. In advance, sorry for the possible spellings...

As i see, other trainings like this one will be necessary (i'm still working on the anatomy of the anthro wolf so it still a bit hesitant).
I censored his private parts.

For imaging purposes, to see physically who are the GMfA. We must find at least one representative of each species / sub-species who will accept being dragged on these "photo shooting". Now it exist "GMfA models" who accept (more or less willingly or at least find that enough amusing to do so) to participate on these sessions.
Being "over-dressed" (meaning they already have somewhat clothes on them with their fur but dress for utilitaries reasons but some GMfA use them also as territorial use). This is not so difficult to make them undress because of the French Polynesian's blazing heat.

This "photo-shoot- can be difficult with certain species, especially Wolves who tend to always stay near of their respectives Wolfpack and sometime keep a certain distance with us humans (probably inherited from their four legged ancestors but strangely the difference is that they now are somewhat equal to us). The character her was the perfect "guinea pig" thank to a strange habit he developped.

--> Morpheus (Canibipedis lupus lupus), named "Cross" at first but this nickname over the time became his real name. He is the third GMA Wolf born in the "Phosphore's Wolfpack" (named after his Alpha). Nearly 40 years old (or his human age equivalent for that matter), he developped a strange habit, wandering on the place (the labs in wich he currently live), searching for stranger's bed(stranger meaning here everyone that's not part of his family Wolfpack and his possible human surrounding) to lay down in (or sleep sometime at every time of the day or every place). He seems to completely ignore (or inhibit) any human presence on the place or sometimes in the bed (!), or what's happening in the place when he come in.

This behavior remain unexplained because Morpheus today is still integrated to his Wolfpack, doesn't seems to be an Omega in this one (this could have possibly justified or explained these trip giving that he isn't prevented by any mean to do so) and always still have normal social interactions with his own family. So he developed this behavior all by himself.
Of course he have his own bed in the room he share with his Wolfpack (an enough big one to occupy an entire room). It does exist a tendency to swap beds between them when they seems to want to do so. But still, he is the GMfA to have shown this particular habit.

There is an hypothesis saying that it can be a derivative behavior coming from the Wolf. The "Roll"(RL), used for covering himself with an unknown and attractive odour. But if so, why only on beds? Since the soil also is covered with and some GMfA showed that they don't mind to sleep on it (but generally on place they can consider as their territory).
Do he want to ally a sorta-natural behavior (dont forget it's a brand new specie we have here) to a sensation of comfort?

In the GMfA Wolf Ethogram, this behavior was named "Bed Shifting (GBS)", this can be temporary until an behavioral explanation is found for this one (French Ethogram currently does name it "Nomad Sleep").

Being used to see humans during his walks so he is far more approachable by us. Making this "photoshooting" easy to happen.

The "Olecranon" is more apparent on them than it is on humans (or on "Fuergats" who give their genetic material for the GMfA). This does limit a bit the possibility to them to stretch their arm, some GMfA did use this particularityn, for example as an blunt weapon (with more or less dexterity).
The Wolves also divert another of their physical particularity, their "Ulna" bone is also more apparent. Some of them give a violent smash on every surface to do a lot of noise (similar to when they violently chatter (honestly i'm not sure about he expression here)their fang for intimidating purposes).
No one were injured by doing these, so it mean that even if their biology is still constructing, they are better adapted than the previous generation of GMfAs.

On a side note about this character, he is the brother of Garyan that was previously drawn here. So he is one of the uncle of Algonquine.
_
Morpheus the GMfA Wolf was created © by Olivier Lardsky.