Atlantis: The Aquatic Avenger by LordJaguar 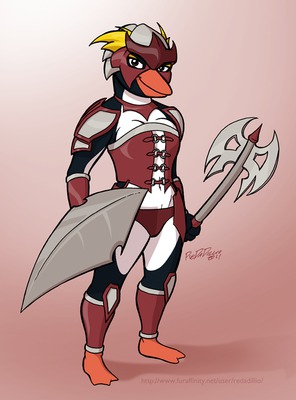 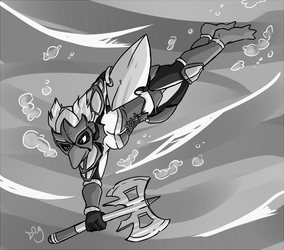 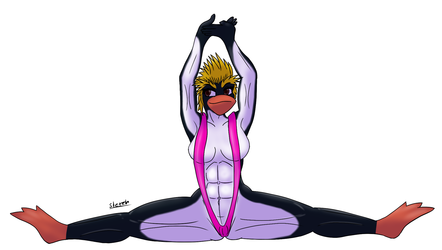 Name: Melissa Thatch
Species: Rockhopper Penguin
Hair/Feathers: Yellow and Eyes: Brown
Height: 5’6
Weight: 114 pnds.
Gender: Female
Sexual Orientation: Straight
Hometown: Orlando, Fl.
Age: 27
Occupation: Archeologist, registered super-heroine.
Relatives: Otto Thatch(Status unknown), Mother (unknown)
Biography:
Being the daughter of a crackpot archeologist has its upside, Melissa likes to say. The daughter of a disgraced scientist who claimed to have discovered the ancient secrets of the Lost island of Atlantis, she grew up hearing tales of fantastic science and unbelievable myths from her father. Despite her unusual father Melissa eventually gained a doctorate from the University of Florida in archeology. While working on a dig in Arizona she received word that her father had disappeared while on one of his searches for Atlantis. Returning home she found that her father had willed to her the contents of large storage locker contain what he called “her mother’s gifts”. Having never known her mother and never gotten any answers from Otto about her, Melissa quickly went to the locker and found a treasure trove literally. Her father’s life work was before her, trunks filled with gold and jewels, ancient texts, and metals of a kind she had never seen before in her life. Otto had discovered more secrets about ancient Atlantis than most furs had ever dreamed up, and had kept it all a secret. On reading her father’s journals Melissa found out that what her father had been searching was a grand text of all the alchemy secrets of Atlantis. If found and translated it would provide secrets that would revolutionize science. All the world’s problems could be solved from energy to food production. Or it could destroy the world just like it had the lost civilization. Her mother’s gift was a suit of Atlantian armor weapons with a note in ancient Greek said was just for her, and we will meet in time.
Melissa Thatch has since established herself as an aquatic super heroine, Atlantis, she was recruited into the B.O.S by The Reveler. She suffered through the loss of most of her class along with Mad Hat and the two remain close friends to this day. She remains stationed in the New Orleans B.O.S but is on call throughout the world as one of the best underwater agents available.
Powers:
Armor: Atlantis’s armor allows her to remain submerged underwater for indefinite periods of time, it also gives her enhanced strength and invulnerability.
Shield: Atlantis’s shield can absorb any attack and redirect it. Or it can transform it into energy and feed it into Atlantis’s armor for a boost of her abilities.
Ax: Atlantis’s ax can slice through almost any material. It is super sharp and indestructible.
Attitude: When you meet her you’d swear that Melissa is a California surfer girl. She is laid back and fun loving. The only thing she seems to take seriously is her search for her father and her continuing research into the Atlantian lore he left her. She isn’t very supportive of the Registraition Act as others in New Orleans and I accepting of unregistered supers if they have proven themselves in action.