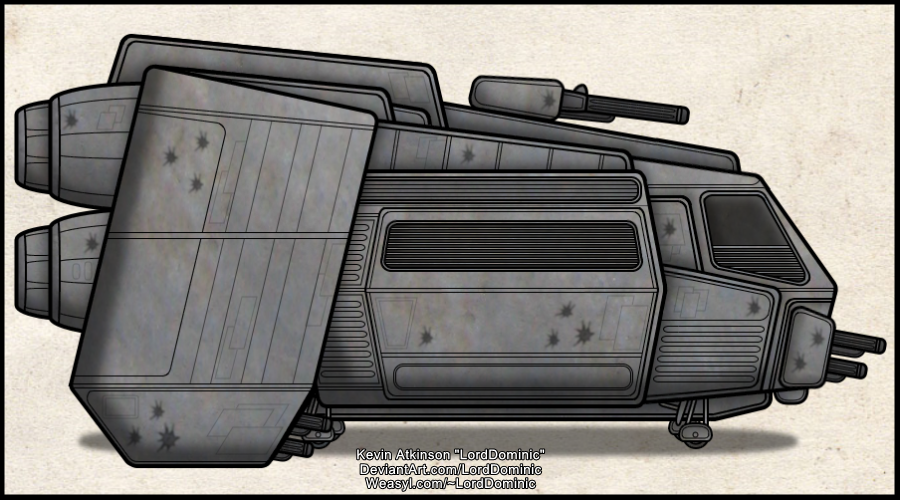 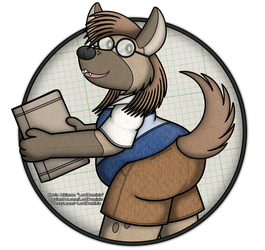 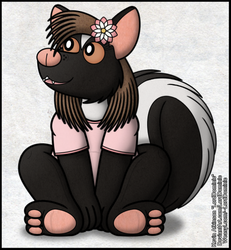 The main differences between the V-100 and V-300 series is the V-300 series including wings, which house additional thruster banks for improved power and maneuverability, and a slightly larger crew cabin and cargo/passenger bay.

This particular V-380 has been modified for use by a police force as use as a light assault craft/prisoner apprehension and transport vehicle. Armed with five twin pulse-cannon turrets (four forward-facing, two on the front and one on each wing, as well as one between the engines covering the rear door that's not visible from this angle) and one mid-sized anti-vehicle cannon on the top. The forward-facing repeating cannons are fixed-position, the pilot aiming them by maneuvering the ship itself, while the one in the rear and the top heavy cannon can be aimed by a gunner using controls in the crew cabin. Additionally, this ship is equipped with heavier deflector shields than the factory-standard light deflector/aerodynamics field projector array, and the wings house six light missile launchers (three on each wing), typically armed with light homing missiles.
While the set-up does have some limitations and weaknesses, the modifications are relatively quick and inexpensive to perform, and still quite effective for their intended purposes, while also not requiring a great deal of specialized training on the part of the crew to use effectively.

Such modified V-380s are commonly used by police forces, specifically SWAT teams, as light assault craft, squad transports, and to transport criminals to and from prisons and other holding facilities. Due to some criminals being involved with dangerous gangs (either as members, or as targets of said gangs) it's common to see prisoners transported in such craft as the gangs may try to liberate or eliminate the prisoners during transport or when landing at the destination.
While not common, it is possible in some instances for these craft to be commandeered by criminals, which is how Rigel managed to escape a prison ship at some point in his life. He and Aludra have made use of the shuttle ever since, as their personal assault craft and getaway vehicle, and Aludra has even used it to break Rigel out of prison again at one point by posing as a Federation officer sent to transfer him to another facility.