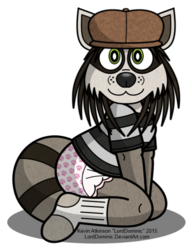 2015 art, some non-canon/alternate universe fun with Penny Possum. Drew this one at a time when a friend and I were hardcore into Borderlands 2.

After the Possum County Country Diner closed down, Penny Possum became a bandit leader operating out of the local junkyard. The scrapyard was full of useful parts to not only keep herself running, but to make her mechanical body even tougher and more powerful.
Armed with the "scrapper flakker" cannon that flips over her shoulder when in use, and her trusty "scrapper smig" which she built herself, she's ready to treat every day like it's a Mad Max movie or a Borderlands game. Not shown is the "Scrapper Shotty", a big ugly double-barreled "street sweeper" shotgun perfectly suited to a big ugly robot possum.

What a lovely day!

Just an idea that's been knocking around in my head for a while. I've seriously been considering weaponizing Penny and having her spend some time as a soldier or mercenary or something, just to shake things up a bit.
My original vision for this concept had her "battle gear" being an old firefighter's outfit (coat, gloves, pants and boots) she found in an old fire engine, along with a fire axe, and one of the doors from said fire engine as a shield, rusty and dirty but with the Possum County Fire Department logo still faintly visible on it. While I stuck to that basic idea for her clothing, I skipped the melee weapons in favor of a gun because guns are cool.