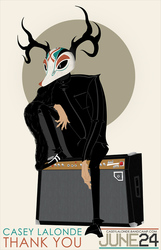 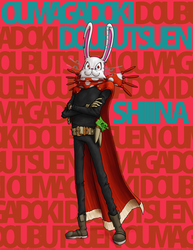 This one was a tough experiment. I learned how to model with NURBS in 3DsMax on the fly, in order to pull Headjack's mask together, required in 3D to speed up production of promotional material (the model was made one week after I'd made [this image]). Casey LaLonde and I were producing a promotional video together, while I was also preparing for a flight to the United States, where I would have no choice but to complete the video on my laptop.

Unfortunately, I hadn't accounted for bugs when transferring the video work file from my desktop computer to the laptop, and the video was ultimately given up on. But it was also the furthest we'd ever gotten on an animated project together. Next time, we'll know to set a release date -after- the promotional material is completed — Something we would have done if it weren't for our trip to AnthroCon (at which half of the physical CDs for [Thank You] were sold).

Meanwhile, antlers are the single-most time consuming element to render and model, especially when there's a set design to them. Five days spent modeling and texturing this thing. I am not a 3D modeler in the slightest, ahahah.