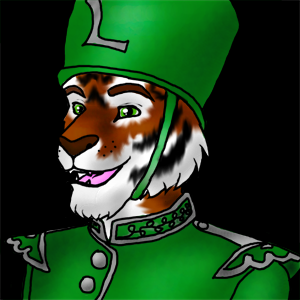 Leo the Tiger, Bandmaster of Kriegland

Free picture I won from a raffle by a user that evidently is no longer a user of FA, xx-noxy-xx. I still appreciate the great job she did; this was her first time doing a band uniform.

This is the character my profile is named after, Leo the Tiger. Leo hails from a planet known as Kriegland, and came to America upon the great migration of the whole population, escaping just hours before the villainous group known as the Quarrelsome Quartet destroyed the planet with their Laser Beam 5000. Leo is the drum major of three bands at once: a military-oriented band, a showoff marching band (like at college football games), and a pipe and drum band. While all these bands have only civilian tigers serving as professional musicians for a living, Leo calls his first band a military band due to the instrumentation of it, particularly in the percussion.

Leo's best friend is John the Tiger, the drum major in charge of the actual Krieglandonian military band, and hailed by Leo the Patriotic Lion (an American lion composer) as the Sousa of Kriegland, and a musical symbol of Krieglandonian patriotism. Since arriving in America, John and his band (and later Leo and his three bands) have regularly received 25 times as many loyal concert attendees as the average big name in pop and country music, and part of that was due to their role in assisting Leo the Patriotic Lion and his enormously successful campaign to get Americans back on track in the wake of the Kriegland tragedy and the disgust that followed the Vietnam War.

Leo and his showoff band were invited to participate in a band competition held at the academy for the eternals upon invitation by the prince of the eternals, Prince Zanta Alexander Keplicus the Third (the character played by FA user 16weeks), with Leo the Patriotic Lion serving as a judge to represent Earth. They participated with three other bands, with a separate section held just for the drumlines. Leo and his showoffs won by a landslide, and the prize was a vacation home for each and every member of the showoffs (including Leo), and a cash prize of $2 million to put to good use. Leo chose to donate the whole $2 million to charity, since he believes in giving the best performance a band can give, making all the hard work pay off, and that itself shall be their reward.

Leo is currently looking for more tigers to expand his bands so that the military and showoff bands will have about 250 to 300 tigers each. That way, he says, it will sound more civilized.

Art © xx-noxy-xx, who is no longer active on any website (as far as I know).
Character © me; leothetiger
Zanta © FA user 16weeks