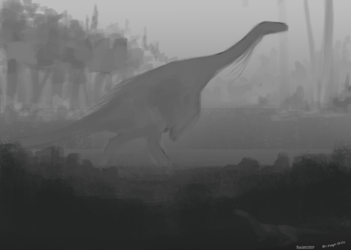 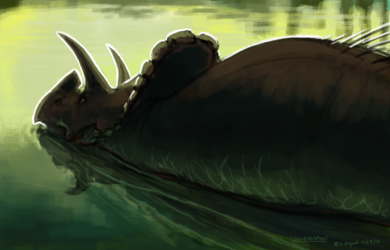 Totally failing to show off that it is a freaking GIANT Caenagnathid, by lack of size markers, and the fact that you can't even see its head. My urge for dynamism struck again.

"The diet of Gigantoraptor is uncertain. Although some oviraptorosaurs, such as Caudipteryx and Incisivosaurus, are thought to have been mostly herbivorous, Gigantoraptor had long hind legs with proportions that allowed for fast movement (it was probably more nimble than the larger and less agile Tarbosaurus), and large claws, a combination that is not usually found in herbivores of this size. Paul suggested that Gigantoraptor was also a herbivore and used its speed to escape predators.[3]

The specimen has advanced ossification and growth rings in the fibula that indicate it was likely eleven years of age when it died. It appears to have reached an early young adult stage at age seven, and probably would have grown much larger when it reached the adult stage. This indicates a growth rate that is faster than in most large non-avian theropods.[1]