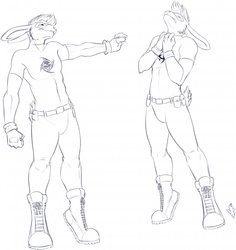 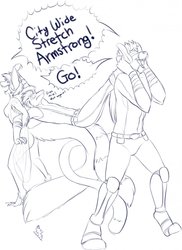 This is Justino Estévez, another BOS operative. He was the second child born in his family and was known to be a troublemaker. His family moved to Chicago, Illinois when he was five years old, allowing him to start a new life in the states. He was raised in the Englewood neighborhood in the city.

As the middle child, he was known to be a troublemaker and eventually joined a local gang known as Los Banditos Rojos as a runner for the gang. Justino and his fellow members caused trouble under the banner "Viva la raza".

On March 13th, 2006, Justino's life began to change. His gang friends were driving around in Washington Park when they were scared aware by the numerous emergency vehicles rushing on the road. The next morning, Justino and his family had learned of a terrible virus that was unleashed in Hyde Park. Justino's older brother, Joseph, joined the Marines and was shipped to Hyde Park to contain the infection.

Justino sneaked out of his home one night to check on his gang's hideout. There, he and his friends were attacked by monstrocities with glowing blue eyes. The gang members suffered terrible injuries, with Justino receiving a bite on his shoulder. For the next week, the young man felt as though he got a rather nasty cold and stayed on the streets despite his family's concern.

Roughly one week after the attack, Justino began to feel rather strange. Getting to his feet, the raccoon began to stretch himself, only to find his arms stretching upwards up to 20 feet in the air. The young man was incredibly shocked to find out about this. After calming himself down for a moment, he decided to test himself by flinging his foot out in a kick. To his amazement, his leg stretched in the same way as his arms!

Realizing what had happened, the raccoon decided to show off his power to his fellow gang members. As he approached the hideout, however, he could see that the place was in shambles. Broken glass and plaster was everywhere with claw marks all over the walls. Shocked, the raccoon rushed inside.

What greeted him was something that would haunt his nightmares. His friends were all inside, torn to shreds with their entrails splattered all over the walls and floor. Bodies of infected feral creatures were lying next to them, riddled in bullet holes.

Horrified, Justino rushed back home to check on his family. As he approached his home, he saw the military rounding up civilians to be evacuated to a safe zone. Amongst them were his parents and younger sister. The raccoon managed to slip himself inside of the truck where his family was and they were transported to The Loop in the Central zone.

Justino had been shaken by the loss of his friends, making him realize how close he had been to leaving his family behind. At that moment on, he decided to forgo his gang activity and help everyone in any way he could. As the months passed, the raccoon trained himself with his new powers while training himself in kickboxing. At night, he secretly slipped out to help people that were in trouble, adapting the alias of Rubber Raccoon. He slipped a simple domino mask on his face to hide his markings and wore a white sleeveless shirt with jeans. On the shirt were the letters RR.

Soon, rumors began to spread of a stretchable super that was helping both heroes and military in fighting infected. At the fifth month of the infection, a surge of infected attempted to take over the Loop and claim it on their own. The BOS had been dispatched to protect the area at all costs. Justino jumped into the fray, not wanting the Loop to suffer the same fate as his old neighborhood. His efforts caught the attention of a couple of BOS agents and the military after he helped them protect the courthouse.

At first, his criminal record as Justino Estevez was a roadblock for the application process. However, his efforts helping the city during the infection helped assure his enrollment as a BOS agent. With a new costume and training, Justino now helps the city as Rubber Raccoon.

Character and Chicago Incident created by me.
Artwork by bluwolf0.
BOS/Colmaton universe belongs to TRAIN and MojoRover.