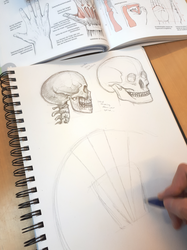 Vaati displays the ability to turn people into stone in "The Minish Cap", why doesn't he flat out kill them? Why does he never turn Link into stone? Why does he only knock Link out and then vanishes?????? and why didn't he turn Ezlo into stone but a speaking cap??? Like... that's not really thought out well, isn't it?

I hate the thought of Vaati being of low intelligence so I came up with a bunch of headcanons. The first headcanon says that the Wishing Cap on Vaatis head that is supposed to "grant all wishes of the wearer" didn't completely obey Vaati as he stole it. I mean it would have been easy for him to just snap with his fingers and kill all his enemies otherwise, right?

The second headcanon says that Ezlo protects Link from Vaatis stone curse with the little bit of magic ability he has left over. I mean he obviously uses magic when he shrinks Link into Minish size so he must have had some leftovers.

The third headcanon says that Vaati is just an impatient, impulsive person blinded by greed so that's what makes him act irrational and careless. Mind that Vaati is pretty young as well (older teen/young adult imo) so he simply hasn't had enough experience the foresee what obstacles would come into his way and/or he was overly confident in his abilities to solve all the problems easily.
Even people of normal intelligence can act stupid sometimes, right? I know I do :lol:

Also the Light Force would transform him into a godlike demon that's why he is searching for it.