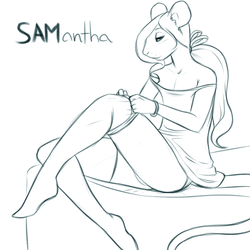 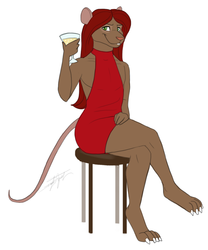 Women saw the world differently than men. Never had it been more apparent to Whiskey until one fateful night when a vixen he'd met slept with him and switched bodies, stealing his form and disappearing into the night with it. He was now trapped in her form, not knowing how to even begin to search for her. He'd met a femmboi mouse named Sam, who allowed her to move in with him and help her get back on her feet.

Despite the audacity of the story, Sam had never questioned her truthfulness. He'd gotten her a job as a messenger and a new set of clothes, as well as a little money to buy some things for herself.

Whiskey had found that being a woman had it's advantages. Though she missed the upper body strength, she found that her lighter form enabled her to defy gravity more easily. Learning the art of parkour, she'd found ways to run faster from place to place to deliver her messages. Though she had to get used to the sports bra and the different body shape, she'd come to almost enjoy being a female fox.

She'd gotten a new pair of sneakers that enabled her to run faster than her old body ever could. Her muscles were well developed.

Whether she would want to return to her old life, she wasn't sure, but at least this wasn't too bad.