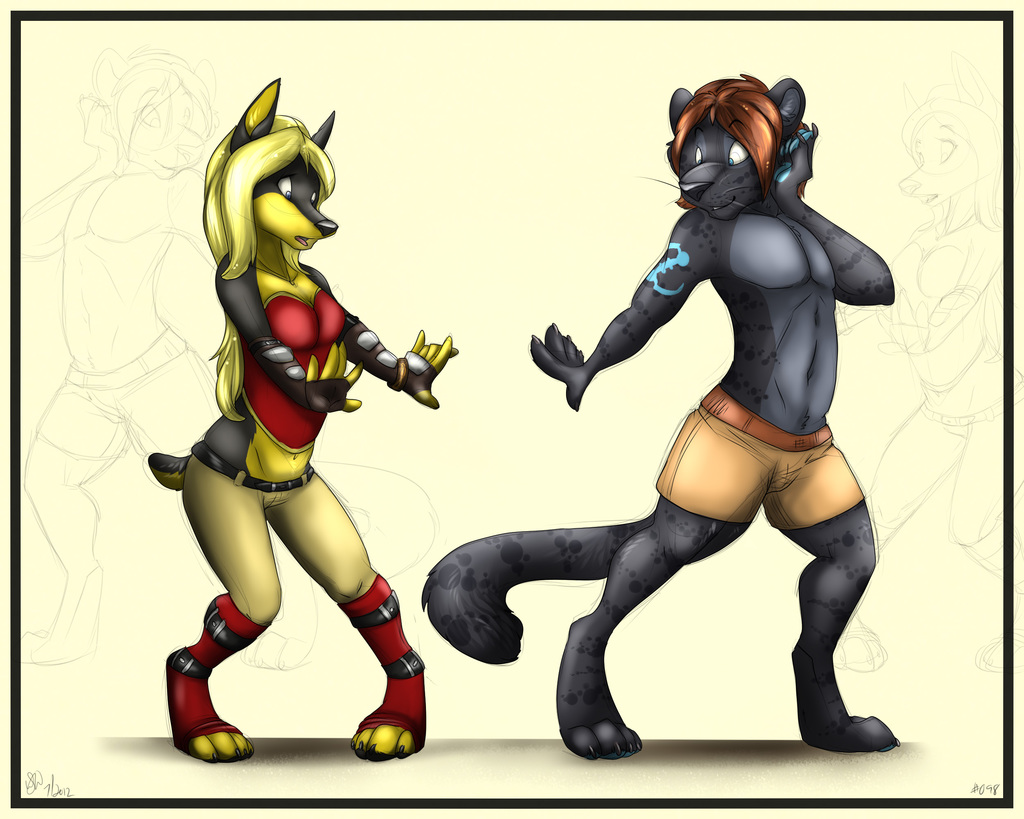 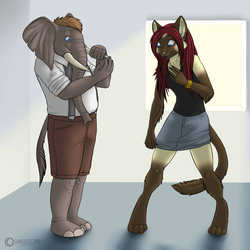 Zhed awoke in a forest glade, with sunlight barely peeking through the trees. He sat up, wondering how he arrived in this place. Dressed only in his boxers, he stood, looking around and finding nothing other than a mysterious bracelet with an inscription on the inside. The jaguar held it in his hands, wondering if perhaps this was how he had come to this place.

"Where in the world am I?" he asked. He could not recall being drunk or otherwise afflicted the previous night, so what had happened? Seeing no alternative, he started walking.

A while later, he came upon a female doberman with a bow and arrow, kneeling over a small pool of water, cupping some of it in her paws to drink.

"Excuse me, miss? I don't know where I am, and I was hoping maybe you could help me?" Zhed blushed as she looked over him, feeling rather underdressed. "I'm sorry for my state of clothing, I woke up this way."

The canine stood, introducing herself as Diana Lynwood. "If you wish, you can accompany me to the town of Vohlt, I am headed there now." Seeing that he had no other options, he walked into step with her. She looked at the bracelet he carried, gesturing towards it. "What is that?"

"I don't know. I just woke up next to it." He offered it to her, holding out the golden bracelet, decorated only with the infinity symbol. She examined it carefully, and slipped it on her wrist. "It looks lovely on you. It is rather beautiful, if simple. I only wonder what the inscription means."

Zhed searched his memory and repeated the phrase. Suddenly, he felt a dizziness come over him, as his vision blurred and his body felt warm. As the warmth spread, he touched his face with a paw, and then pulled it away to see his fur was the wrong color. Wait, not his fur. The bracelet adorned a much more delicate wrist than he knew he had. Zhed looked up to see himself, or rather, his body.

Now in Diana's body, Zhed looked at her paws and down to her chest in surprise. She looked at her stubby tail, feeling very strange in this alien form, both female and canine. "I'm in your body!" he called out.

"As I am in yours." Diana looked at the mark on his arm, and then down at his boxers, where he no doubt was considering the implications of a male anatomy, clearly as alien to the doberman as her body was to him. He still moved as a female, swinging his hips as he walked a few steps.

Zhed frowned. Now, not only was she lost and in another time, but now she was in a dog's body! Today was starting out to be the strangest in her lifetime. They resumed walking, hoping someone could restore them to their original bodies and get Zhed home in the town ahead. "I feel so strange, I've never been a canine before."

"I've never been a feline before, or a male. I still feel female, though." Diana touched his luxurious tail with his paws. "You do have a very handsome body, though I should like mine back, I think."

"Maybe you shouldn't walk so... Womanly. In my time, most guys beat up men that walk like that."

"Then perhaps you should not walk so male. Perhaps I might teach you how to wear my body properly, though I shall thank you not to stare at it when you bathe." Diana took his paws and moved them away from her breasts, looking down at the bulge in his pants. "This body is quite vexing, it seems hard to command this male anatomy to behave, my pants continue to tighten!"

"You have no idea," Zhed agreed, as each taught the other how the opposite gender behaved... Today was going to be a long day, she thought.