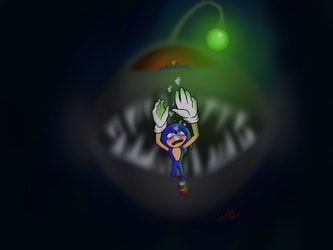 uh ohhhh, i've done it. :eyes: someone has a little crush on jim carrey robotnik >>
i got to see sonic the hedgehog 2 a day early too! an early screening. i'm very thankful to have been able to see it in the theatre, sonic movie 2 was much better than i was expecting it to be. i'll tell you though, I know i was the one who cared the most in that theatre ;3

I'm still writing lore for it, and it'll probably be a while before it sees the light of day. c: especially since i'm not much of a writer. so here's a little slice of life piece i wanna show you guys.
they're watching a movie (obviously) and their hands touch in the big thing of popcorn! :000 big blush energy.

I'm open to ideas of what you guys may want to see c: (which may be nothing, since i may be the only one interested in this)
in the future i'd like to include D/s relationships and stockholm syndrome, pining, maybe hypnotism? i dunno, gotta write. <3