A Vulpine Airwave by KuraHyena

Kyle hated rain, it made everything too quiet. Which was exactly why he kept snapping his fingers while he waited for his friends to arrive, it made noise. They had sent him a text message saying that the three of them were on the way, and it's not like he could blame them running late, a thunderstorm had blown in pretty much the moment after he'd got their message. At least they'd be able to hear the marathon clearly. All four seasons of their favorite show, plus the movies, of course, and all on Blu-Ray in HD? Perfect for some friends hanging out together, maybe staying over for the night.

The bored twenty-something took a potato chip from a nearby bowl, crushing it between his teeth, why did a there have to be such a huge storm tonight? For a while, only the sound of droplets hitting the windows, and the low rumble of thunder filled the room as Kyle continued eating the chips he'd intended on sharing tonight.

That abruptly changed when a puff of smoke rose from the table, quickly clearing to show that a large radio had appeared in that spot.

Kyle stared in confusion, radios weren't supposed to just appear out of nothing, and certainly not with low-budget pyrotechnics. Yet there it was, buzzing soft softly with static. He began to reach for it, to make sure it was there, only to jerk his hand back when it suddenly crackled to life, playing a cheery jingle.

Don't touch that dial, iiiit's Trans!~Fur!~Mation! Radio! And you're our lucky winner!

Did they mean him? That didn't make any sense, he never entered into any contest, and even if he did, that wouldn't explain how this radio just appeared, or how it was working without being plugged into anything.

Okay, now he was sure they couldn't be talking about him. Nobody would ever have called him a fox.

You are a fox? Aren't you? Just a fox, just an animal, right listener?

"I'm not an animal!" He snapped at the radio without meaning to. What right did they have to call him an animal? Just because he was a fox, that didn't mean- Wait, where did that thought come from? He wasn't a fox, was he?

Of course you are, you're listening to my voice with those cute little triangular ears of yours.

Kyle felt a sudden, tugging force on his ears. Red and white fur spreading as phantom hands pulled them out to little points on the top of his head. His hearing growing sharper and more precise as the same invisible tugging pulled them to the top of his head, everything so much clearer, so much easier to focus on. The radio filling his new ears with the show host's soothing voice, reminding him how much of a fox he was...

There it was again! He had to get away from this crazy radio,before it had him convinced that this was normal. He was only three, maybe four steps away, when the radio host spoke again.

You even have a big, bushy tail, like every good fox does.

After what just happened to his ears, he knew what that meant.

But he couldn't do anything about it, as the strange tugging sensation returned, just over his rear, pulling him back to where he started, right in front of the radio that was changing him into a fox, telling him what a good fox he was.

The tugging grew even stronger, pressure building until something ripped through the seat of his pants, sending bits of fabric flying across the room. At the same time, whatever was pulling on him let go, leaving him suddenly falling to the floor.

Laying face down on the hardwood flooring, he could feel something swishing gently side to side behind him. It was a tail, his tail specifically, just like the man on the radio said he had, like they said all good foxes were supposed to have. He had a big, fluffy tail, covered in bright, reddish-orange fur that lead up to an off-white tip. All a sure sign of being a fox.

He didn't bother getting up, the radio clearly had the power to stop him from leaving, so he didn't see a way out of being transformed.

And what about those sock-marked paws of yours, don't those seem like something only a good little fox like you would have?

The now somewhat familiar sensation began working at his hands and feet, pressing his fingers into his hands as black fur spread over the skin. He felt a similar change going on inside his shoes, like invisible hands were kneading and molding his body to fit the radio host's wishes.

Struggling to push himself off the carpet, he felt the change spreading through his limbs. His shoes began to tear as small claws pushed through the front, only for his feet to shrink out of them.

Oh, so that's what he was doing wrong. He just need to take his front paws and... The radio was messing with his thoughts again, they weren't even being subtle anymore. It begins to sink in that he's standing on four legs, and can't make it back to two. He really is turning into an animal, one without hands like he'd taken for granted all this time.

Could this night get any worse?

So calm, just focus on that canine muzzle just in front of you, and think of how beautiful your bright red coat is.

Kyle hated to admit it, but the smooth tones of the radio host's voice were pretty calming. It was easy to listen to, easy to hear that voice telling him what to do. The soft sensation of fur spreading over his body.

The tugging on his nose signalled the final change was in progress, teeth pulled on until they came to the points a proper carnivore's should, jaws extending into a muzzle, as fortold by talk radio.

After what seemed like an eternity, those last changes came to stop, Kyle looked himself over to see a complete fox. It even seems like he'd shrunk out of his clothing somewhere in there without realizing it, or at least the need to climb out of his shirt and pants, or up on his couch to see the tabletop seemed to imply that.

He spent a few moments in silence, waiting to wake up, or for the radio to do something.

A third thing happened instead, when he heard knocking on the door.

His friends were here to watch their show. Maybe they could help him figure out what happened, or how to fix this?

The door swung open, spurred on by the radio host's compelling voice.

*It seems we have a few more guests for tonight's special trans~fur~mation giveaway! Sorry I missed you earlier. Yes, you! The lion! The hyena! And the snake! You are animals, aren't you?"

...Kyle got the feeling that they weren't going to be as much help as he hoped. 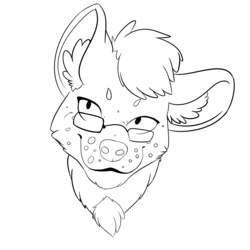 This is my second story here, but I'll leave it up to you whether or not I've improved at all.

A human gets turned into a feral fox by an evil radio, short and to the point.