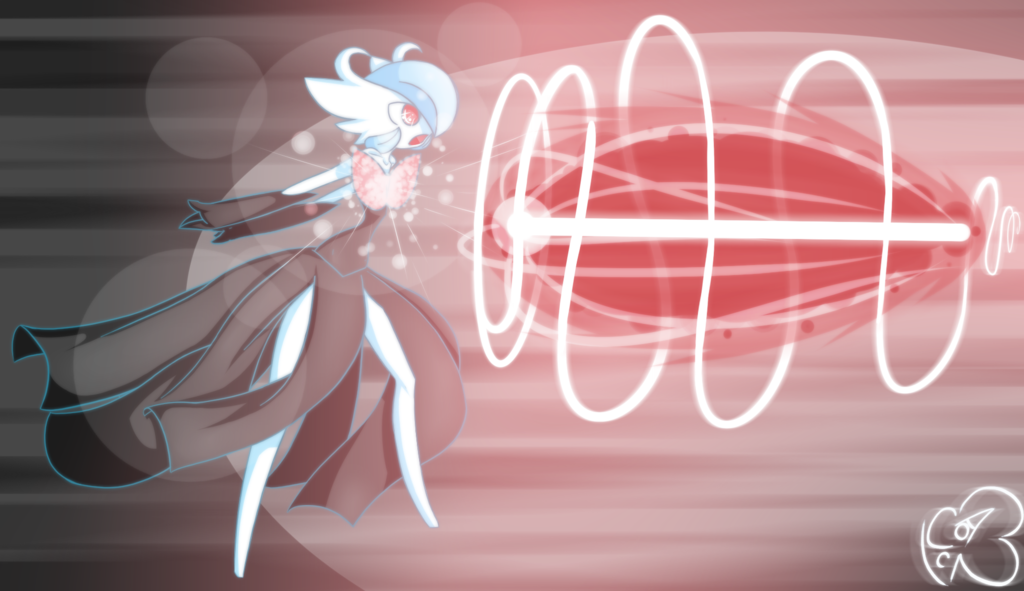 I know what you're thinking: "Recently? Her 3DS broke! So she can't play Pokemon Y!"
You're right, unfortunately. However, I have been playing Pokemon Showdown (Online simulator) quite a bit, so I rebuilt Blossom's set and slapped it on there. Now, all of you Pokemon boffins are also probably saying "Silly Kris! Hyper Beam is a crap move!"
Again, usually, kinda right. However, that's where Mega Gardevoir's ability - Pixilate - comes into play. Aerilate, Pixilate and Refrigerate all have the same basic effect, but for different types and that is to change Normal-type moves (Like Tackle and Tri Attack) into the selected type; in this case, Pixilate turns normal type moves like Hyper Beam into Fairy-type. What these abilities also do is increase the base power of the move by 30%. This also has the effect of changing the selected move into one that is actually the same type as the user, which means that they get the STAB (SameTypeAttackBonus). Let's do the maths!
Hyper Beam = 150 base power
STAB Bonus = +50% base power
Hyper Beam + Pixilate (+30%) = 200 base power
Hyper Beam + Pixilate (+30%) + STAB Bonus (+50%) = 300 base power.
Basically, Gardevoir, my favourite choice of Mega Pokemon, is capable of destroying a single pokemon (that doesn't resist fairy-type) in return for having a turn to recharge afterwards, so I usually keep Blossom until the very last moment of a battle.

Oh right, I'm supposed to talk about the picture too, right.
So, as I was saying, I've been playing with Pokemon Showdown and had fun with using Hyper Beam as Mega Gardevoir. I also found out that shiny Mega Gardevoir looks less like a bride and more like a widow. If I could, I'd get two Gardevoirites in-game, but atm I can't, so once my 3DS is fixed and Pokemon Bank is release, I plan on trading my shiny Gardevoir up to generation 6 and using her as my main Mega Gardevoir - or main mega full stop.

I'll admit, I had a lot of fun colouring this picture. Shiny Mega Gardevoir is very cool looking and Hyper Beam was ridiculously awesome to draw and came out well, in my opinion. So hey, have a change from anthropomorphic horses and instead have a big picture of a pokemon - Enjoy!